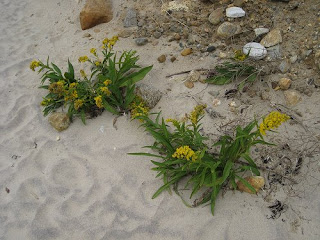 I took a day trip out to Montauk yesterday, riding the length of Long Island on the train so I could walk the beach before the season becomes impossibly cold. I checked the weather before I went and the reports said "mostly sunny," but as it turned out, the skies were metallic and gray most of the day. Only when I was leaving, at about 3 p.m., did the sun come out. The beach was chilly and windy, with only a few surf fishermen standing around in their waders, and a single lone surfer. 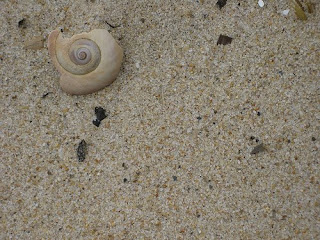 I had an omelette at the Plaza Restaurant, a diner right in the middle of town, and also walked around all the little shops. Visiting Montauk is like stepping back into the 1950s, with an independent drug store, various little groceries and delis, and t-shirt and souvenir shops, now desolate in the off-season. I really like it out there.

The train trip was nice, too, giving me a chance to read and nap. The trees along the tracks were bright with fall colors, particularly in the golden light of the evening, when they seemed to positively glow. 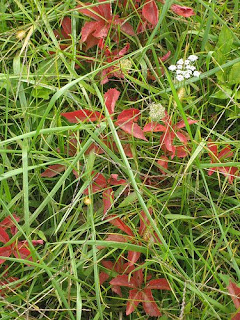 And yet there were still a few lingering hints of summer, like this Queen Anne's Lace, blooming amid the scarlet leaves of this creeper vine.
Posted by Steve Reed at 11:32 AM

Thank you for taking your readers along with you out to Montauk. What a peaceful way to spend the day.

Your description of the beach reminds me of most days at Ocean Beach in San Francisco - cold, windy and overcast. The good thing you can say about the SF beaches is that they are hardly ever crowded!

I could almost feel the damp salty air and the wind coming off the gray water. I love the beach when it is not so crowded with other people and when it is really too cold to even think about going in the water. There is something so therapeutic about thinking while you walk in the sand just above where the water is washing ashore. I hope you were barefoot as you walked on the beach.

This brings back lots of memories, Steve. My mother loved to drive out to Montauk, especially when there was snow on the ground. I remember the biting wind and having the wide expanse of the beach all to ourselves. I don't remember the town, just the beach itself. Great photos, too!

beaches out of season can be just fabulous