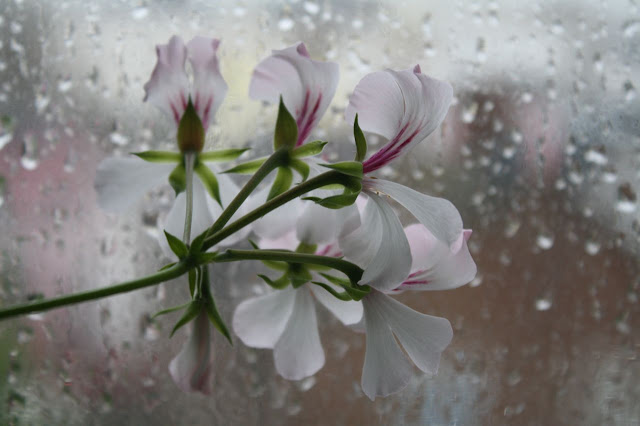 This is what's left of a wonderful trailing geranium that grew on our balcony last summer. When winter came, I brought it inside out of the cold several times -- and then, during one snowy night in February, I left it outside. The entire plant promptly died, with the exception of a few pieces that had been sheltered from the snow. I've been trying to root those pieces in a container of water on the kitchen windowsill, but so far, no roots. Miraculously, the cuttings continue to grow and bloom. Maybe I need to get some rooting hormone and plant them in some dirt.

Also on the gardening front: remember those canned seeds we bought in Amsterdam and planted? Well, none of them ever grew. It's been more than five weeks, and I've just about given up on them. I had a feeling they would amount to naught. The directions called for planting the seeds too deeply. The poor things couldn't get to the surface even if they tried.

As you can see, the weather is dismal today -- gray, rainy and windy. I'm staying inside. My friend Pam flew home yesterday afternoon, and Dave left for a school trip to Munich this morning. So I have several days of peace and quiet all to myself. I feel like I need them, which may seem absurd, given that I work from home and on my own timetable. But between my "London in a Day" walking tour with Pam and last week's activities with Marilyn and Jason, I'm ready to put my feet up.

Pam and I made an impromptu trip to Harrod's yesterday morning so she could pick up some souvenirs for her family. In the nine months that Dave and I have lived in London we've never been to Harrod's. The food halls are overwhelmingly opulent -- the case of pork and veal alone is bigger than the entire meat case at our neighborhood Tesco. (And probably far fresher.) I saw produce that was utterly new to me -- a fist-sized variety of passionfruit, and some Colombian fruit that looked a bit like a yellow hedgehog. Prices on such items were, of course, insane. Does anyone really buy this stuff?

As a special treat, Pam and I ate at the Harrod's seafood counter. I ordered a salmon fish cake, but the waitress instead brought me a £24 plate of fish & chips. (That's $39 -- a crazy price, no matter how good the fish is!) Fortunately, because she screwed up my order, the waitress gave me a glass of wine for free -- and then Pam picked up the tab, which was really great of her. So I have no reason to complain. (The fish & chips were terrific, too.)

Now, I'm just going to relax and read and listen to the rain!
Posted by Steve Reed at 9:50 AM

i have fond memories of visiting harrod's on a visit to london - opulent is the operative word!

i made the mistake of whipping out my camera to take some photos and was immediately reprimanded! ha ha.

sometimes it's nice to have a gray, rainy day to curl into.....

I'm glad you had fun with your friend - but my goodness do you deserve to relax today!

I wish I'd been more ambitious during my few hours in London years ago, but I was mainly just exhausted & trying to figure out what to do with luggage the whole time. It was all very complicated! I did eat at a Pizza Hut near Victoria station... (I was on my way home from Zambia, so I couldn't resist. I should have - ha!).

Sometimes I wish for a bit more gray and rainy (just a bit, though!) as the endless sunshine in Los Angeles prevents the surrender to a day inside -- I hope yours is a good one!