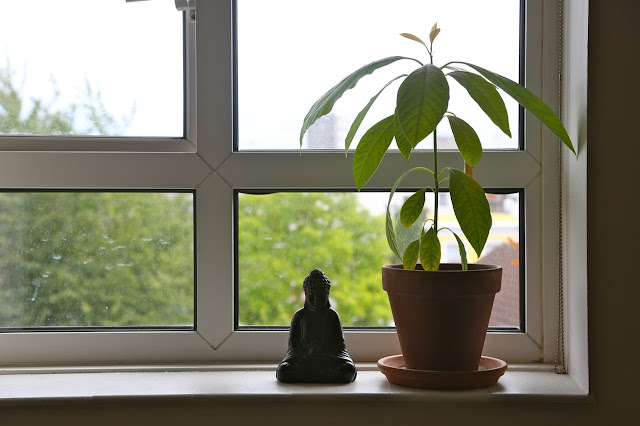 It's time for a critter update!

First of all, our avocado plant -- granted, not really a critter. It's grown quite a bit since last September, despite sunburned leaves a few months ago. I pinched the top bud a while back to get it to branch, but so far, it has steadfastly refused to do so. I'm just going to let it grow however it wants to! Fulfill your inner nature, little avocado seed. 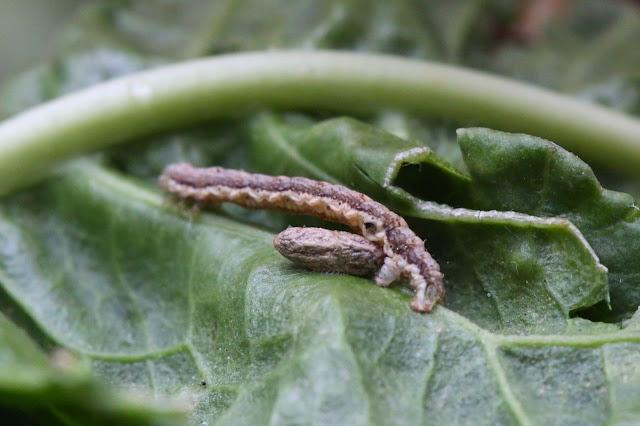 I mentioned some time ago that we had more caterpillars, presumably from Cabbage White butterflies, on our horseradish plant. But after eating voraciously, the caterpillars suddenly vanished. There was no evidence that they had pupated. I was mystified, so I examined the plant carefully yesterday, and found this last lone caterpillar.

As you can see, he doesn't look right. That's because he's been parasitized by another insect, perhaps a braconid wasp. That's the big ol' wasp egg growing out of the caterpillar. He's not long for this world. My guess is that's what happened to his compatriots too. 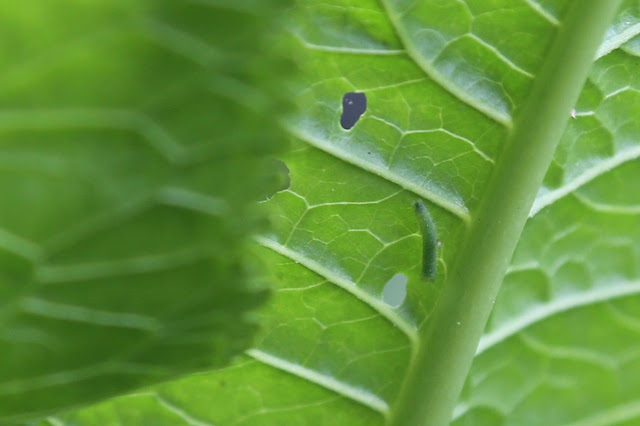 But we have a new crop of tiny, tiny green caterpillars munching minuscule holes in the fresh, new horseradish leaves. So the cycle of life goes on -- that plant is such a caterpillar magnet. 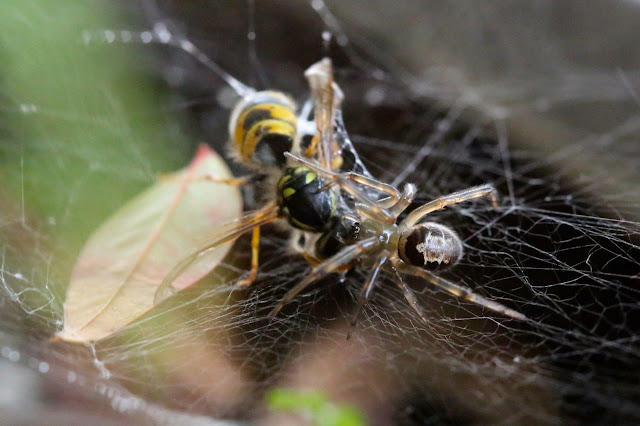 As I was photographing the caterpillars, a bee blundered noisily into a spider web hidden in one of our flowerpots. I didn't even know we had a spider, so I was happy to find her, though I don't think she's the same variety as Pat. The spider bit the bee, then vanished until the bee stopped struggling, when she reemerged and feasted.

I'm telling you, it's a rough world out there on our balcony!
Posted by Steve Reed at 6:34 AM

I love it! A tiny entire bio-world, a jungle, a spider-eat-bee universe! Right there on your balcony. Your avocado plant looks lovely.

Oh poor caterpillar. How on earth did you know that was a wasp egg protruding from it? Ugh.

Your own little balcony insect zoo!

How cool to have all of that going on right under your nose!

It is indeed a miniature jungle out there! I am very taken with that first photo, the clean lines, the little Buddha sheltered under the leaves, the cross of the window frame, the perfect off center composition, the light, it all just really spoke to me.

wait that's not Buddha! Who is it?

I love that first picture too! Is that some Hindu god? Hmm...

Great pics. Nature has her way even on balconies.

Animal Planet on the balcony- the drama and trials unending! Everyone must eat I suppose or suck, whatever those critters do. I prefer caterpillars to wasps, any day.

It's just Wild Kingdom over here on "Shadows and Light!" My favorite photo is of the avocado plant and the Buddha. I mean, that's spectacular. I would love a print of it, if possible!

Ms Moon: Maybe I should pitch a show to Animal Planet?!

Lynne: Yeah, I feel bad about the caterpillars, but I guess the wasps need to live too. And we do have too many caterpillars. I'd seen a photo somewhere of this phenomenon, so when I saw it I knew what it was right away.

Angella: You were right, it is a Buddha. Buddha was enlightened while sitting under a bodhi tree, which is a kind of banyan -- so the avocado is becoming our own little windowsill bodhi tree!

Bug: Well, Buddha was born a Hindu, so you're not far off!

Ellen: Indeed she does. It's incredible to think all this is going on at any time, regardless of whether I notice or not!

Linda Sue: You've got to kill to live. That's just the way it goes.