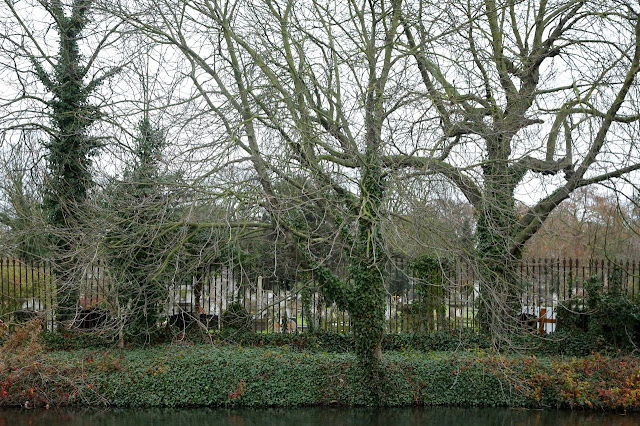 Olga and I walked along the canal yesterday. So much has changed out that way in the past few months. For one thing, the trees have all lost their leaves and the headstones of Kensal Green Cemetery are now visible across the water. Also, several large wooded areas on the side of the canal where we walk have been cleared, apparently for a large rail transit project. (The train tracks to Paddington run near the towpath, down a slope on the other side of a brick wall.)

Olga did not mind any of these transformations. She remained focused on geese and sticks. 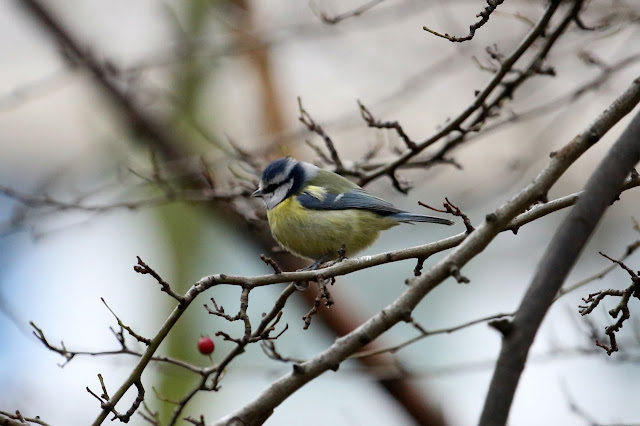 I continued my birdwatching, but all I saw were robins and some blue tits like this one. It's a great time of year to photograph birds, with the trees bare -- but I think many of the bird species have gone south for the winter.

We had a busy social whirl of a weekend. As I mentioned, we had friends in for a movie on Friday, and Saturday night we went to a party thrown by a work colleague in Charlton, which is diagonally across the city from where we live. Quite a schlep! And finally, last night we had our neighbors Chris and Linda over for drinks and nibblies, so we could see them before Christmas. In between we Skyped with my dad and stepmother, ordered some clothes online and I tried to do some housekeeping.

Dave, meanwhile, has come down with something and had a 100-degree fever last night. I persuaded him to call in sick today. My mom always says when you get sick you have to just stop -- and moms know about these things.
Posted by Steve Reed at 7:23 AM

Moms DO know about these things and your advice to Dave was correct. I am glad he is staying in. This time of year can make us all sick.
Your blue tit made me so very happy.

I love seeing the different birds that you have. I wish I had blue tits in my yard. Looks like a goldfinch crossed with a chickadee. So cute!

I am still jealous of your owls ...