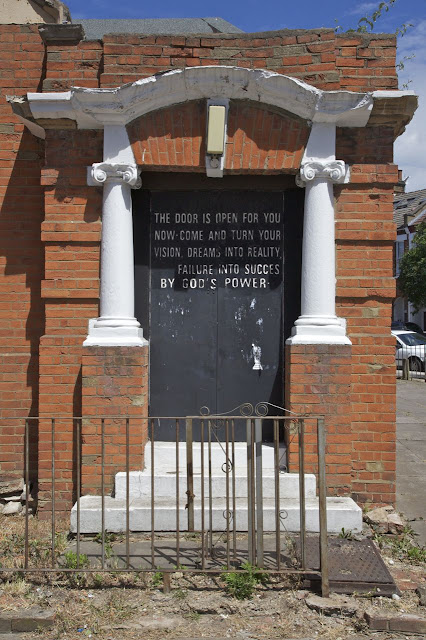 In the novel "Bleeding London" by Geoff Nicholson -- the book that inspired the recent Royal Photographic Society photo project that I've been writing about ad nauseam -- the character Stuart London sets out to walk all the streets in the city.

Here's the passage in the book that launches his walking project:

“He knew he had to begin somewhere and he knew that in one sense, any place was as good as another, but he scanned the index of his A-Z looking for a street name that sounded appropriate. His eyes fell on a line that read North Pole Road. Next day he went there and started his walk.”

The RPS sponsored an outing yesterday morning recreating Stuart's First Walk, and I tagged along, being so familiar with that area. North Pole Road is not far from Ladbroke Grove and Notting Hill, and I used to walk Olga along that street whenever I took her to Wormwood Scrubs park. It's the site of this cafe (the wonderful sign has since been replaced) and this controversial Tesco.

It was a fun outing, and our guide, Jen Pedler, read Nicholson's descriptions of the route in the book as we walked. Many of the shops and other landmarks are still around. Even better, Nicholson himself tagged along with us. He explained that although he familiarized himself with the parts of London that he wrote about, he was not his character, and he didn't necessarily do all that walking. 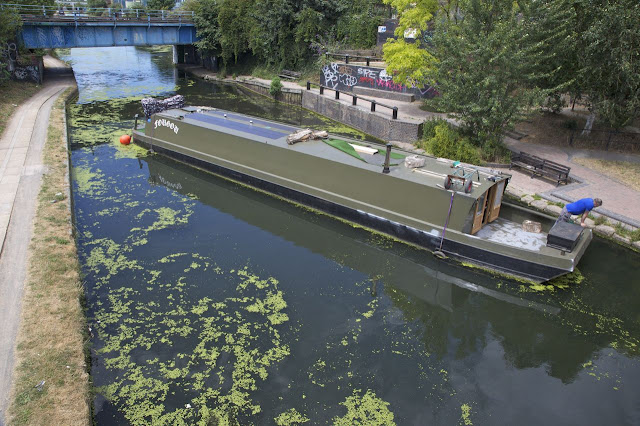 We crossed the Grand Union Canal, where this guy seemed to be trying to turn around his overlarge boat. 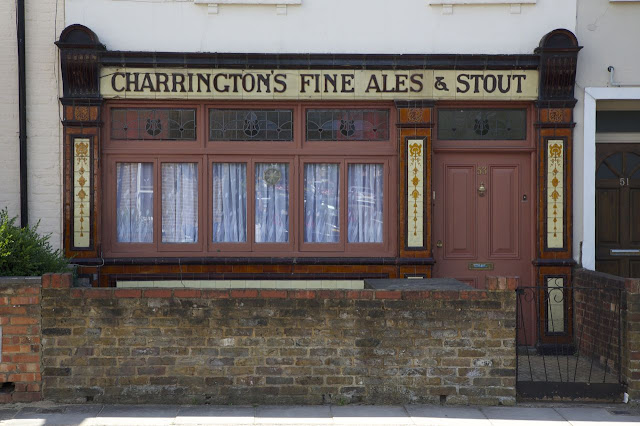 And we walked through a little neighborhood off Scrubs Lane where this former pub -- in the middle of the block, an unusual location -- had been turned into a house. (Or so one of the neighbors told us.) 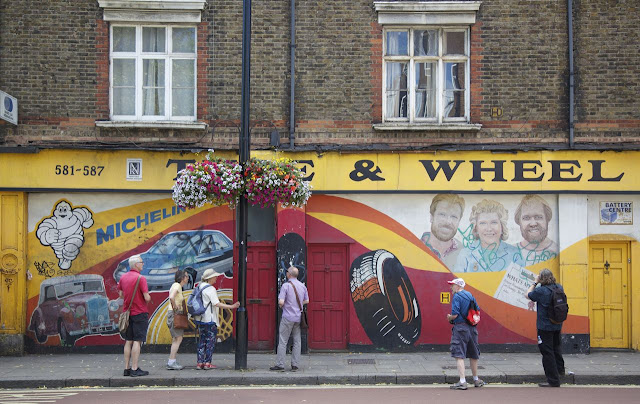 We were very excited when we found a Harrow Road tire shop that Nicholson mentioned in the book, with a mural of the staff on the wall. (The mural actually seems to commemorate the woman, who apparently stumped the panel on the TV show "What's My Line?" back in 1985. I assume she's somehow connected with the shop?) Anyway, that's Nicholson taking a picture of the mural, far right.

Finally, we wound our way through Kensal Green Cemetery and past Trellick Tower, before heading back to Ladbroke Grove. We stopped for a few pints at a local pub, and then I boarded a bus for home.

It was a fun day. Pedler is offering these guided walks to others who are interested. More information is available here.

Meanwhile, I really have to read Nicholson's book at some point!

(Top photo: A church door on Harrow Road.)
Posted by Steve Reed at 7:47 AM