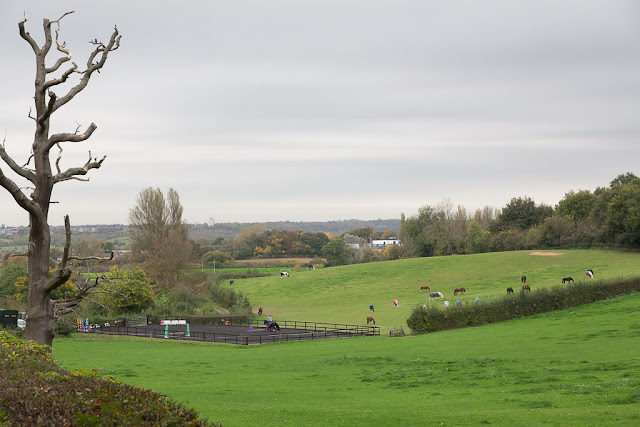 I walked my sixth segment of the LOOP yesterday -- which means I've done a quarter of the entire 150-mile path! Woo hoo! If I keep up my current pace I'll be finished in April or so.

Of course, who knows what winter and the holidays will bring. Not ideal walking circumstances. I may get slower.

Yesterday's walk took me ten miles through rolling hills and woodlands, past lots of horse farms and cow pastures. At one point I found myself walking through a pasture, right next to wary cows, which is never my favorite situation. But they didn't bother me -- just stared and stared. 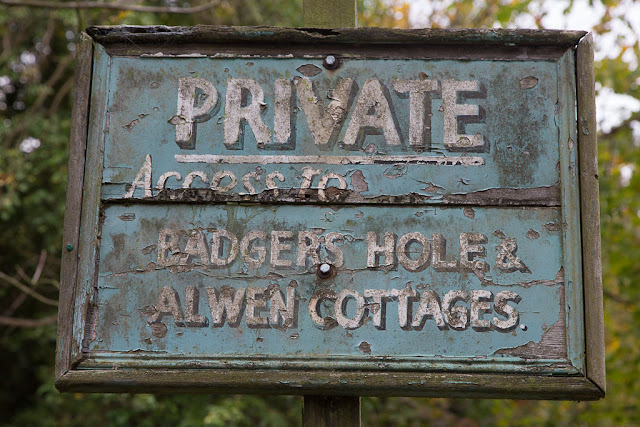 The walk began near the 700-year-old Domesday oaks of West Wickham Common, which have been so pollarded they're barely visible beneath a mound of underbrush. I walked through neighborhoods and woodlands toward the Addington Hills, where there was said to be a hilltop terrace looking out over the city. 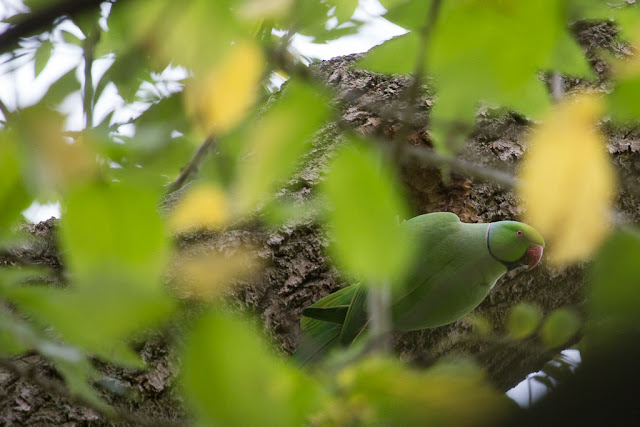 Along the way I encountered some parakeets in the trees... 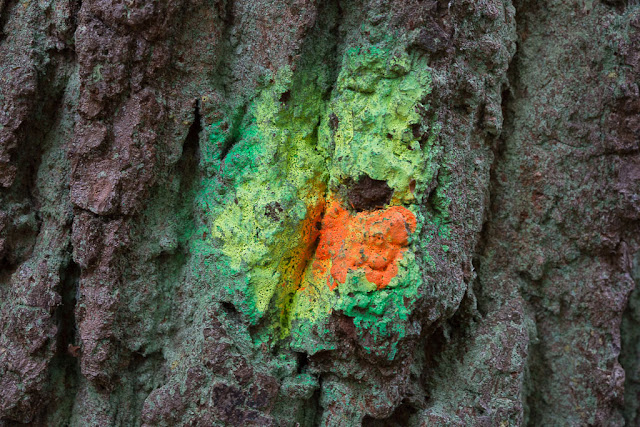 ...and a rather parakeet-colored tree marking signifying something or other. 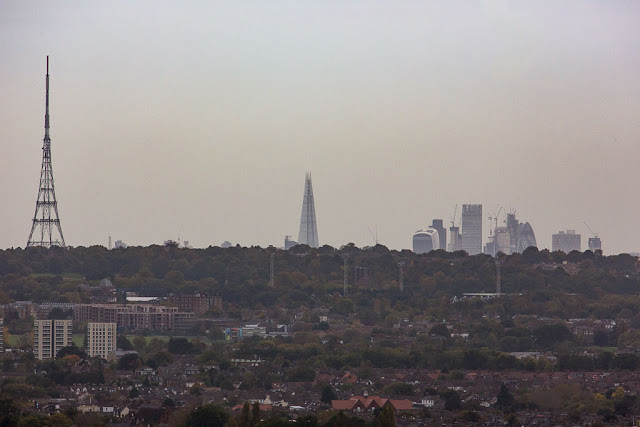 Finally, I reached the terrace, and indeed the view was pretty impressive, although downtown was partly hidden by the highlands just east of Crystal Palace. You can see the Crystal Palace broadcasting tower on the left, the top of The Shard in the center, and the tops of the City buildings on the right. (I cleaned this photo up a bit -- the actual view was much hazier than this.) 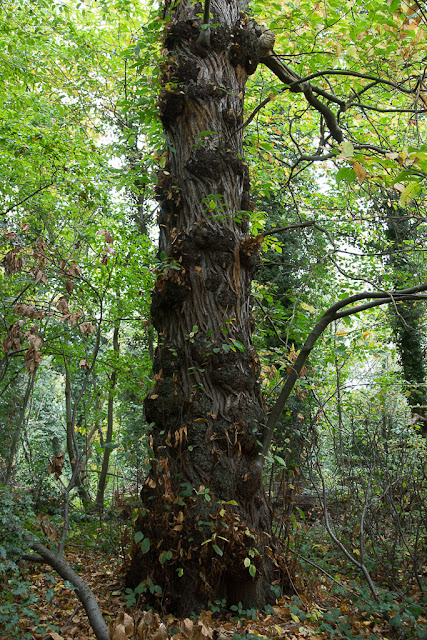 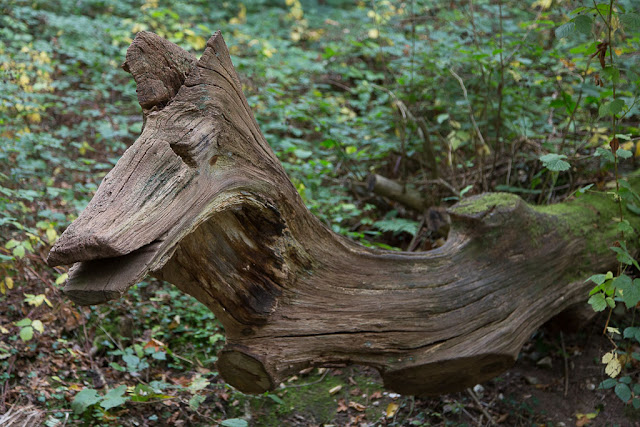 ...and this certainly sculpted-by-human-hands horse (dog? dragon?) in Puplet Wood. Some of the places I passed had great British-sounding names, like Threehalfpenny Wood, Baker Boy Lane and Mossyhill Shaw. 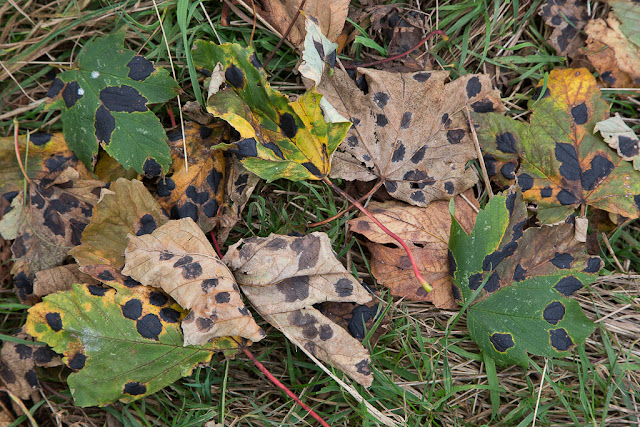 Mossyhill Shaw is supposed to be a great place to see butterflies, but apparently not at this time of year. I did, however, spot some bizarrely Dalmatian-like leaves lying on the ground. I have no idea what causes this -- some kind of tree disease, I suppose? Maybe like Black Spot on roses.

This segment ended at a bus stop near some horse farms, and you'd think -- being seemingly out in the middle of nowhere -- it would be devoid of people. But no! The neighborhood school let out just as I was ending my trek, and I rode a public bus with approximately 500 uniformed teenagers until I got to the train station at Sanderstead, Croydon, where I caught the train home. This is where my experience working in a school came in handy -- the kids didn't faze me at all!
Posted by Steve Reed at 6:38 AM

That's maple tar spot disease. It's a fungal infection and has been common here the last few years. I was going to post about it! It has become a problem here with Norway maple trees which are not native to our region; they're a European species (as opposed to the sugar maple which is native to Canada).

Love those sculptured trees, both the natural and the man-made.

Very rural in the first photo, or maybe very horsey...
And in the photo of the distant London skyline what is the structure that looks like a skinny Eiffel Tower?

This LOOP walking project is very admirable Steve. Well done on the miles you have covered so far. I believe you are the kind of stalwart chap who will make it to the end of the London Outer Orbital Path. You will then be able to launch a LOOP photo exhibition or at least make a great LOOP photobook.

TEN miles? My Lord, Steve! How long does this take you? You're amazing!
I really love the "Access to Badger Hole" sign. Any chance those places are still open? Because they sound like a place I'd love to go.
What a beautiful project and I agree with YP. You will have some very nice shots when you're done.

WOW. That parakeet in the London woods is just the right amount of Lewis Carroll to entice me back for more of this LOOP. Your photos make it such a wonderful vicarious adventure for me, sitting here on Long Island, where there is nary a badger hole signpost nor a cow in sight. I also envy you your ten mile walk, and the heavenly V&T & sense of accomplishment that must have come after, well deserved and well done.

Are you writing any thing yet?

quite ambitious. sort of like walking the Appalachian Trail I guess. nice that you can bus and train to starting and stopping points. love the shot of the knobby tree.

Kids sense very quickly when an adult is comfortable with them.

Ten miles! That's quite a distance. I'm happy when I manage a four-mile loop. You do get to see some very cool stuff out there.

Once again you've made me think of the Midsomer Murders TV show, especially that sign with the name Badgers Hole. One of the fictional towns used in that show is Badgers Drift. That first photo is such a pretty view and I actually see a face on that sculpted tree. And, your ride with the school kids made think of the time I took the train (or I should say "trains") to Wales. There were lots of school kids who got on and off the trains at various places. I remember thinking "wow, these kids have to take a train to school every day".

Having spent a lifetime in radio and television, I was curious about that broadcasting tower so I Googled it. It's quite a sight on the horizon. As was a parakeet in a London wooded area. I would not have expected that. Great tour, Steve.

So wonderful to open your blog (and I'm so behind with blog reading!) to such a beautiful photo of fresh green! As you know, at this time of year southern California has little to no REAL green -- that water-soaked color that you have plenty of, still. In any case, I loved taking this walk with you and so appreciate the sights.

Jenny O: Thanks for clearing that up! (Not the disease itself, but my ignorance of it. :) ) I'm happy to read that apparently it doesn't kill the tree -- it just looks weird.

Alphie: That "skinny Eiffel Tower" is the Crystal Palace broadcasting tower. It's a famous landmark in South London.

YP: You know, I think there may be a photobook in this. Stay tuned!

Ms Moon: Once I get going, I can keep going pretty far. It usually takes me three or four hours, and I'm usually in pain by the time the walk ends! Weirdly, it's always my back that hurts worse than my feet. I'd say ten miles is around my maximum. I think Badgers Hole and Alwen Cottages are still there -- there were definitely houses down that private road.

Vivien: It's too bad NYC doesn't have this kind of trail -- but the USA doesn't have the tradition of public pathways that the UK does. They even cut across private land, but they're kept open by law. Some of them are hundreds of years old.

Ellen: Except it's not nearly as up-and-down as the Appalachian Trail. That's mountaineering!

Red: It's true. I'm not sure I was comfortable, exactly, but at least I wasn't intimidated.

Robin: It's amazing what's around us when we look. You capture this very well in your photos of the birds and insects in Northern California.

Sharon: It was funny to me that all those kids took a public bus. I guess there's no need for a special school bus, though the bus driver was quite exasperated with them as we were all trying to board. "I can't let the whole bloody school on!" he said.

Catalyst: I see those parakeets on Hampstead Heath sometimes, and we've even had them in our garden on the bird feeders. They're an exotic species, introduced through the pet trade, but I always think they're pretty.

John: Thanks! I could also see Canary Wharf and the area up around Wembley Stadium. Apparently on a clear day, from that viewing platform, it's possible to see Windsor Castle!

Elizabeth: England is nothing if not green!

I love these LOOP posts. As you know from my blog, cows do like to stare :)