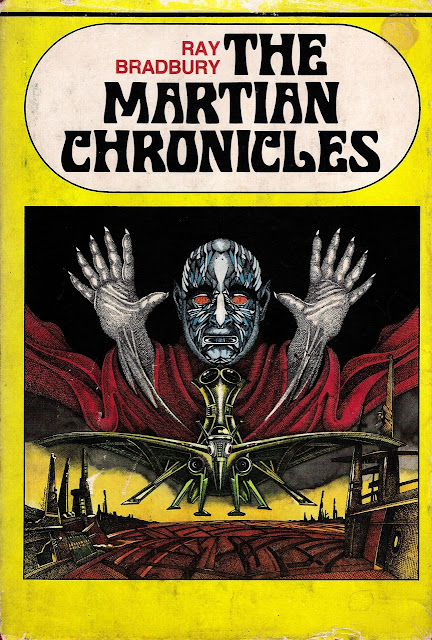 Ever since middle school, I've loved Ray Bradbury's book "The Martian Chronicles." It's a landmark collection of sci-fi short stories about man's colonization of the Red Planet. When I was in the 7th grade, my English teacher played our class a recording of Leonard Nimoy reading what became my favorite of the stories, "There Will Come Soft Rains," and I was hooked.

That's my copy above, a somewhat bedraggled hardback I bought in a used book store in Key West in 1990 or so. It's not a dated edition, but I'm guessing it's from the '60s or early '70s, with that tawdry cover.

As originally published in 1950, the book's action took place in the years between 1999 and 2026. In early 2000, I went to Barnes & Noble for a new copy to replace the one above. But I was annoyed to find that the newer edition, from 1997, shifted all the dates in the book ahead by 31 years. Thus, man's arrival on Mars was said to occur in 2030. That edition also eliminated one of the stories. (Wikipedia, which obviously wasn't available at the time, now details those revisions more fully.)

I felt so betrayed by the changes that I decided against replacing my original. At the time, I was writing for a newspaper in Sarasota, Fla., and I penned a column about the episode: 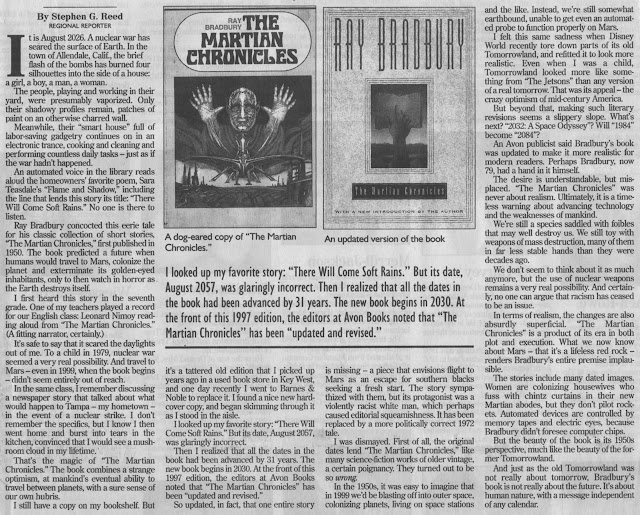 Basically, I argued that changing the dates violated the spirit of the book. There was poignancy in the fact that not only hadn't we made it to Mars by 1999, we'd even ceased manned flights to the moon. The book's messages of warning to humanity -- about the still-very-real danger that we could all but exterminate ourselves -- were still germane, even on the old timetable.

My column ran not only in our local paper but was sent out to other papers owned by the New York Times Company. A few days later, to my surprise, I got a message from an editor at a sister paper, who happened to know Bradbury. The editor told me that he'd sent Bradbury my column, and Bradbury, who was 79 at the time, wanted to talk to me. Gulp! 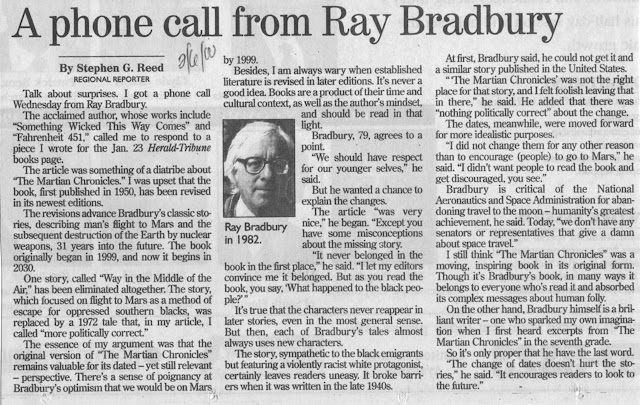 Several days later, Bradbury called me at my desk. He was very congenial but quite frank in his explanation of why the stories had been updated in the book's newer edition. He wanted people to continue looking toward the future, he said, rather than become discouraged that we hadn't progressed as quickly as he'd first envisioned.

He also said he'd eliminated the missing story because he felt it didn't really fit with the book. It was a story in which race played a significant element, and I suspected he removed it because its racial language and depictions were dated. He said there was "nothing politically correct" about the change. I remain skeptical even now, but who am I to say?

In any case, this episode was one of the most exciting of my journalism career. It's odd that although I called the publisher when I wrote the first piece to get an explanation for the revisions, I never thought to call Bradbury, a writer I idolized. He seemed as remote and untouchable as if he were on Mars himself, rather than simply living in L.A.

I was happy to talk to him, even belatedly -- one of my literary heroes! I still wish he and his editors had left the book alone, though.
Posted by Steve Reed at 7:08 AM

Bradbury may have done what was suggested by an agent or editor. I enjoyed his books as a young person.

How splendid that you conversed with Ray Bradbury. You must have hit a tender spot with your initial article. However, my main point of interest in this blogpost is the "G" in Stephen G Reed. What on earth does that "G" stand for? My money is on Gandalf, Gawain or Godfrey. Other possibilities are Giovanni, Grimmwolf or Gerhardt.

Wow. Very exciting. I would have assumed Bradbury had nothing to do with the date changes and am disappointed to learn he wanted them.

I had no idea you'd ever spoken to Bradbury. I, too, love him. What an amazing experience to have had! "The Martian Chronicles" are some of my favorite stories ever but frankly, I wasn't aware of the changes. My attitude about it all is that he was the author and could do anything he wanted. But it's good to know that HE wanted to make the changes and wasn't forced into them by editors.

what a hoot. Bradbury was one of my early favorites too. this reminds me of the time that I made a valentine for charlie Brown of Peanuts and sent it to some address to Charles Shultz (it was a very long time ago, I was probably about 11 or 12). He eventually received it and sent me a very nice thank you note.

I love that you talked with Ray Bradbury! I find it interesting that he updated the book and changed the dates. I think, had I read the edited version years after I had read the original, I would have felt the same way you did. I'm glad you wrote the column about it. It's a shame we didn't make it to Mars by 1999, but that's no reason to change fictional history!

Awesome! How exciting for you. I hope someday you have your blog posts printed in a hard cover book (or books). You have your own story here that your family would cherish. You have a wonderful day, hugs, Edna B.

Here I am, another Bradbury fan. I read The Martian Chonicles when I was still in school and I loved that book. And, I loved Fahrenheit 451 too. I went to see the original movie 3 times when it was playing. (Of course having a bit of crush on Oskar Werner played a role too.) It's so exciting that you actually got to talk to him. While reading your post, I was think that is was awful that the book was updated like that and hearing that it was actually Bradbury that wanted it updated sort of relieves those feelings. You've made me want to read the book again.

I just don't know about changing published works. It feels like once they're out there, they're done. The book is finished and should stand as it is. Will they be updating the dates every thirty or so years when we still have not reached Mars or any place else?

Agree with Allison and your initial reaction to the altering of his book. Should not have been done. If he wanted to update he might have written an updated OTHER tale. Sci fi is flexible. But what a thrill to be recognized and spoken with on the phone by the man! I would have had to wear Depends for a call like that.

No matter how jaded we journalists get it is always a thrill to talk with a legend. I had that experience back in the 1970's when I wanted to get a comment from John Wayne about a story he figured in. I talked to a rancher who worked for him in Arizona and he gave me his California telephone number. I called it, expecting to hit a wall of secretaries and public relations people and was stunned when the actor himself answered my call. I eventually interviewed him for television and he couldn't have been nicer.

I haven't read Ray Bradbury for a long time. It's time I picked up one of his books again.

I agree with you - I would prefer that a previously published work stand as written, in subsequent editions. If it's updated I would like it to state that prominently, either on the cover (preferable) or in a preface, so I notice it before reading the book. Your original article is a bit of a time capsule as well. And here we are, all these years after your classroom encounter with the ideas surrounding nuclear weapons, again with the threat of dangerous fingers on those buttons. Gah.

E: Maybe, but I still think it was the wrong decision.

YP: I think Bradbury probably knew the decision to update a classic collection of stories could be questioned, and he was prepared to defend it. The G stands for Gager (pronounced Gayjer), which is my mom's maiden name. It's an old English surname that means "the king's measurers."

Mitchell: Well, since he was alive at the time, it makes sense that he'd have had a hand in them. But yeah, I don't entirely agree with his reasoning.

Ms Moon: Well, who knows -- the editors may have talked him into it. You wouldn't be aware of the changes unless you bought a new copy of the book, and knew the old version intimately!

Ellen: That's awesome! Do you still have your Schulz thank-you note? I wrote Charles Schulz too, when he was on his deathbed. I sent HIM a thank-you note.

Robin: Exactly. I think once a book is published, it's done. Future revisions are a bad idea.

Edna: Well, I suppose the story is always available here in electronic form! I still haven't looked into the blog book. My blog is so big I can't imagine how it could all be published on paper.

Sharon: "Fahrenheit 451" has a much stronger following than any of Bradbury's other books. I always thought it was the least interesting, but it's probably the most realistic, and kids still embrace the message.

Linda Sue: I was pretty shocked that he cared enough about my opinion (and our readers' opinions) that he wanted to talk to little ol' me!

Catalyst: That WOULD have been amazing. Stars are people too, I suppose!

Red: You should! He was a really good writer, and his writing holds up. (Without needless updating!)

Jenny-O: I suppose the threat never goes away, though it looks at this point like we're more likely to kill ourselves slowly through environmental degradation.