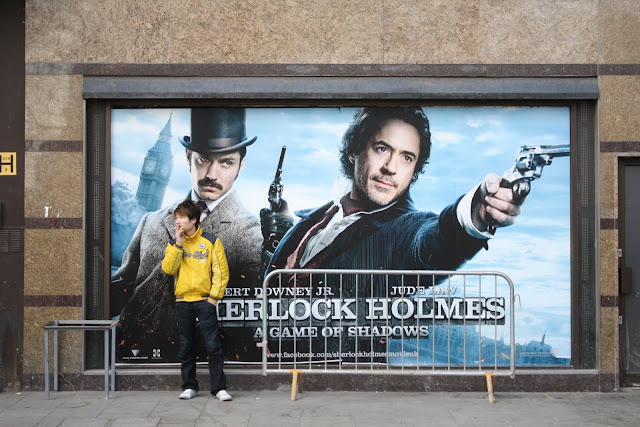 Yesterday we shot portraits in photo class. First we shot each other, which was no big deal. Then we had to go out and shoot strangers. Ugh!

My modus operandi in photogaphy is not interacting with my subjects. I'm not saying this is right or wrong. I just really don't want to talk to people I don't know. As my mother would say about herself, "I'm too odd and peculiar for that!"

Even as a reporter, my nightmare assignment was man-on-the-street interviews. I just hated the idea of interrupting someone who's going about their own business to ask them questions about politics or whatever.

Option b was so far-out I considered it off the table. Option c was clearly my most likely choice, but I wanted to push my boundaries a little. So I found some poor newsagent who wasn't busy and photographed him in his shop. 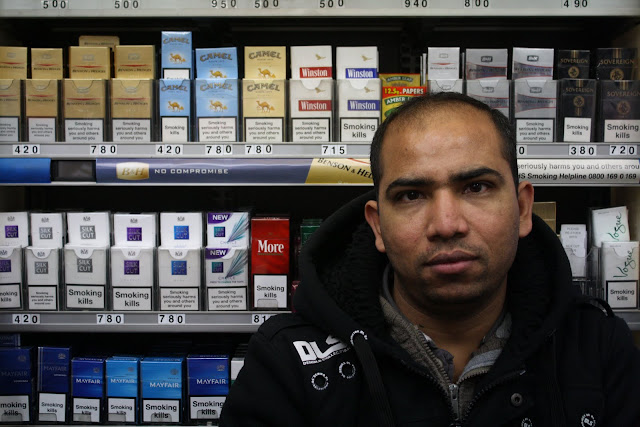 I included all the cigarette packs behind him to give a sense of his workplace, but I wouldn't say it's a killer portrait. The light wasn't very remarkable. He was friendly but he had a lot of questions about who I was, what nationality I was, and where I lived -- and I can't blame him, since I'm sure it's not every day some strange middle-aged guy comes into his store and wants to take his picture.

I then wandered around and took lots of photos that are more representative of my style -- less in-your-face, like the top photo.

And with that, the first week of photography class comes to an end. Next week is going to be far more challenging -- it's street photography and photojournalism, which will mean more storytelling and more interaction. Ugh!
Posted by Steve Reed at 8:17 AM

It's so exciting that you're pushing yourself out of your comfort zone!

I think it's an incredible portrait! Wow!

I agree with you. I like your style of photography much better.

Btw, I could have done option b) easy. Go to a park and get some shots of some b-ball players. How about some skateboarders. Or some kids on the playground. They LOVE jumping off the equipment. Although a man taking pics of kids at a park might freak some people out. :p

These are looking so bloody pro!!! Excellent shots! Love the news man.

I have a camera with a flip out flexible screen so I can take ninja shots - candid and sneaky.

I'm JUST like you! I really hate to even be caught with my camera, much less have to talk to someone about what I'm up to. But you did a fine job with the assignment.

I like the picture. It says a lot. I am very skittish about photographing people when they know I'm taking their picture.