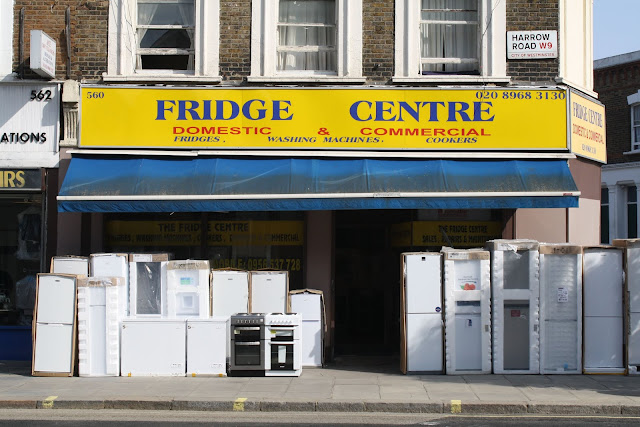 Wow, was yesterday ever busy!

My pals Jim and Karla Murray, who wrote this amazing book among others, passed through London on their way to continental Europe. They were only here for a few hours, but I'd agreed to hold some bags for them while they're on their trip, so they stopped in early yesterday morning. We sat and chatted for a while about their arduous, stormy ocean crossing -- they came by boat! -- and then we went for a quick photography walk. I took them up toward Trellick Tower, where I knew there would be some good graffiti. (Jim and Karla are graffiti enthusiasts as well, and have published several books of graffiti photos.)

We walked up into Queen's Park, where we photographed some interesting storefronts like the one above. Then we hit the jackpot in the courtyard at Trellick, where numerous artists were taking advantage of the bright sunny day to paint. (Apparently painting at Trellick, while not exactly legal, is tolerated. That's what one artist told us, anyway. We certainly didn't see any cops around.) We watched them for a while and then made our way back home.

Jim and Karla had to catch a train, so we joined Dave at a pub for lunch and then they went on their way. I got some valuable information from them about submitting my own work to a publisher, so hopefully that will help move my own photography forward.

Then Dave and I pulled together a dinner party last night for lapsed bloggers Liz and Sally, their respective husbands and Sally's daughter. Dave made a terrific leg of British lamb and some excellent sides, and though we were a bit worried we wouldn't have enough food, we seem to have judged the quantities perfectly. (And we had plenty of wine -- always the secret to a successful dinner party.) Whew!
Posted by Steve Reed at 8:07 AM

Steve, it really is a joy to read your blog everyday. I know I can always look forward to a post from you. Then I can comment. :)

When I lived in Mia, I loved looking around at all the graffiti art. They don't have much of it here, if any, where I live now.

I, too, had a dinner party last night. Love being on a wavelength with you!

What a great time! Nice of you to hold theri bags for them- lockers cost a fortune- about as much as a hotel room! Trellick is indeed horrifying- Looks like it belongs in Oklahoma.
Everytime I leave your blog I feel so guilty about your KOI! I think that I should stay a bit longer and feed them until they are no longer hungry- no matter how much I feed them they still are eager for more.
LOVE

I seem to be on my way to becoming a lapsed Blogger. Can I come to dinner? :)

Ms. M: One of Jim and Karla's books, which I linked to, is about Miami graffiti. It's a great graffiti town!

Reya: We are ALWAYS on a wavelength, aren't we?!

Linda Sue: It's so funny you say that about the koi. I always find myself feeding them too. They are so realistic it's hard to remember they're just pixels!

Barbara: Don't lapse! But yes, you can always come to dinner. :)

Ooo, I will have to go take a peek.