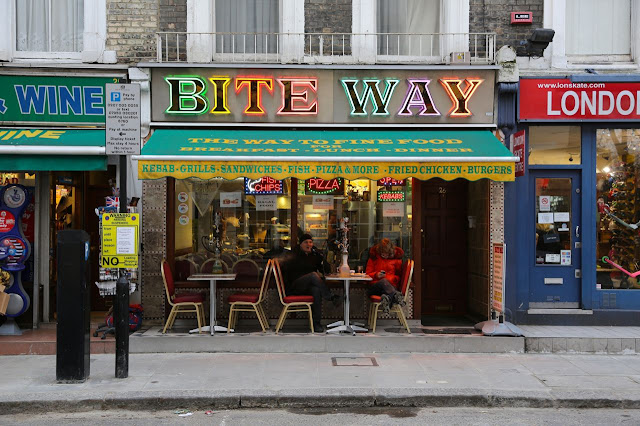 I love this storefront. It usually has a phalanx of cars parked out front, making photography impossible. I got lucky on Saturday!

Busy day yesterday. I took David to the airport, in order to help him with his baggage. He had a big, heavy suitcase and two overstuffed carry-ons, plus a few odds and ends like a rolled-up poster. He could have managed, I'm sure, but I wanted to help out and also make sure he made the tube transfers without a problem.

If there's one thing I've learned while traveling, it's to pack light -- as some of you know, I'm a little fanatical about it. I think it's a good rule of thumb for life in general as well! The less stuff, the better!

Dave and I went to see "Argo" yesterday afternoon. It was very suspenseful and we liked it, though the ending seemed a bit too neat for my taste. I don't remember that episode of American history at all. I remember the Iranian Hostage Crisis, obviously, but I don't remember that a handful escaped -- and apparently they did make news at the time.

There are still several other movies I want to catch -- "The Master" and "Silver Linings Playbook" among them. Then, last night, we watched "Southland," which I recently discovered showing on TV here (did I write about this already?) and we downloaded Season 1 of "Homeland." I'm trying to keep up with my pop culture!
Posted by Steve Reed at 6:43 AM