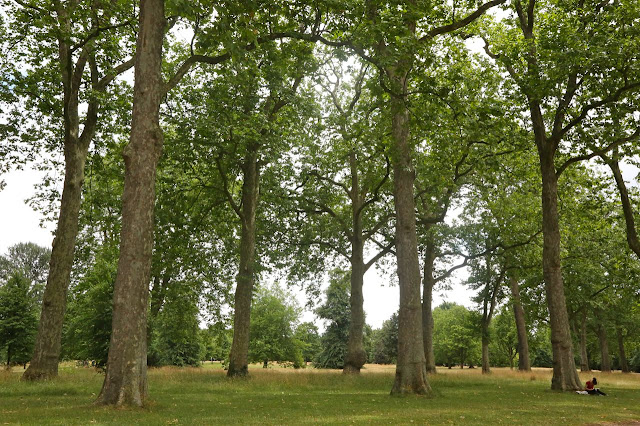 I took Olga to Kensington Gardens yesterday, where we had a long walk and a romp with her Kong toy (or what's left of it -- she's gnawed it down to a mere stub of its former self). The grass that a month ago was long, lush and green has turned into brown straw. That doesn't stop Olga from rolling around in it joyously.

Last night, Dave and I went to see "Sweet Bird of Youth" at The Old Vic, starring Kim Cattrall of "Sex and the City" fame. It's a suitably melodramatic Tennessee Williams play, filled with unsavory Southern caricatures -- a slavering redneck political boss; a drifting, wraith-like damaged girl; vengeful good ol' boys. It's a good production about the relentless forward march of time, and the need to move forward with it, rather than get consumed by the past. Both Cattrall and her leading man, Seth Numrich, did a great job. We especially liked the set, a weathered, columned Tara-like facade with drifting curtains.

I woke up depressed this morning, after a night of strange, tumbled dreams about my family and friends in the states. (I blame Tennessee Williams!) Nothing very specific or alarming happened in the dreams; I just feel like I'm missing so many people, and maybe I'm not keeping up with everyone like I should be. I've become so lazy and passive about staying in touch. I browse Facebook and "like" other people's posts, and occasionally post things of my own -- mostly dog pictures, lately -- which I assume (probably wrongly) that all my friends see. But it's been ages since I've written a substantive e-mail to anyone, much less a letter. Maybe I need to make more of an effort. I don't want to be consumed by the past, or relive it, but at the same time I want to maintain continuity in my life!

(Photo: A woman reads in a grove of plane trees in Kensington Gardens, yesterday.)
Posted by Steve Reed at 6:55 AM

It's so hard to move away from somewhere you've lived a long time and the friendships you built over the years. I felt like that when we moved from CO to NJ. It's not easy to keep long distance relationships going. It was interesting to see who wanted to keep in touch with us and who couldn't put forth the effort. When we go back to the cabin each year we always make an effort to get together with everybody and it's always great to see them. Still, we aren't as close anymore since we are not heavily involved in their daily lives.

It is hard to keep in touch these days but also deceptively easier. I periodically Facebook message friends and we have intermittent bursts of conversation there. You may be keeping in touch ok but are just missing face to face contact with some of your people. There are days like this. xo

Some things just ARE worth holding on to.
Write a real letter!

Nothing says summer like a Tennessee Williams play. I'd love to see Sweet Bird at the Old Vic as the ghost of Laurence Olivier sweeps past keeping connections to what once was alive.

I find that distance from old friends is the best thing- we still connect as though no time has gone by, as though distance did not matter but I find that it seems to improve and clarify relationships. Never "homesick" , though it is interesting how I keep coming back to the same place on the planet, I think it mostly has to do with ease and comfort, and the fact that the PNW is really beautiful- no poisonous insects or snakes! That is worth something.Your friends will search you out no matter where you end up, you know. AND I would look at photos of Olga all day long! She is the queen pooch !

I've been feeling extra lazy lately - I think you've inspired me to put forth some effort into getting together with some friends I haven't seen in a while :)

Well, I know I mentioned writing when you were here, but if it's going to cause turmoil...

I'm all for writing and receiving regular snail mail letters, and I happen to also like talking on the phone (which I know a lot of people despise). I do find that my friends, spread out literally all over the country and some in England and France are still my friends when we finally connect. Those connections generally just pick up where they left off, so that comforts me when I feel like I'm "losing touch." Thank you, though, for entertaining and educating us through your photography and mini slices of life in England. While I don't really "know" you, I feel connected in some odd way.

Lynne: Distance always makes things difficult, though I have found with some friends that we readily slip back into our friendship patterns when we see each other again.

Angella: Facebook is amazing, I concede that! I do feel like I'm more in touch as a result of Facebook. But it's also almost a disincentive, you know?

Ms Moon: I should!

Gary: Yes, the place is permeated with the ghost of Olivier. Several people sitting behind us were talking about him at intermission!

Linda Sue: I suppose there can be benefits to distance, that's true. I'm not "homesick" per se -- I miss people more than any places. (Though I do miss New York.)

E: Don't worry, your mention of writing did nothing to trigger this!

Elizabeth: Thanks, and yes, I feel connected to you and the rest of my "blog family"! Many friendships do pick up again promptly, which is comforting. Maybe I need to visit some more people?