A Couch, via Google Image Search 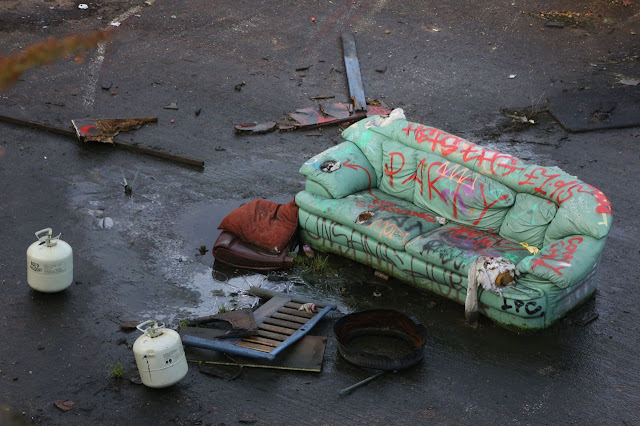 Yes, you've seen this picture before. I first blogged it in January 2014, soon after I took it at Hackney Wick. I posted it here and on Flickr, where it attracted a modest amount of attention.

But on my Tumblr blog, where I usually repost some of the pictures I post here, it took on a life of its own. It exploded and went viral, gathering more than 24,450 likes and reblogs so far. It's by far my most popular Tumblr post. (I realize that's nothing compared to the millions of views some YouTube videos get, but for me it's a big deal!)

The other day, I was talking to a fellow photographer at school. He complained that he'd been finding his images re-used without his permission across the Internet. He apparently found this out via Google Image Search, and he explained to me that Google allows users to upload a picture and search online for identical photos.

I had no idea!

So, knowing how popular my couch picture is with the disaffected kids on Tumblr, and despite the fact that ignorance is bliss, I decided to search for it.

Now, any photographer who posts pictures online has to expect that they'll be pirated and re-used to some degree. That doesn't mean we should allow it without complaint, but in my view, it's sort of the nature of the Internet. 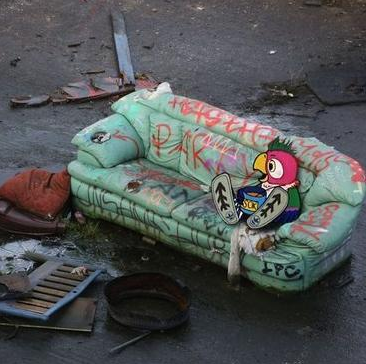 I especially don't mind if the user adapts my picture in some way. I found this guy on Twitter, using my photo as a component of his Twitter profile shot. I think it's kind of funny. It doesn't bother me at all. (Maybe he likes parrots?)

This concerns me a little more! It's an Italian photographer using my shot in an online flier for an event publicizing her "photographic project" called "lost & found." There's no credit on the photo, at least not on Facebook. So I'm wondering about this exhibit. Was she exhibiting my picture? Or was she just using it in her publicity materials (also not kosher, but perhaps not as outrageous). Was it an exhibit of photos she found online, in which case, one wonders, did she credit the photographers?

So many questions, and I'm going to ask them. Stay tuned.

By the way, one entertaining aspect of the Google Image Search function is that it shows users other pictures that are "similar" to the one they searched. In my case, Google thinks my couch looks like a tank.
Posted by Steve Reed at 7:20 AM

The internet is a strange new world, for sure. And weird. A very weird world.
Yeah. Interested to hear what that guy says.

You will have to let us know what you find out about that art show. I'd hate to think she is using other people's photos and calling them her own. That happened to my sister. Some woman started reposting my sister's photos from her blog and calling them her own. And when confronted, she didn't seem to think there was anything wrong with that.
That sofa does look like it's sitting in a war zone but, I don't believe I've ever seen a mint green, vinyl tank before.

I've used that function before and always with disappointing results. I always wonder what it is the algorithm focuses on to get the results. but yah, if you publish a photo on the internet without a watermark you might as well be telling the world here it is, use it however you want. I found one of my pics of a snake being offered as wallpaper once. I didn't really care as I don't consider my photos as being my artistic property not being a photographer.

I've used that feature, but for it to really work apparently the picture has to be EXACTLY the same. For example, if you loaded a picture of the couch from another angle I'll bet it wouldn't find your original picture. It's not very sophisticated. Even so - tank? Ha!

Well, that couch IS large and green and surrounded by destruction :)

Seriously, I hope you get answers and I hope they are satisfactory. Not optimistic, but hoping!

It is a dramatic photo. So how do we upload and search?

never mind. i googled how to do it. scary!

I gank crap off the interwebs all the time, but I've never claimed it as my own. That is some shady stuff.

I think it's wild that you got so many hits on that fabulous photo!

Other people using photos has been the topic of a recent post on the YPudding blog. I really can't see how Google Image Search decides the couch looks like a tank but the surrounds might look like some kind of war-zone.