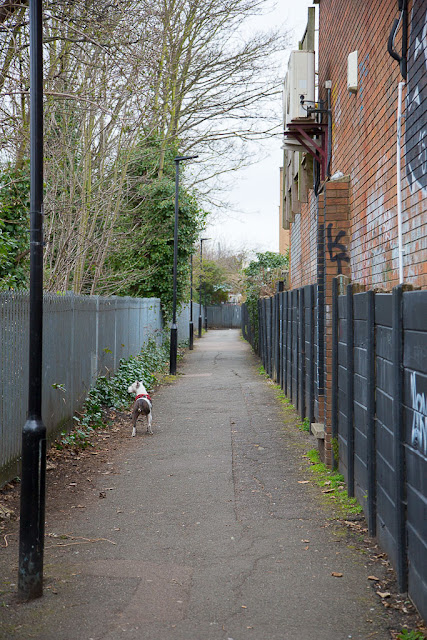 As you know, I'm always posting pictures of Olga traipsing through the woods and fields of Hampstead Heath, amid perfect copses of trees and interesting, gnarled logs.

Just to show you that we don't always demand idyllic wilderness on our outings, here's another walk the two of us often share, on a paved path that runs alongside the train tracks here in West Hampstead. It's a grittier, more urban environment, and although Olga still stays alert for squirrels, the main scenery is litter. 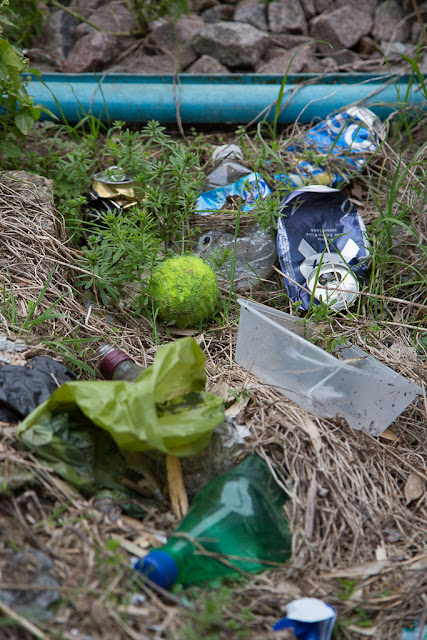 There are, for example, tennis balls... 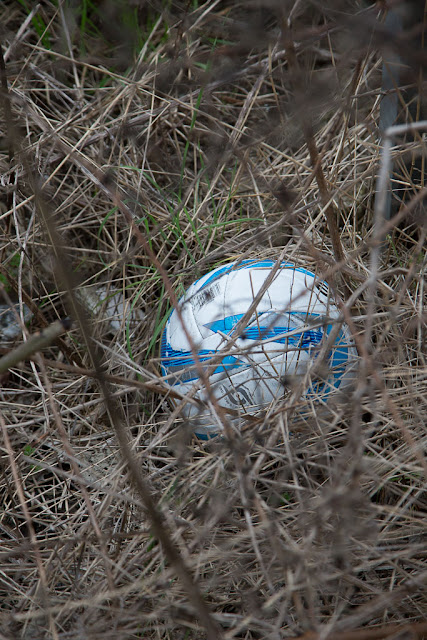 ...and soccer balls (or footballs, as they're known here)... 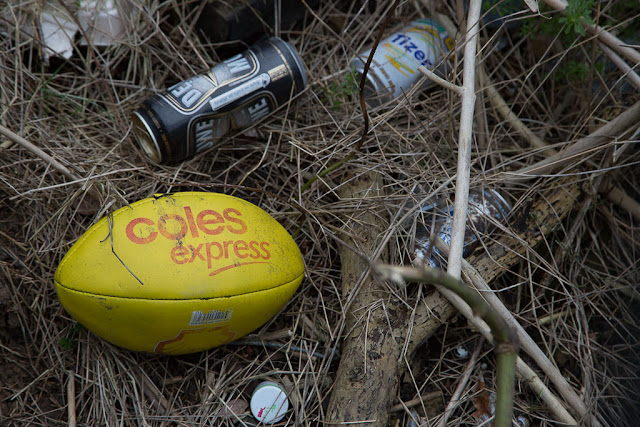 Olga would normally love to play with these toys, but they're behind a fence so she can't get to them. 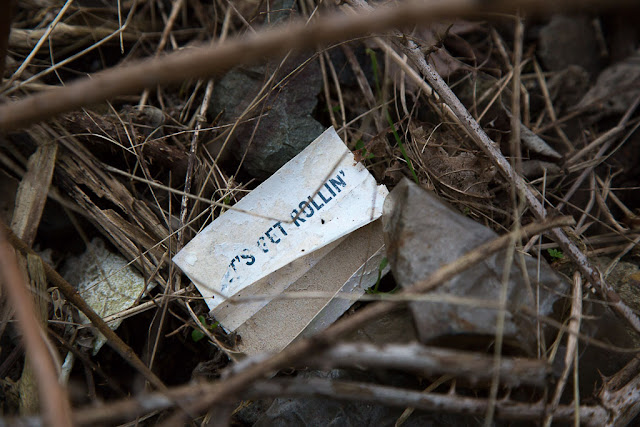 Then you have all the other trash, from conventional litter like rolling papers... 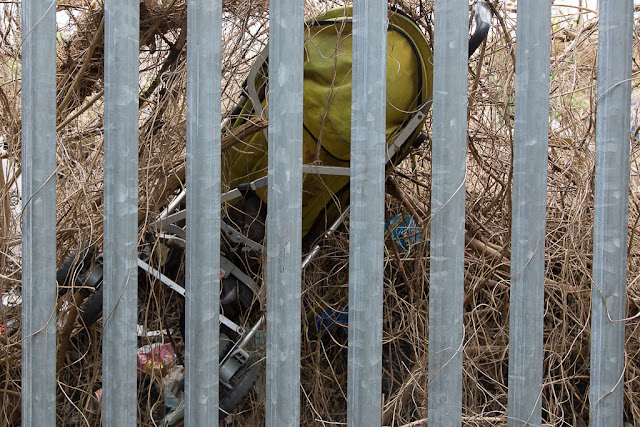 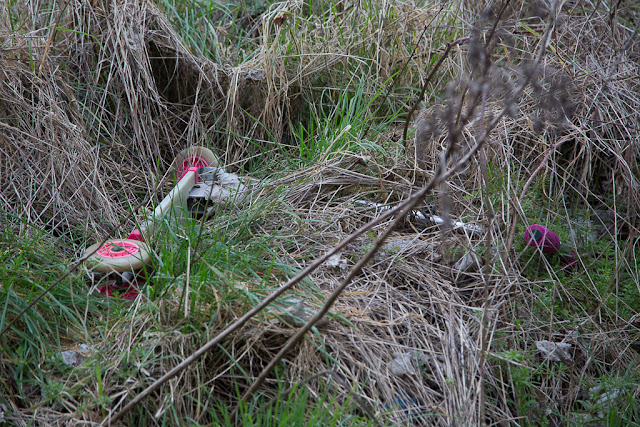 I occasionally hear complaints about the quantity of trash on the streets in London. My personal theory is that this is due partly to the dearth of public trash cans in many areas. In Manhattan, there's a trash can on practically every corner, but in London, they can be few and far between. (And often, they're packed so full it's impossible to squeeze in another bit of rubbish.)

I'm told this absence of trash cans stems from the IRA bombings in the '70s and '80s, and maybe they're still seen as a terrorism threat. All I know is, as long as there aren't trash cans available when people have waste to discard, it's going to wind up on the street -- or alongside the railroad tracks. (Granted, you couldn't fit a pushchair into a public trash can, but you know what I mean.)

Of course, even with trash cans, New York still has its share of litter problems. I don't mean to hold it up as an example of golden perfection.

Anyway...Olga and I like this walk. I find the litter weirdly interesting. 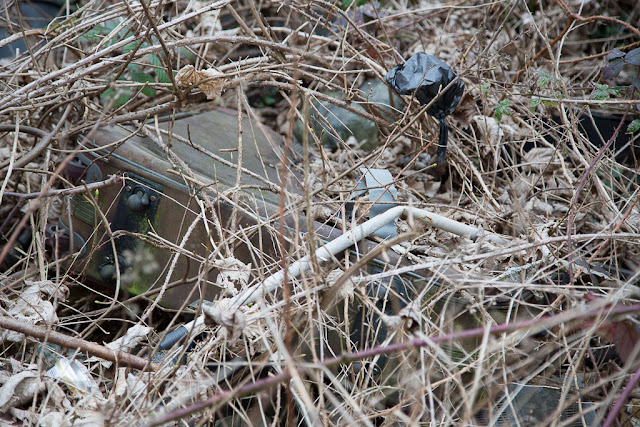 Suitcase, anyone?
Posted by Steve Reed at 6:17 AM

I was surprised to see the Coles Express football in your photo. I have always thought that Coles is an Australian company and the football does look like an Aussie Rules football rather than the pointier rugby ball. Do they have Coles Express Petrel service stations in the UK?

Even where I walk in the woods here in Lloyd, there are places where people have dumped trash. Huge piles of rotting mattresses, old kids' swimming pools, tarps, toys, a television set or two. And this is approximately half a mile from the trash place where you can dump anything for free. I don't get it.
It enrages me.

sort of like the midden from pre-historic shelters and cliff dwellers. push chairs. reminds me of my grandson when he was two or three learning to talk. he called the kitchen stool a 'stand tall'.

great trash, I am sure I could find something to do with it, I see it differently, as potential unless it is just too nasty, pooped on or mildew invested. I would like to have a huge open studio , live in a loft, and just put stuff together all day!

I'm with Ms Moon - trash dumped so close to a trash pickup makes me see red. When I used to travel to the next town every day to visit my dad in the nursing home, there was almost always a fresh dumping of fast food litter along the road somewhere - a new assortment in a new place - every night. It was so needless and so maddening! There did not even appear to be any food in it to benefit (?) the wildlife, it was just paper wrappers and drink cups that rolled into ditches within a few hours. And then every spring the local coffee shop ran a litter pickup weekend where they retrieved it all ...

Fascinating about the reason for the dearth of trash cans. I remember those days.

What a variety of discarded items!

You wonder if this stuff isn't cleaned up sometime, what will be the result.

I find the litter weirdly interesting, too, and especially through your eyes. I think it's sort of cool to notice and mark the detritus of life.

I hope the baby wasn't tossed over with the stroller.

I find all that rubbish quite depressing.