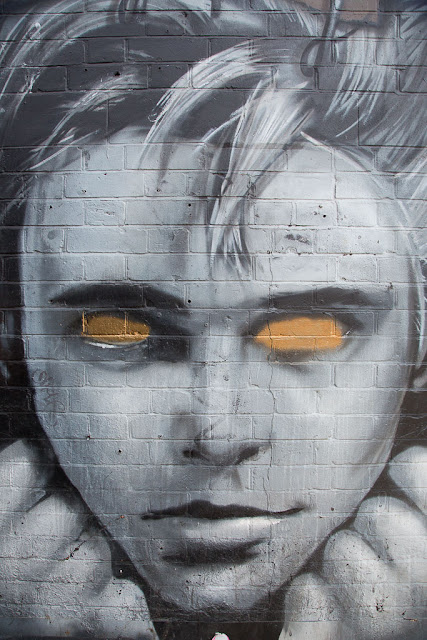 This rather disturbing face belongs to Billy Fury, or rather a mural of Billy Fury, in West Hampstead. Recently, some vandal painted out his eyes. Now he looks like zombie Billy Fury.

Fury was an early rock star, kind of a British Elvis Presley. I don't recall ever hearing of him before I moved to London, but in England he's still a well-known name. There's a statue of him in Liverpool (I overheard a tourist misidentify it as Elvis) and the path along the railroad tracks where the above mural is located has been named Billy Fury Way. It's kind of a skanky path. I wouldn't want it named after me.

This week has so far been taken up with our normal beginning-of-school training and meetings. I went to child protection training and data security training on Monday and our big all-staff motivational assembly yesterday. Main lesson learned in data security training: DO NOT ABANDON PRIVATE STUDENT DATA IN AN UNLOCKED BAG IN A PUB. (This isn't much of a risk for me, since I don't often handle and certainly don't carry around private student data.)

Today I finally resume my normal work schedule, going in at 9:15 and staying until 5:15, which I'm happy about -- more time to walk Olga in the morning!

Last night Dave and I went to Royal Albert Hall with some friends to hear the BBC Orchestra perform pieces by Tchaikovsky, Rachmaninov and Prokofiev. We were sitting in a box -- courtesy of one of the families at school -- just two boxes away from the royal box seats! I didn't recognize anyone in the royal seats, though. If there were any royals there they must be quite low on the totem pole.
Posted by Steve Reed at 7:04 AM