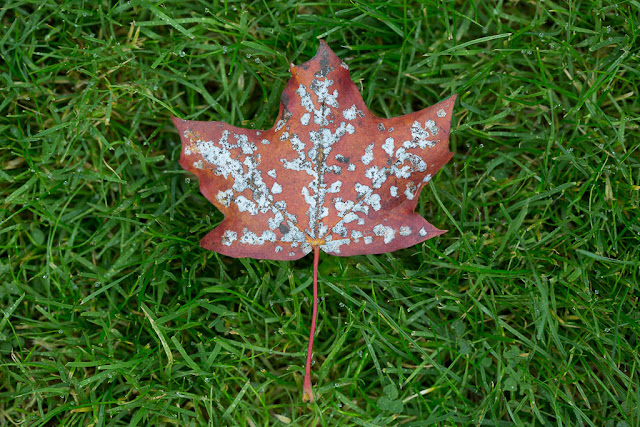 Well, this is it. As of today, I am officially 50. I guess to be completely accurate I'd have to mark the specific hour of my birth, which I can never remember -- I think it was 6-something, but morning or evening I have no idea -- and with time zone changes and whatnot, well, it's just way too complicated! So let's just say I'm there.

Not that it feels any different from being 49. In fact I've been thinking of myself as 50 for a while, rounding upward, so it feels good to have finally crossed the line. I remember telling people when I turned 40 that 40 was nothing, but 50 would be SCARY. And it's not.

So far, anyway. Ask again when the results of the U.S. election come in. 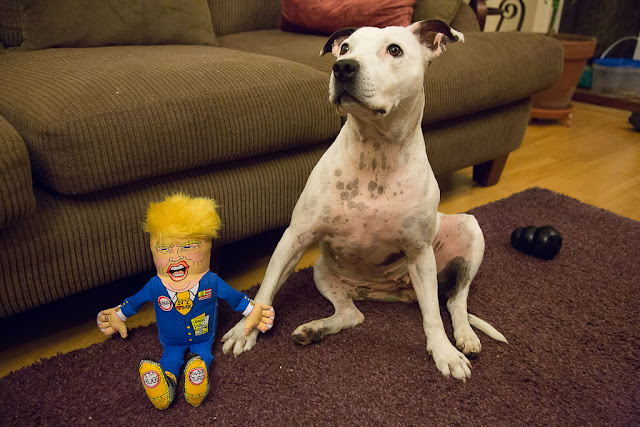 Last night I had a rare opportunity to get together with my friend Susan, who in another lifetime hired me and was my supervisor at The New York Times. She's in town with her husband, on her way to a family wedding for which she went hat-shopping. (She bought a feathery fascinator, which is a very British thing to wear to a wedding!) I hadn't seen Susan in at least six years, and a lot has happened in the interim -- she had some serious and dramatic health problems that involved an organ transplant and a lengthy recovery. But she looks great and it was wonderful to be able to show her a bit of our lives in London. Being a blog-reader, she especially wanted to meet Olga, and brought her a new American Kong and a Donald Trump chew toy, which Susan hoped Olga would eviscerate before our very eyes. Olga, however, is unsure what she's supposed to do with Donald. In the photo above, she looks a bit terrified of him. (Aren't we all?!)
Posted by Steve Reed at 6:43 AM

Half a century...not all of us reach that milestone. Well done!
Did you know that David Schwimmer was born on the same day as you? It was also the day that Mississippi John Hurt died.

Happy half-Century and I hope you and Dave and Olga have a swell day! She's a smart one to avoid that doll!

Steve, I just hope that this is the best decade ever for you. You have lived such an incredibly varied life. I mean- didn't you work for the Lakeland Ledger? AND the NYT's? Whoa! That's something most of us surely can't say. And of course, here you are living in London with your husband and y'all take amazing trips and I love the way everything seems to balance out in your life.
I'm so glad I've gotten to know you here and in "real" life as well. You're just a very fine human being and I hope your life just keeps getting better and better.
Here's to cake and to long walks with Olga and more pictures and martinis and adventures and love and, oh, well. A Trump-free America? Not that that has anything to do with your birthday but wouldn't that be a nice start to your fifties?
Happy birthday, dear man. Much love from Lloyd to you.

50 wasn't so bad. At 50, I figured I was grown up. I threw away all the craft projects I started and never finished. Know thyself, I told myself. I also stopped tolerating mean people. I figured I had done my duties as a child, as a parent, and as a child of an aging parent and I could say and do whatever I wanted (not that I didn't most of the time anyway). The 50s were a good decade. 60, now, that one threw me but at 66 I finally accepted it.

Well, happy birthday! I hope you have a great day. Really all birthdays are the same. Age is in our minds.

Happy Birthday! I hope you are having a great day! I think I said the very same thing when I turned 40 and quite frankly none since have been very scary. Even this last one which frankly doesn't even seem real.
None of us are sure what to do with Donald so Olga shouldn't feel bad. However, when Olga does finally figure it out and has torn him from limb to limb, I want to see some photos!

Happy birthday, Steve! I had a good gathering of a few long-time friends who came from far and near to help me celebrate my 75th birthday awhile back and it really wasn't scary at all. I don't think any of my birthdays have scared me and nowadays I'm just happy to have more and more of them! :^D

Happy Birthday, Steve! May you have a wonderful year ahead, and many more. I'm happy to have "met" you here; your photographs and honest, down-to-earth writing are always a bright spot in my internet day!

Happy happy birthday!! I LOVE the Trump dog toy - hopefully Olga will figure it out in time :)

Happy Birthday! ( I, too, was hoping Olga would tear The Donald to shreds). Enjoy being 50 and going on.

Thanks for the birthday wishes, everyone! :)