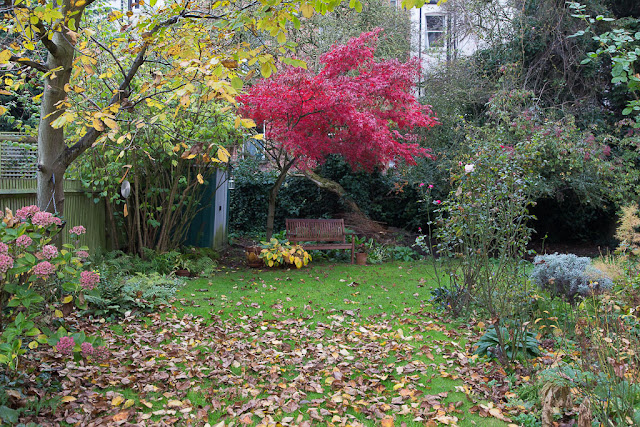 This is what our garden looks like now. We've pretty much just let it go -- we saw Mrs. Kravitz out weeding and raking a few days ago, and she said something like, "What happened to your garden?!" We told her that in the fall, we let nature take its course.

I probably do need to rake those leaves at some point.

Wasn't the news from Australia encouraging? I'm so happy marriage equality passed there by referendum, and by such a solid margin!

On the other hand, I've been reading about the college students around the USA who have died recently from alcohol poisoning. I was just talking to my boss about this the other day -- she was saying that some students at the school where we work have needed hospital treatment because they've had too much to drink at parties. Maybe I'm naive (likely) but I never heard of this phenomenon when I was in school. I mean, people got drunk, sure, but I didn't know anyone who had to have their stomach pumped or who suffered any long-term effects.

The students in my dorm, in college, turned drunkenness into a game. We had a weekly "puke award" that hung on the door of whichever resident of our floor got the drunkest at the weekend. This was not only sanctioned by the RA, I think he might have started it. Can you imagine such a thing happening now? (For the record, I never won the "puke award.")

My boss said that in our day, we drank with mixers, but she thinks kids today (particularly girls) don't like to use much mixer because they're worried about extra calories. So they wind up drinking much stronger drinks. And fraternities, in particular, seem to use drinking as a rite of initiation that often goes wrong.

Anyway, I'm glad high school and college are behind me!

Apropos of nothing, the other day I was walking down the street past a woman and a little girl, and the girl, seeing a pigeon, started crowing at it like a rooster. "Cock-a-doodle-DOO!!" she yelled at the pigeon, over and over. The mother said, "Dear, that's not a chicken." But the girl just kept right on crowing.
Posted by Steve Reed at 6:53 AM