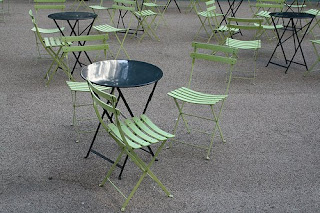 I’ve been thinking about the Maine vote repealing a law allowing gay marriage.

As some of you know, I've always been pretty moderate on this issue. I’d like to be able to get married, but the fact that I can’t doesn’t change the degree of love I share with my partner. The most important thing is still there, no matter what.

That said, I do think the government must treat gay and straight couples the same legally. The resulting arrangement doesn’t have to be called marriage. Civil unions, partnerships, whatever – that’s all fine with me. For example, I’d be happy if we worked on the federal level to eliminate the tax burden on gay couples who share health insurance, or if we mandated hospital visitation rights for gay partners. I can do without "marriage," per se.

I can respect the fact that some people believe marriage to be a religious sacrament, and they’re not ready to extend it to gay relationships. I want to be sensitive to religious differences and make room for that hesitation.

However, I think the hesitation of opponents is rooted mostly in fear. Churches and the political right have waged a battle of disinformation with the American public. They’ve told voters that if gay marriage passes, their children will be indoctrinated and society will fall apart. As absurd as it sounds, it’s been a very effective message. No matter how progressive they may feel themselves to be, few parents want their children to be gay, and they’ll take steps to prevent it if they believe they can. I think that’s what we’ve been seeing at the ballot box.

If I could tell the voters of this country one thing, it would be this: “Your children will not choose to be gay because there’s gay marriage. But if you do have a gay child, he or she may lead a happier, more secure life because marriage will be possible. Your straight kids won’t care one way or another.”

As for God, well, I think he or she would approve wholeheartedly of gay marriage. But as I said, if people aren’t willing to go there yet, I can work with that. Just don’t sock me in my pocketbook or prevent me from visiting my partner in the hospital. Recognize that my partnership is the legal equivalent of a marriage, if not identical according to your social and religious definition.

There are people who think, justifiably, that "separate but equal" is fundamentally unequal. They're right. But it's also better to move ahead incrementally than backslide because we're demanding more than people are ready to give. Eventually, we'll get there -- I have no doubt.

I think it's crap to deny anyone the right to marry, to insist that marriage can only exist between a man and a woman.

Thanks for your moderate, open minded post on this Steve.

I'll be happy when no one really thinks about which gender is which - when woman are paid the same salary as men for the same work, when any two people in love can marry.

All systems of oppression are rooted in the same idea - that one group or another is "better", "higher" or more deserving.

"If I could tell the voters of this country one thing, it would be this: “Your children will not choose to be gay because there’s gay marriage.... Your straight kids won’t care one way or another.”

You old bastard you.

This is all so logical and well-stated. I'm always amazed that not everyone sees it this way. Enlightenment is such a slow process. I hope in our lifetime we'll make inroads toward equality on many fronts.

I am so disappointed with the people of maine right now....

I'm with you on this Steve. The interests of church and state in the role of a union are different, although there is an overlap of interests.

Let's not begrudge either.

well, i think we may get there too but its going to take a fair bit longer yet unfortunately