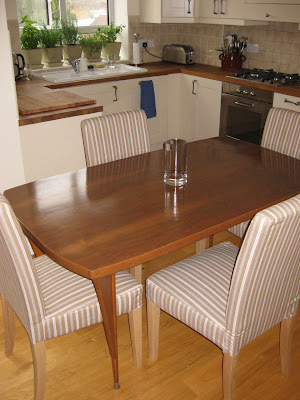 As I wrote yesterday, by the time the movers departed, we'd been unable to get the dining room table through the doorway into the dining and living area -- it was trapped in the foyer, standing on end. I thought Dave and I would be able to resolve the problem once he got home, but the two of us couldn't get it through the door either. The legs were just a little too long.

We'd already taken the door off the hinges, so I was in a state of desperation. I was afraid I was going to have to make a drastic decision. Dave floated the idea of shortening or temporarily cutting and then repairing the table legs, which I ruled out immediately. I was envisioning having to ship the table back home again. (Selling or otherwise disposing of it isn't an option -- as you may remember, my dad built this table, and it was my childhood dining table growing up.)

We ended up calling a handyman, and asking him to remove the two inner strips of the living room door frame. I wasn't sure what this would entail, but the movers said it would be easy -- and indeed, the handyman was able to take them off with no problem. We slid the table through and he returned the door frame to its original state. We then re-hung the door. So all is as good as new, and a major crisis has been averted.

This handyman was AWESOME. He also hung all our artwork (our walls are concrete) and drilled a hole for the television cables in the book shelf, eliminating those unsightly wires. (We had the landlord's permission!) And he only charged £125, or roughly $200, which for the work he performed seemed reasonable.

So now our home really IS a home. Whew!
Posted by Steve Reed at 5:10 PM

being acquainted with an awesome handyman is one of the true gifts in life.

Good handymen are hard to find...Your luck is extraordinary. I'm glad everything worked out for you.

looking great....all ready for the pups!!

Home sweet home! So glad you were able to get the table in place. X

I just caught up with your trip to Iceland. Glad you avoided the schnapps they call "Black Death." yeah. Your dream is amazing, running away from New York and the path you imagined for yourself. All will be well in Mankato!

WHEW! Your table is so pleased! Well done, you!