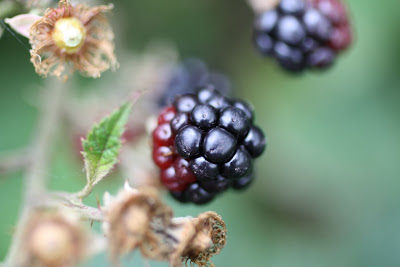 I don't know why I didn't think of it before.

I've already mentioned that Sylvia Plath is one of my favorite poets. I've liked her poetry since I was a teenager, when I first came across her excellent, scary novel "The Bell Jar." Her poems "Mushrooms" and "Tulips" were in one of my high-school literature anthologies, and later I picked up a copy of "Ariel" at some used book store. I loved the way she combined words and sounds, and I suppose like any good drama-loving gay boy I was also drawn to the turmoil of her life -- her struggle with depression and mental illness and, ultimately, her legendary suicide.

Plath lived the last years of her life in England, mostly in London, with her husband Ted Hughes and their two young children. It occurred to me only a few days ago that I could go find her house, as well as some of the places she mentioned in her poetry. A self-directed Sylvia Plath literary walking tour!

So I looked up her former addresses, and found two in London -- a house on Chalcot Square where she lived from 1960-61, and another on Fitzroy Road where she lived later and eventually died in 1963.

I set out yesterday, after Tuesday's rain and wind had subsided, and took the Tube to a station near Regent's Park. Plath's homes are in Primrose Hill, a neighborhood northeast of the park near Camden Town.

First I went to Fitzroy Road. I saw as I approached the house that it bore a blue marker noting that someone distinguished had lived there. 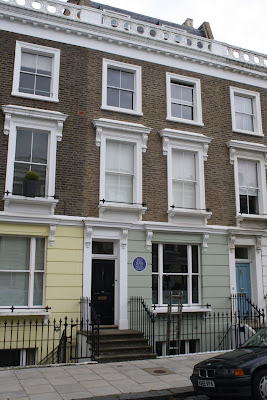 But surprise! The marker isn't for Sylvia: 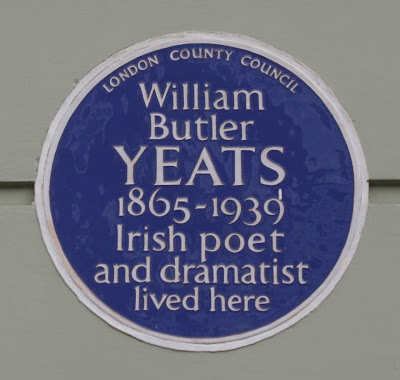 When she moved into the house in November 1962, Plath considered it a good omen that it was Yeats' former home. Having separated from the adulterous Hughes, she and her children occupied the top two floors. It was here on Feb. 11, 1963, during one of the coldest winters in London's recorded history, that Plath sealed off the kitchen from the rest of the house and put her head in the gas oven.

I next went to Plath's home on nearby Chalcot Square, where she lived while writing "The Bell Jar" and many of her famous poems, such as "Tulips." This house also bore a marker, and happily, this time, it was for Plath: 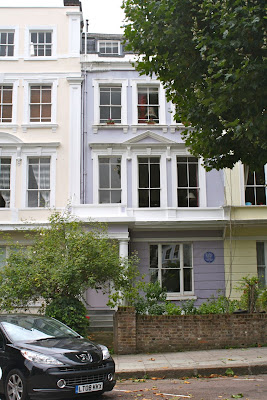 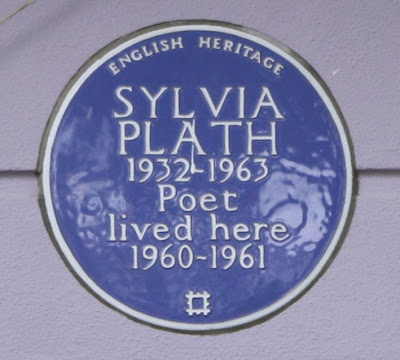 As I stood in the street in front of the house, I turned to look out at Chalcot Square, a small park with a playground, and tried to imagine what it looked like back then from her windows. Was she inspired by this house, this view? I wondered if any of the park's trees were alive 50 years ago. Had she walked beneath them?

Finally, I walked about two miles north to Hampstead Heath, a large park north of Chalk Farm and Kentish Town. Hampstead Heath is the location of Parliament Hill, the "bald hill" where "the new year hones its edge" in the opening lines of one of my favorite Plath poems, "Parliament Hill Fields."

Plath wrote "Parliament Hill Fields" in February 1961 while living at Chalcot Square. It's about a miscarriage she'd had the previous autumn, and her progression from mourning the lost child to embracing her living daughter and the realities of daily life. Basically, it's a poem about recovery.

I found Parliament Hill and climbed it. I sat on a bench at the top, looking out over the London skyline. 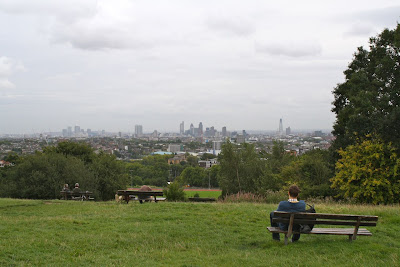 I'd brought along my copy of Plath's "Collected Poems," which won her a posthumous Pulitzer Prize in 1982, and I read "Parliament Hill Fields" as I sat on the bench.

Southward, over Kentish Town, an ashen smudge
Swaddles roof and tree.
It could be a snowfield or a cloudbank.
I suppose it's pointless to think of you at all.
Already your doll grip lets go.

I looked up, over Kentish Town, and imagined the smudgy sky fifty years ago. The experience of a miscarriage is uniquely female, but all of us move beyond personal disasters, and I imagined Plath coming to terms with her loss.

The tumulus, even at noon, guards its black shadow:
You know me less constant,
Ghost of a leaf, ghost of a bird.
I circle the writhen trees. I am too happy.
These faithful dark-boughed cypresses

Brood, rooted in their heaped losses.
Your cry fades like the cry of a gnat.
I lose sight of you on your blind journey,
While the heath grass glitters and the spindling rivulets
Unspool and spend themselves…

I realized while reading the poem that Plath wrote it two years to the day before her suicide. It came before many of the poems that made her famous -- the so-called "Ariel" poems like "Daddy" and "Lady Lazarus." She was growing as a poet, and even with only two years left, she still had a tremendous amount to say.

Despite her depression and her untimely end, I've never thought of Plath as morbid. On the contrary, I've always found her work beautiful and even inspiring. As I left Parliament Hill for the long walk back home, I stopped and picked blackberries -- the topic of another favorite Plath poem -- and ate them straight from the bush.
Posted by Steve Reed at 9:08 AM