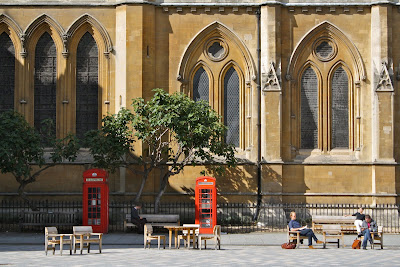 So whatever happened to all that zen stuff, anyway? I wrote a lot about my practice in the early days of this blog, but in the last year or two it's taken a back seat to all the other adjustments in my life.

Well, I'd like to think it's still with me, though to be honest my practice has been pretty slack for the past year or so. I've meditated occasionally, but I haven't returned to practicing with a group since I left the Zendo and Manhattan in late 2009. I made some half-hearted attempts to find a group in New Jersey but never actually went. If "everything is practice," as they say, you could argue that I never stopped, but I don't feel like my day-to-day life held much awareness of the Dharma.

Now, in London, I'm starting to sit again, though so far only at home. I'd like to return to more active, conscientious practice, but I have mixed feelings about rejoining a Zendo. I sort of like reading and sitting on my own. Maybe that's because it doesn't challenge me to leave my comfort zone and do things I'd rather not, like take up a service position or go on a weeklong silent retreat in the heat of August. Maybe I'm just a Buddhist lightweight. Or maybe, to be less judgmental about it, this is merely more my style.

In any case, now that life is settling down, I hope to once again practice more actively. In addition to sitting, I've been trying to incorporate some Dharma study into my days as well. I've been rereading a few books on the fundamentals, like Robert Aitken's "Mind of Clover," and I've been scouting out some Zen blogs on the Web. 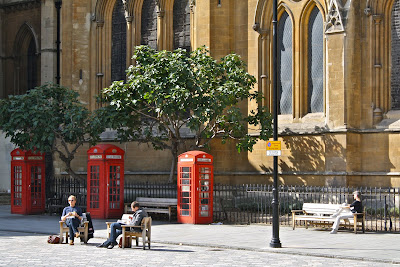 My photography has helped by keeping my eye fresh, helping me appreciate the newness of my environment and society. The street art isn't as great a component of my photography here -- perhaps because there's just not as much of it as there is in New York. That's been a nice change too. I'm seeing a greater variety of subjects, like the sun-seekers in this churchyard near Russell Square yesterday.

I shot the scene from a couple of angles, and these are my two favorites. I like the bottom photo because the guy in back isn't blocked by one of the guys in front -- but I like the straight-on cleanliness of the top photo, too.
Posted by Steve Reed at 11:16 AM