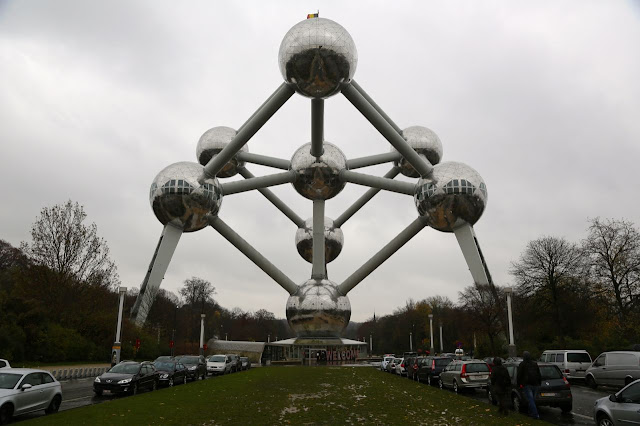 We took a walking tour of Leuven yesterday morning, checking out more of the local sights. They were beautiful -- but by this time I had my heart set on seeing something entirely new.

The Atomium, in Brussels, is a remnant of the Universal Exhibition of 1958, one of those World's Fair-type events that don't seem to happen anymore now that the world is smaller and we all fly everywhere with such ease. The brainchild of architect Andre Waterkeyn, it's supposed to represent an iron crystal magnified 165 billion times. It wasn't intended to outlive the Exhibition, but the locals apparently loved it so much that it was never torn down. 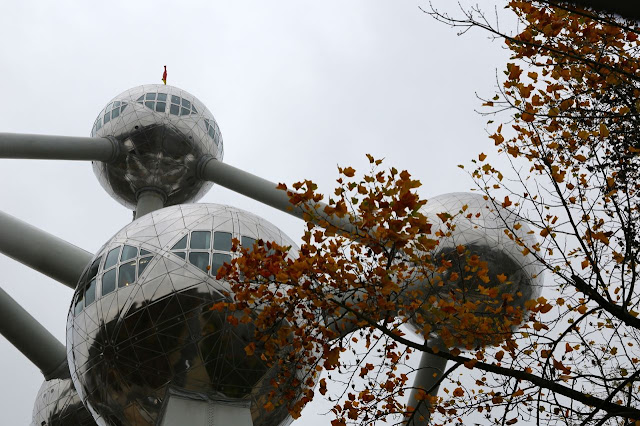 By the '90s it had deteriorated quite a bit, so the government decided to fund a full restoration. The new Atomium opened in 2008, and now it has a swanky restaurant at the top and exhibition spaces in each of the "atoms."

Yesterday, after leaving Leuven, we drove to Brussels and made a point of visiting the Atomium. We even had lunch in the swanky restaurant, gazing down at the grounds of the Universal Exhibition, which have since been put to many other uses. There's an amusement park called "Mini-Europe," with tiny versions of the Arc de Triomphe and Westminster Palace, among many other landmarks, as well as a substantial swath of parkland. 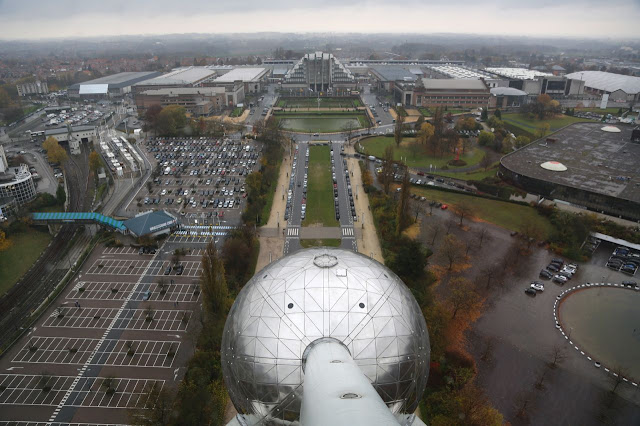 This is just the kind of cheeseball sightseeing I really like. Cathedrals are fine, but give me some silly mid-century optimism.

After spending more time than we had intended on a leisurely lunch inside the uppermost iron atom, we drove into Brussels, returned the car and hopped onto our respective trains. Dave and I came to Ghent, where we'll spend the day before heading back to London tonight. All I've seen here so far in Ghent is a big bowl of mussels, but that was a good start!
Posted by Steve Reed at 7:16 AM

Very cool. Kind of like the big globe leftover from the New York World's Fair (of which my family visited; twice!)

I had to smile at those gray skies. I remember them well from our stint in Holland.

Enjoy Ghent! It's a beautiful city.

And it's sort of like Las Vegas! Without the gambling and stuff. Miniature Great Wonders Of The World.

The Atomium! How cool is that. You see one cathedral, you've seen them all. but something unique like that is more fun and interesting.