Evening Routine, With Sunflowers and Klingons 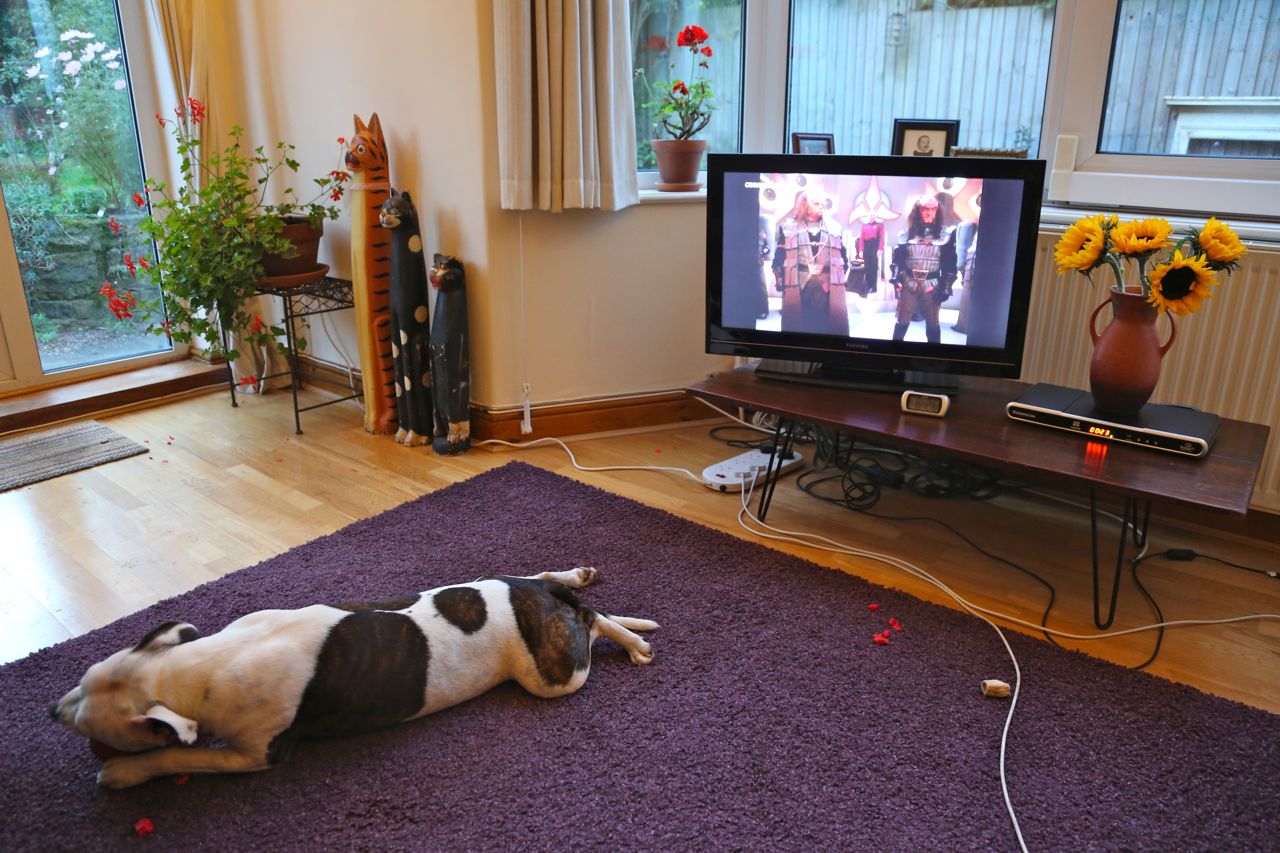 This was the scene in our living room yesterday evening, as Dave and I decompressed with an episode of "Star Trek: The Next Generation" and Olga decompressed by gnawing her red Kong toy into pieces. Yes, this is the same Kong that we rescued from the rear of Yale Court. No Kong lasts very long around here.

(Come to think of it, "Kong" sounds like a Klingon name, doesn't it?) 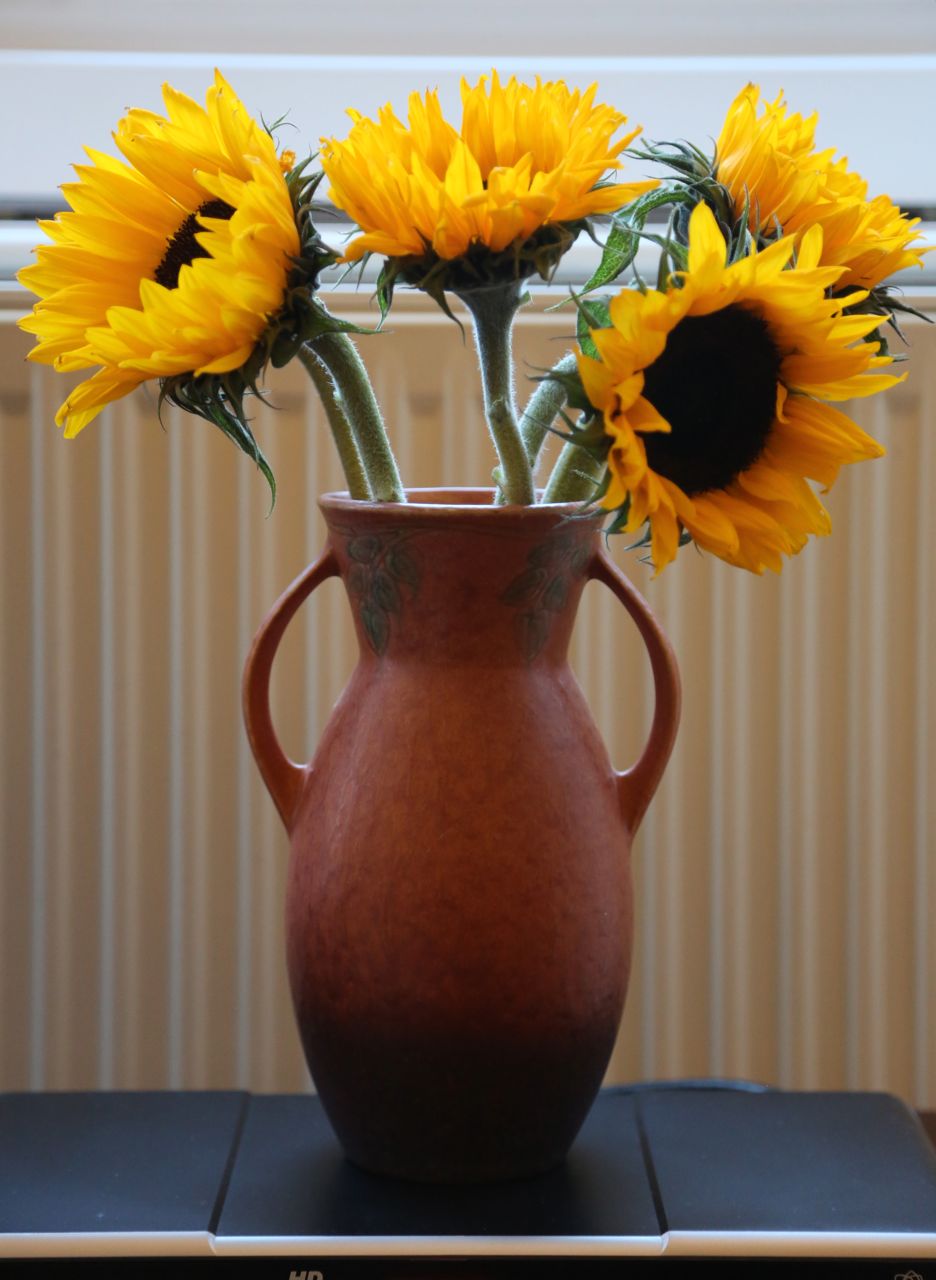 I bought the sunflowers at Tesco a few days ago and put them in one of my grandmother's Roseville vases. Only afterwards did I remember that this vase isn't completely watertight -- it gets damp around the base. Maybe the pottery is just too porous, or too old, or maybe the glaze is too thin. Fortunately the sunflowers are sitting on a plastic surface, so no harm done -- unlike the time this vase left a ring on my grandmother's pristine mahogany furniture. I remember Grandmother being concerned that it would leak, and I assured her it wouldn't, because who ever heard of a leaking vase? And then it did. I guess I should have listened to her -- it was her vase! She should know!

Anyway, this is pretty much what every evening looks like around here.

I got my absentee ballot for the general election in Florida yesterday, and promptly voted and mailed it back. (Yes, I am still entitled to vote in the states, as a U.S. citizen living overseas.) I'm excited being able to vote in my home state once again -- as opposed to New Jersey, where I voted in the last election. And who knew there was a medical marijuana referendum on the ballot?! You can bet I gave the thumbs-up to that, after reading about how much medical marijuana has done for Sophie, the daughter of my blog pal Elizabeth. I was also much amused to see a man nicknamed "Skeeter" running for the Mosquito Control District in my home county. Of course, since Skeeter had his nickname printed on the ballot, I'm sure he expects it to work to his advantage.

This Ebola thing continues to get scary, doesn't it? Until recently, it was easy to reassure ourselves that the infectious nature of Ebola was a side-effect of medical care in Africa, where infection control and treatments are dismal. But now, with a man dying in an American hospital, and a nurse getting infected in a Spanish hospital, we have to appreciate how dangerous it really is. I felt sad about the nurse's poor dog being euthanized, too -- it seems like a minor footnote, but it underscores the need for science to better understand the virus and to set public health policies for pets.

I'm starting this year's Halloween read -- the original "Frankenstein," by Mary Shelley. After enjoying "Dracula" so much last year, I'm looking forward to it!
Posted by Steve Reed at 6:12 AM

Thank you, Steve! That was so nice of you to vote for the issue in Florida -- it's pretty controversial there, even among supporters. The strange thing about these state to state laws governing marijuana is how they "get around" the issues, write bills that are way too limited, etc. But every step forward is positive, and I'm mostly impressed that you still vote! Finally, so funny you mentioned "Frankenstein," because I recently purchased the Audible version and am happily driving around LA listening to it.

Skeeter? How fun to see that whimsy continues in American politics.
But maybe that's a given in the South.

I fear for this country if the Republicans get control of the senate. as for Ebola, the news media has hyped up the fear machine as usual. yes, it is deadly but it is far less infectious/deadly than the flu for instance or measles or tuberculosis or HIV. I saw a chart on FB comparing it to a host of other diseases. I tried to find it via the internet search but couldn't.

I really tend to not freak out about things like Ebola. I guess I'm kind of fatalistic - either they'll corral it or they want. Either it will head my way or it won't. There's not much I can do about it except pray & wash my hands :)

I prefer voyager myself.......janeaway is a peach

Seeing your living room makes me long for the day that my new living room will be so neat and tidy. The movers come next Friday and I fear I'll be unpacking boxes for another two weeks after that. After all, I've been packing them up for the past two weeks.

Your living room looks like a very calm place. Wish mine was so tidy! I notice that the plastic you mention is on top of an electrical item! Health and safety at all times! It is a very classic looking vase and suits the sunflowers well. Is a Kong one of those big rubber bone things? Cats don't have them so I am mystified!