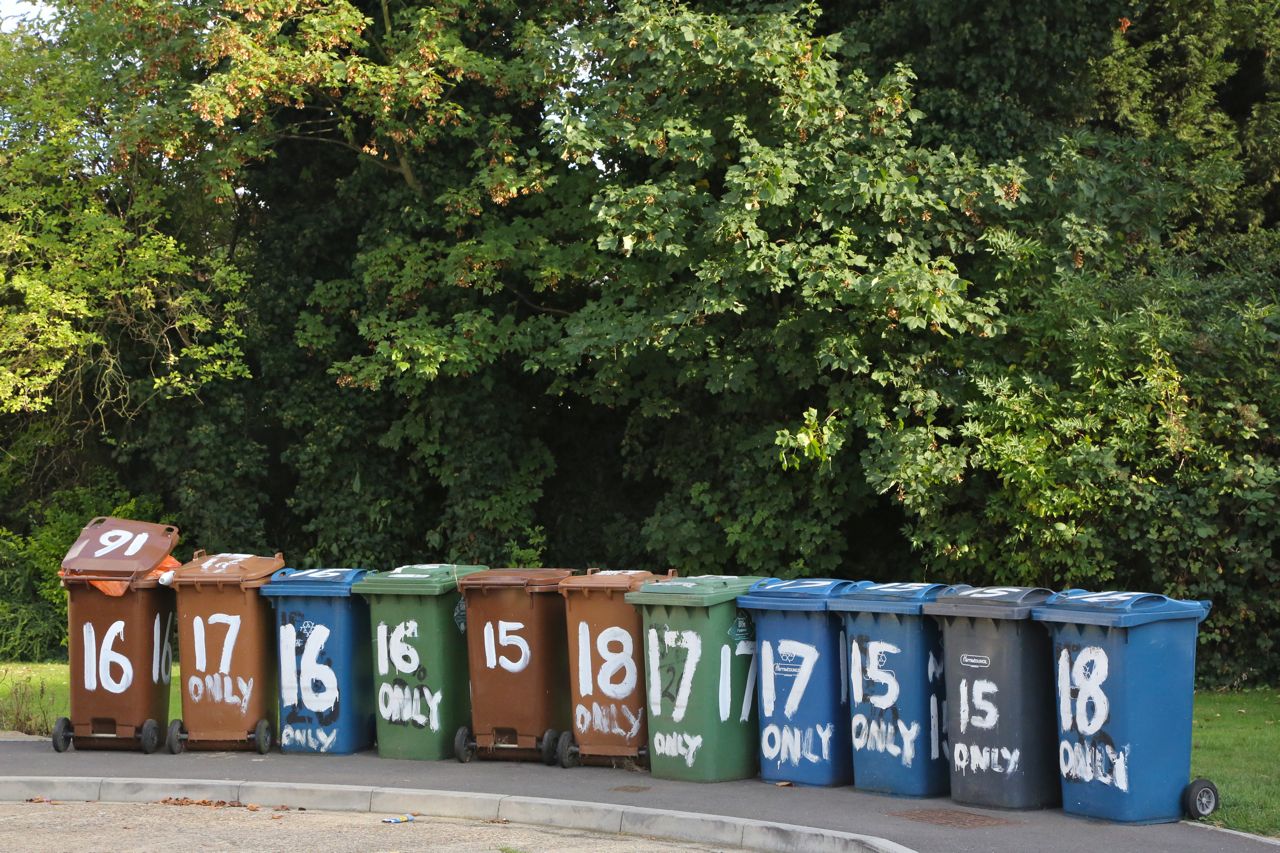 Our upstairs neighbors appear to be moving out. That in itself is not a problem -- we barely even say hello to them. The problem is that they're throwing away massive quantities of stuff.

We share garbage and recycling bins with them, and we have weekly garbage pickup on Friday mornings. For the last two weeks, Dave and I have contended with an overfull garbage bin that we regularly have to tamp down in order to cram in our little grocery bag of garbage. Eventually it's so full that the lid stands open and the garbage protrudes (like the bin on the left in the top photo).

This has been only a mildly irritating temptation to neighborhood foxes -- until yesterday. The garbage men came about 7 a.m., and I thought, "Whew! We finally have an empty garbage bin." And then, when I left for work at 8 a.m., I went to move it back to its position in the alley beside the house and it felt really heavy. I looked inside and it was full again.

I was furious. Why, if our neighbors had more bags of garbage, didn't they get them downstairs before the garbage men came -- rather than making us live with it for another week?

Not only that, but they seem to be throwing away everything. Perfectly good towels. Shoes still in boxes. A tennis racket. Stuff that could easily be taken to the charity shop. The waste makes me insane.

And another thing -- why is it always my job to put the trash cans back into the alley after the garbage men come? Otherwise they'd sit on the sidewalk in front of the house all week. Far be it from the neighbors to touch the garbage cans after they have filled them to the brim.

I take comfort from the fact that this situation ought to end fairly soon. But we have a neighbor on the other side who also uses our recycling bins, because she believes her alley is too steeply paved to contain a bin of its own. I don't know where she puts her garbage -- maybe it goes in our can, too.

So I'm basically managing the garbage cans for three households.

How did this happen?

(Photo: These bins look like ours, but they're not ours -- they're for an apartment complex in North London that I came across on one of my walks.)
Posted by Steve Reed at 7:04 AM

Is it possible to get your own bin? Um, with a lock? Is that selfish of me to suggest? I have just read the writer David Saunders' speech on being kind. But your upstairs neighbor is certainly not being considerate. This post resonates for me as my daughter has just been describing her own garbage blues in the house where she lives with other students. We never think about these thing until faced with them. In any case I wish you good neighbors after this lot moves out.

The waste of it would drive me insane too. What odd people they must be! I'm glad they'll be gone soon.

I'd probably be pulling out the towels and shoes to donate somewhere. I hate when people throw out perfectly good stuff too or don't recycle. that said, we abandoned a butt load of stuff when we sold the city house. but then no one was moving in. it was just too damn hot in the middle of summer and we just didn't have the time to deal with it all. the builder was OK with it, said he had a guy who would go in and clean it out so I hope that the usable stuff was gathered up and something good was done with it. as for who trundles the garbage can. I have found that once someone does something ONE time, that becomes their job and no one else will do it.

How very annoying! And the problem is that if you go on strike the bin would just sit there because you're probably the only one who cares. :(

Oh, this is such an ongoing issue among city dwellers in any place that has a similiar garbage collection set-up.

The business of people dumping stuff in bins has been partially solved where I live by our local council providing collections for people who need a quantity of discarded goods collected.

It happened because you can't help yourself.