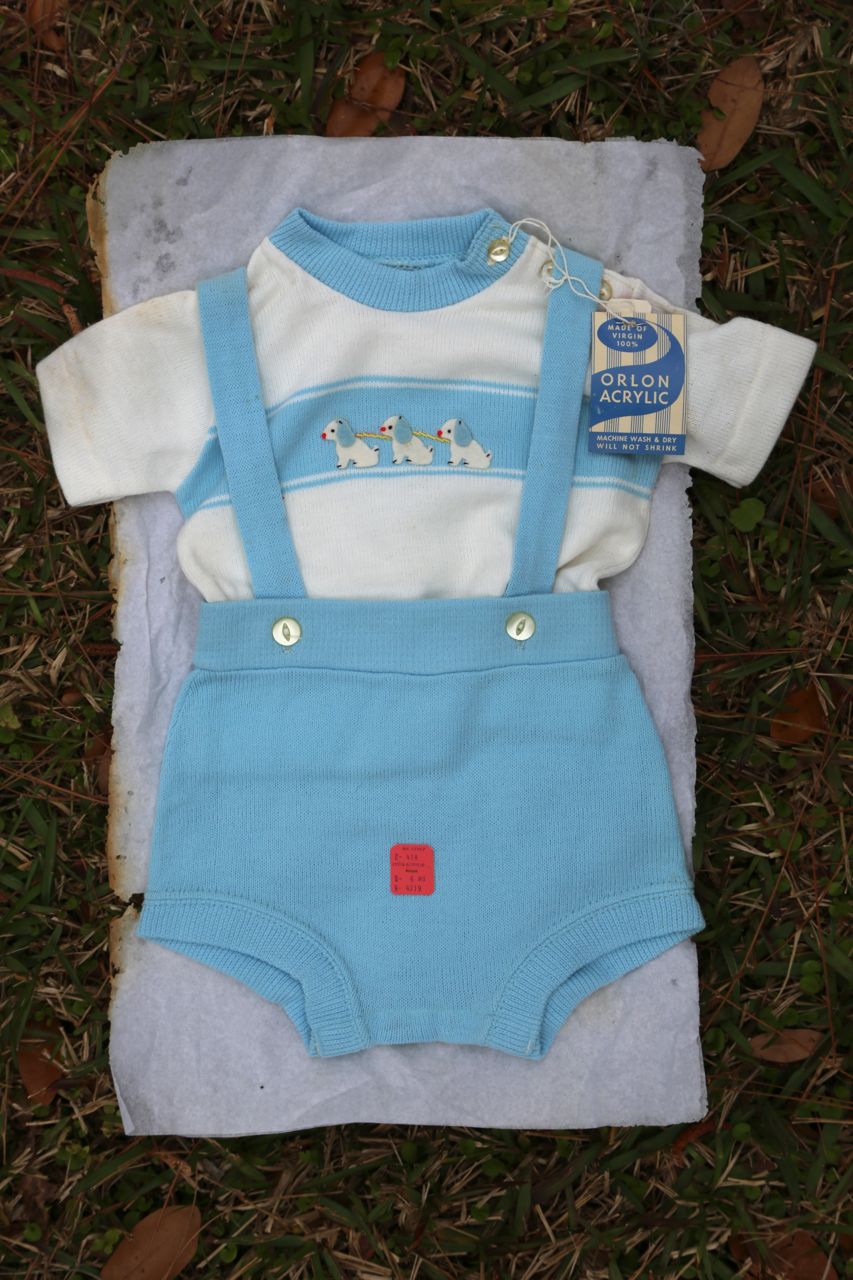 It's amazing the things you find in a house that has been occupied by a single family for decades. Things seem to accumulate without anyone noticing, like coral on a reef or calcium buildup on a plumbing fixture. Before you know it, you're surrounded by stuff.

My mom has actually done an admirable job of purging things already. But we're finding some funny odds and ends lying around.

For example, why do we have this 45-year-old baby outfit, apparently never worn, with price tags still attached? I love how it's made of "100 percent virgin orlon acrylic." I'm not sure how acrylic can be virgin, but whatever. As Mom said, "It's probably hot as fire."

It's going to charity. 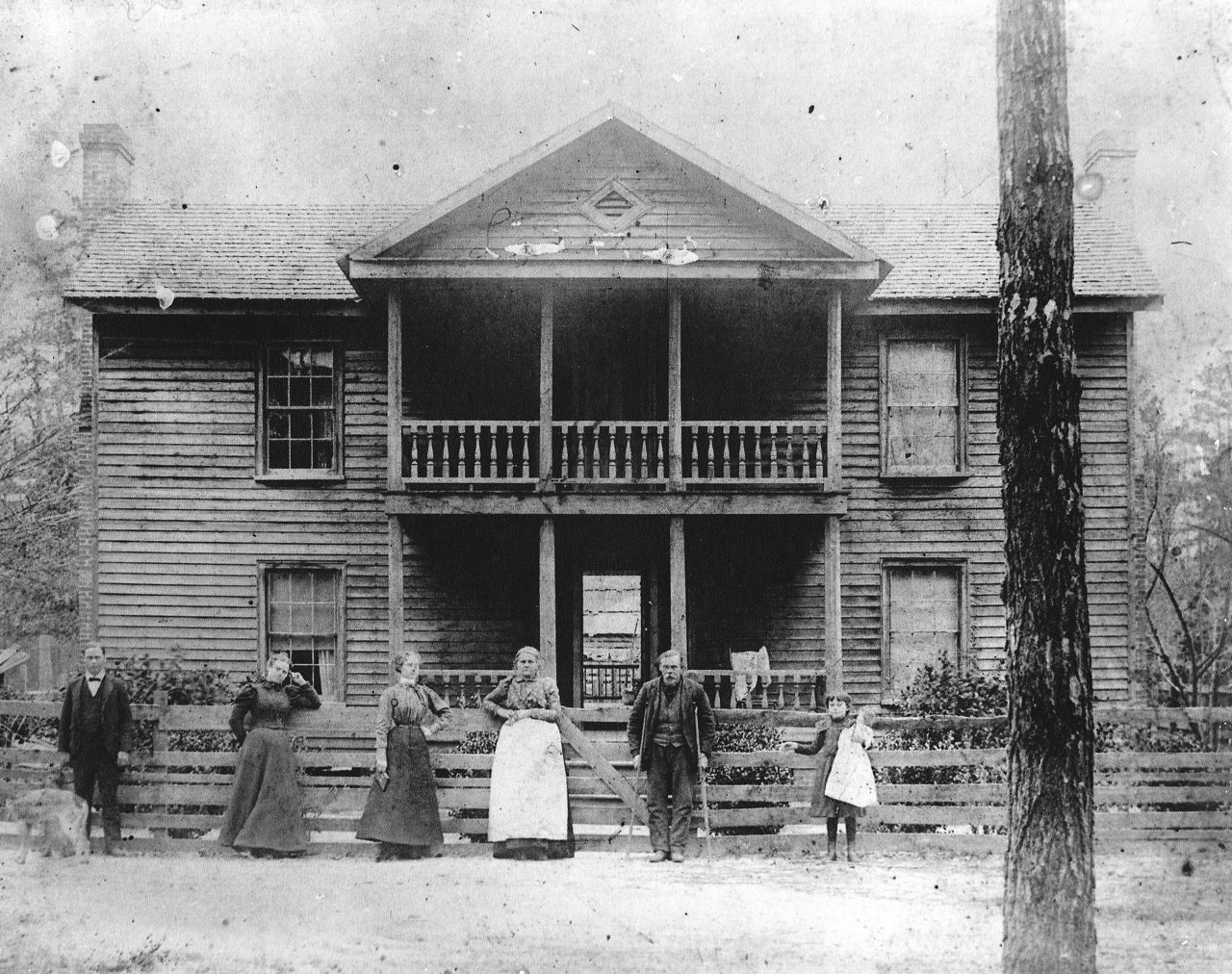 Of course we're finding lots of amazing things, too. Here, for example, is a photo of my great-great-great grandparents in front of their home in North Carolina. That's them in the middle -- the woman with the white apron and the man with the crutches. According to notes on the back of the picture by a family historian, the man, William Bullard, served in the Confederate Army from 1862 to 1865 as a lieutenant. This photo was taken around the turn of the century, and shortly after Bullard died in 1908, the house burned down. I guess those all-wood structures made of pine were probably tinderboxes. 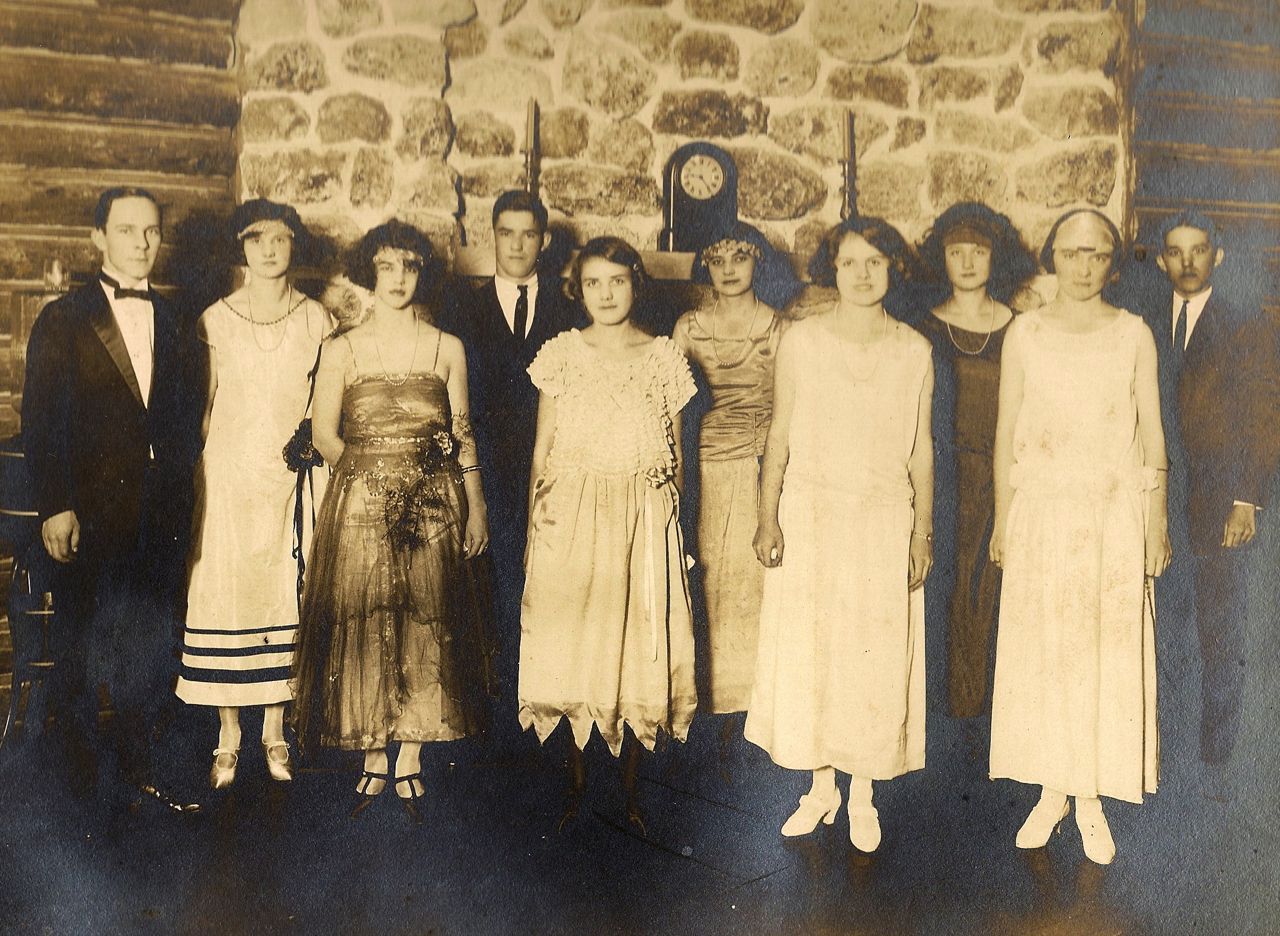 Here's another fun one -- my grandmother's graduating class from Avon Park High School in Florida. Very Great Gatsby, isn't it? My grandmother is on the right in the headband. 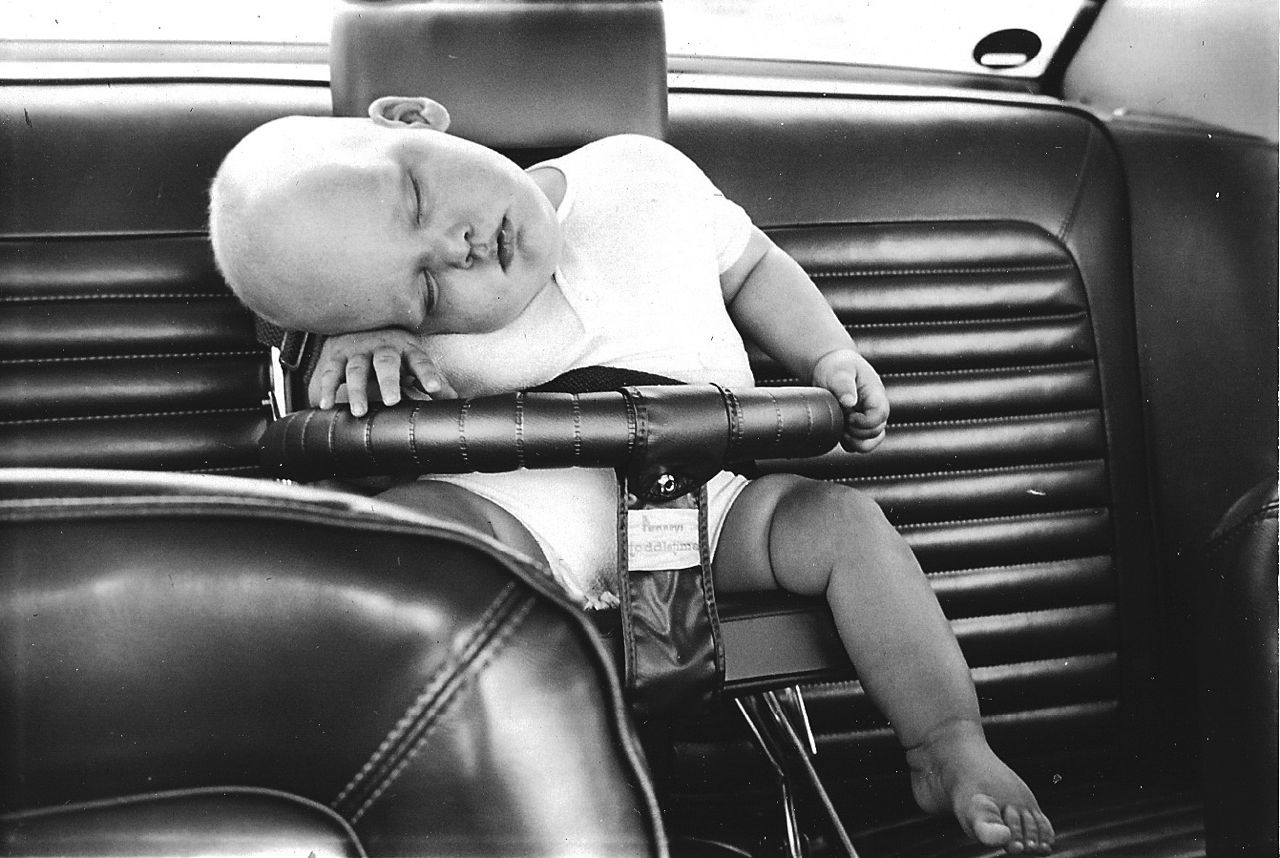 Of course we're keeping the pictures, though we have a bazillion photos of me as a baby. Most of them all look the same -- me lying on a blanket, me sitting in a stroller. I guess when parents have a first child the impulse is just to keep snapping away. About 80 percent of those could be pitched. I like this one, though, of me in a car seat. Who can blame me for being tired, holding that head up all day? 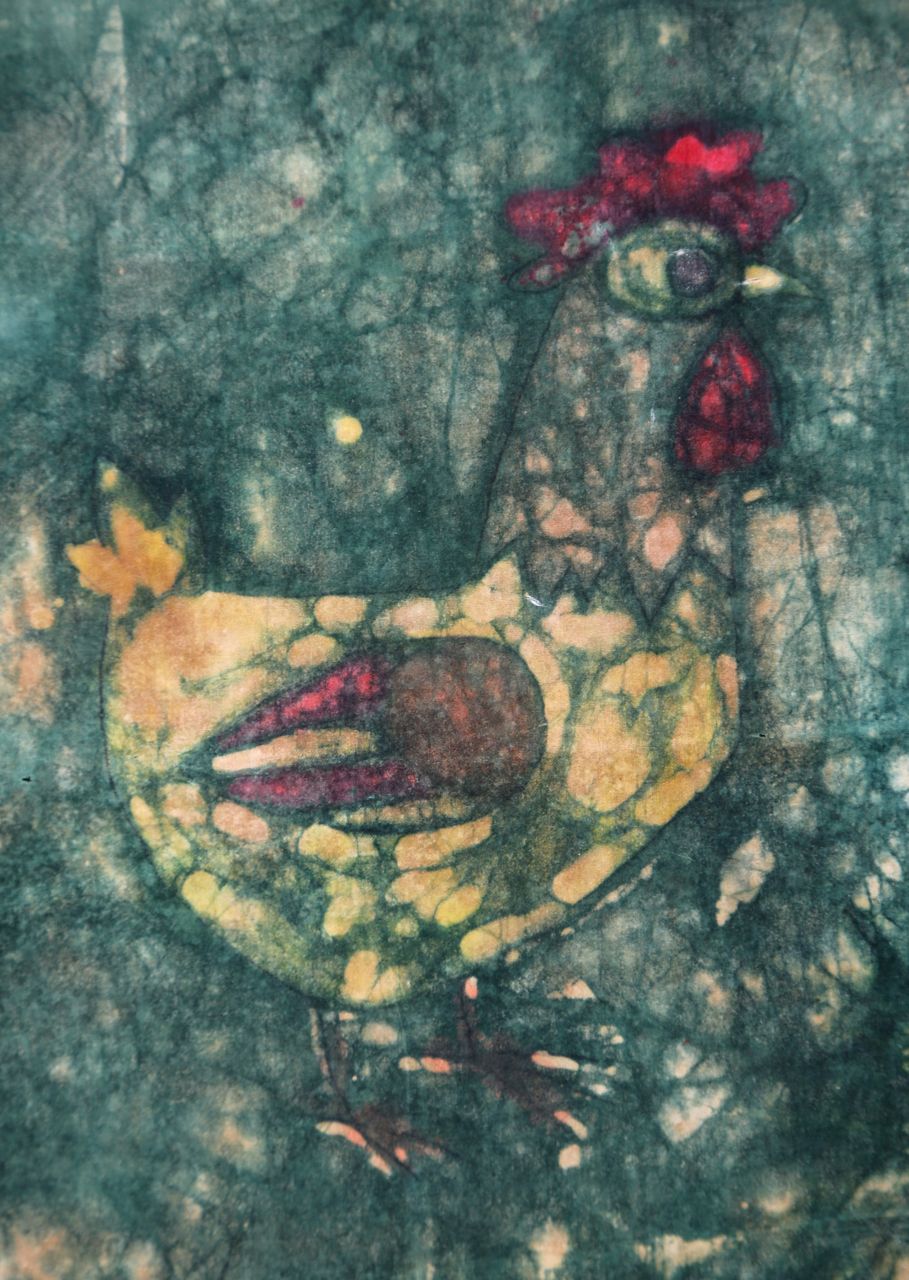 When I was a kid I made this batik as an art project. I believe it was during a summer art camp for kids at the local university, though I can't really remember. The fate of the batik is undecided. 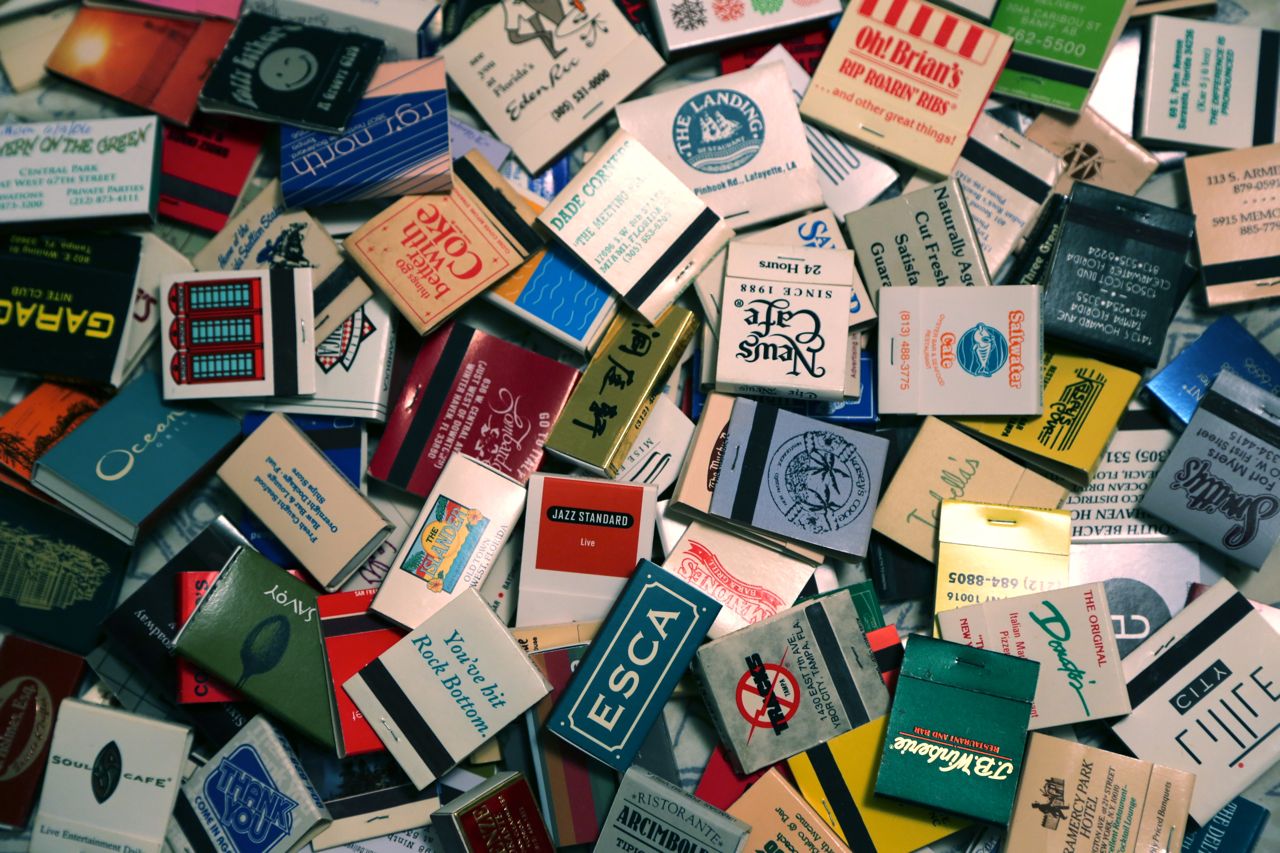 And then there's my matchbook collection. I'm mystified about what to do with these. I'd sort of like to keep them, because I made notes inside the cover of many books, recording who I was with and the date. For example, I went to the The Islander restaurant in Key West with my friends Kevin and Suzanne on Nov. 11, 1989. I don't remember a thing about it. (Do I need matchbooks from meals I don't even remember?)

But I'm pretty sure flying with matches is verboten these days, so I'd have to strip them out of the books, and I'm undecided about whether it's worth the effort. Maybe a picture should suffice.
Posted by Steve Reed at 10:59 AM

Pictures like that of your G-G-G etcetera grandfather make you wonder about the occasion (delightful, by the way). Like why was graduation such a dreary event? Why does everyone look so glum!
And as for the matchbooks - Tear off the front cover, get a frame and sandwich them between two pieces of glass, creating something to hang, or perhaps a tray. That way you could see what you've written on them.

I love the symmetrical spacing between the folk in photo 2

Btw I was a big matchbox collector!

You were a little punkin head, weren't you? Precious baby Steve.
I hate stuff. I hate it. I'd throw those matches away. Done.
The history will always be there, remembered or not. The matches will not bring it back to life.
That's where I'm at these days.

I love the family photos and your art project...and I do remember you saving matchbooks. It is amazing the ephemera we collect...

Can you send me an email when you get a minute? Lost your email somehow. Thanks.

Love that photo of your confederate ancestor - especially the giant doll the girl is holding! And LOL at the virgin acrylic - I have some old acrylic yarn that says that too :)

In my favorite antique shop there is a bowl full of old match books, Two dollars apiece. People love them for all sorts of reasons. That little baby suit is adorable as is that kid with the enormo
brain! hahahaa.Family photos are one of those things that one can NEVER toss, unless everyone has died...Glad you are having an interesting time!

There is probably a market on e-bay for the match books. It is amazing how obsessed some people can be to get just the item that is missing from their collection. Investigate before discarding or tearing off the matches. Also a niece or nephew may really get into the Family tree in the future and adore all those photos.

Marty: Apparently a photographer was visiting town -- someone they knew from the Spanish-American War. (!) He took the photo. As for everyone being glum at graduation, that seems to be the norm in old photos, doesn't it? People didn't get into smiling until later. (When dental care was better!)

John: It IS a very thoughtfully-composed photo! Matchbooks are fun. I hate to see them go, but sadly it's my only option.

Ms Moon: You're right. It's just stuff, and I remember the meals even without the matches.

Bug: Isn't that funny? The girl is my great-great aunt.

Linda Sue: Two DOLLARS apiece??? Am I sitting on a gold mine here?

JennieB: I probably could sell them, but in the grand scheme of things they're not worth it. I don't have THAT many, and I wrote inside many of them. I looked into the rules regarding carrying them on a plane or mailing them, but neither is an option. I'm probably going to just toss them.

I'm with ms moon, except for photos. I keep pretty much all photos. Maybe you can donate the matchbooks to an antique dealer. To my mind the fact that you've written on them dates and people you done with makes them even more valuable.

I can't believe you have that matchbook collection. So do I! I've been wondering what to do with it too. Right now I keep it in a very tall glass vase that sits in my dining room. Maybe I should take some photos and get rid of them all. After all, most restaurants don't have matchbooks any longer.

Hi, new to your blog. :) Visiting by way of Ms. Moon's page.
I love old photos. Yours are wonderful.
Hey, my kids and grands have some big heads... for big brains, I guess?