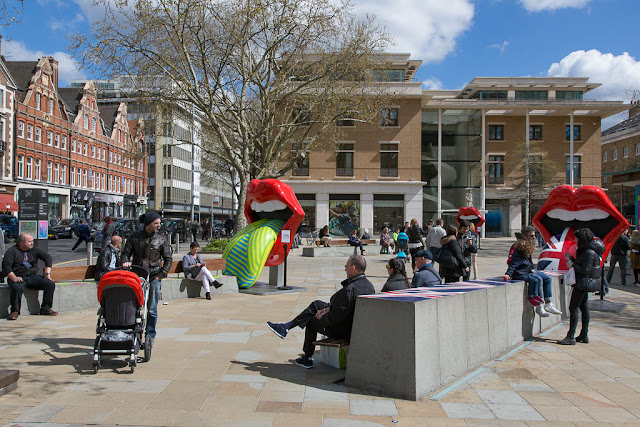 Since late last year I've occasionally been peppered with little e-mail prompts from fellow blogger Ms. Moon, reminding me that a Rolling Stones exhibit was due to open this month at the Saatchi Gallery in London. (Any of you who are familiar with Ms. Moon's blog will know she is a fan of the Stones, and particularly of Keith Richards.) "I can't help but want you to go and tell me all about it," she said.

I vowed to go over the weekend. I got a bit worried when I tried to get tickets on Saturday, and found the exhibit -- called "Exhibitionism" -- sold out all day. It was like trying to get tickets to a concert! (OK, maybe not quite that competitive.) Finally I snagged one for first thing Sunday morning.

I have to preface this post by admitting that I am not a huge Rolling Stones fan myself. I can't pass myself off as an expert. I mean, I get why they're a hugely influential and successful band. I don't doubt their artistry for one second. They're just not quite my sound. I have exactly four Rolling Stones songs on my iPod: "Paint it Black," "Sympathy for the Devil," "Waiting on a Friend" and "Memory Motel." (The latter because I once visited the motel in Montauk that allegedly inspired it.)

So as I write about the show, keep in mind that I don't have the perspective of a true aficionado. 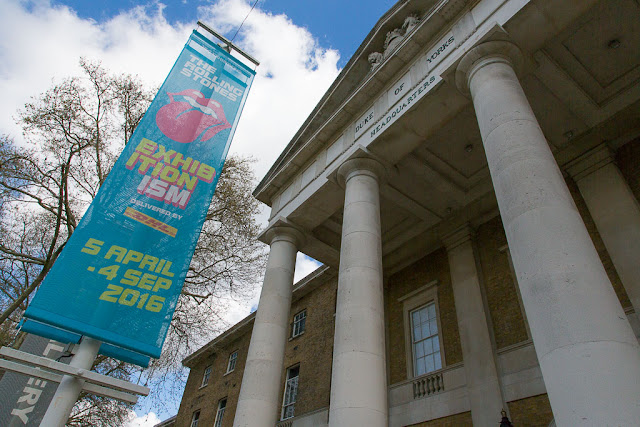 Having said that, the exhibit was fascinating -- and HUGE! It's taken up the entire two-story Saatchi Gallery, which is not a small space, and features items such as handwritten song lyrics, original costumes, stage designs for the band's tours, album artwork, tape boxes and log books from recording sessions, and dozens of musical instruments (like the Gibson guitar Mick Jagger used to co-write "Sympathy for the Devil" and "You Can't Always Get What You Want," and Keith's Fenders, which he praises for their versatility).

There's a room that reproduces a recording studio, and visitors can "mix" Stones songs to elevate or diminish the different tracks. I reduced "Angie" down to just Mick's voice, for example, effectively hearing it a cappella -- and then reduced it just to Keith's guitar. Pretty cool!

There's a gallery that reproduces the atmosphere backstage at a concert. There are loads of photos and tour posters, a section on Stones-themed movies and various video presentations. There's the barber chair Mick uses when he gets made up before a show. There's a section on musicians who have worked with the Stones over the years, like Billy Preston. 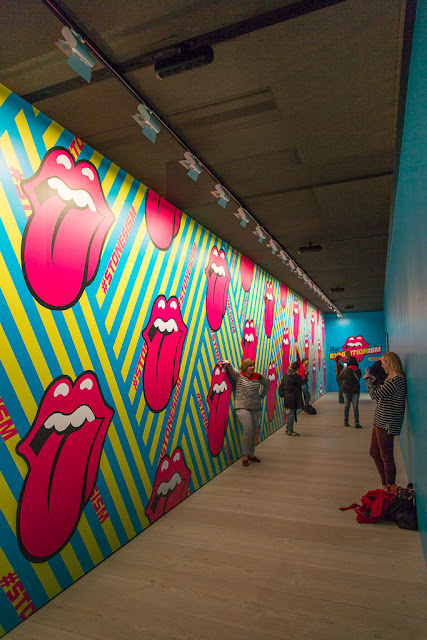 Of course, photography was strictly prohibited, so you're not seeing pictures of any of this. And for that I apologize. I certainly would have taken them if I'd been able. The only "photo zone" seemed to be this hallway, at the exit, where people were snapping selfies against the wildly graphic wall.

(Incidentally, I'd always believed the Stones "mouth" logo was based on Mick's mouth -- but the designer says that's not quite true, at least not consciously. It probably is the best-known rock logo out there, isn't it? Just about anyone on the planet, seeing that mouth, knows to whom it refers.)

The finale of the exhibit is a brief 3-D film of a recent concert performance -- and seeing those guys up there on stage, strutting their stuff and working the crowd, well, it really did bring tears to my eyes. I felt like I was there.

The Stones are one of the foundational elements of our pop culture, aren't they? Other acts come and go, rise and fall on the charts, but these guys have been doing it -- and well -- for longer than I've been alive. And the point was consistently made in the exhibit that they've lasted because they are perfectionists who won't settle for mediocrity. They do it, and do it, and do it again until they're certain they have it right.

I wish I could have channeled all that I saw straight to Ms. Moon's brain, but unfortunately this post, inadequate as it is, will have to do!
Posted by Steve Reed at 6:28 AM