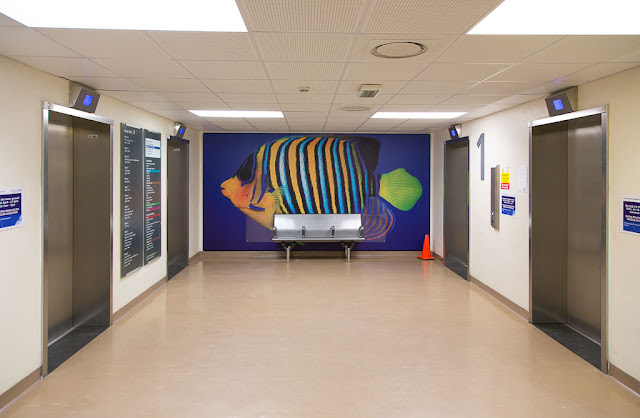 Yesterday, when I said our little family unit had been reunited, I wasn't quite telling the truth. We were briefly reunited after Dave's return on Sunday, but as of Monday, I was once again sleeping with Olga in our bed, next to an empty place where Dave should be. And Dave, well...

...Dave is in the hospital.

Don't worry. We are not in crisis mode. But there are some medical issues that must be dealt with.

Basically, and I'm saying this with Dave's permission, there's an infection and some related issues that may involve Crohn's Disease. These problems have arisen before -- back in 2010, when we lived in New Jersey, he spent a few days in the hospital for similar reasons. (I didn't write about it then, because I was on blogging hiatus, but I took this photo in his room.)

This time around, we spent four hours in the A&E ("Accident and Emergency," which is what the ER is called here) on Monday night, and Dave was admitted. He's getting antibiotics and we're waiting to see what further treatment may be needed.

Yesterday was madness for me. I had my own doctor's appointment in the morning -- the follow-up from my earlier appointment and blood tests, the conclusion being that I am absolutely fine. So there's that, at least.

Then I rejoined Dave and sat with him an hour or two, before going home to gather some stuff for him (like a laptop and some DVDs -- his shared hospital room has no TV), and went to work. I stayed through the afternoon, then went back to the hospital, and stayed until about 9 p.m.

I'll be back today, of course, and back at work, too. Never a dull moment!

(Photo: Hospital elevator lobby. Each floor has a different big photo. Surreal!)
Posted by Steve Reed at 5:48 AM