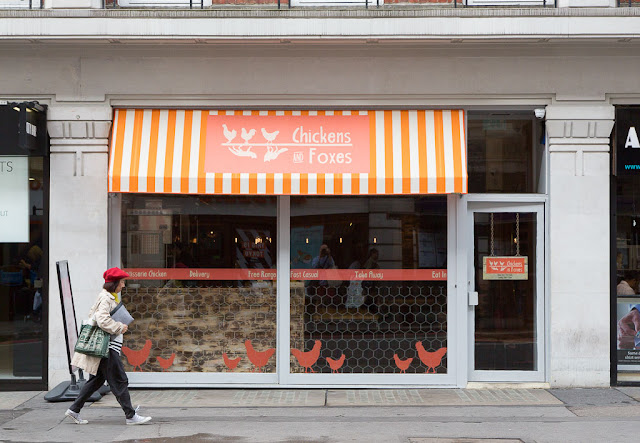 This little restaurant just opened near the Baker Street tube station. I love the name and the window, but I'm a little confused about the relevance of the foxes. If the restaurant is serving up the chickens, are we, as the predators, the foxes?

I realized after I took the picture that I actually know the woman walking past. What are the odds? She's a substitute teacher at the school where I work.

Another day spent mostly at home on the couch, which is not entirely a bad thing, I must say. This cold is still pretty mild but I haven't really felt like getting out and doing much. Still, I complained to Dave about feeling trapped inside, and he responded by getting tickets to hear the London Philharmonic perform Sibelius No. 5 -- one of my favorites -- last night. What a husband! We also heard an incredible percussion piece performed by Dame Evelyn Glennie, whose lively and precise style is doubly amazing given that she has been profoundly deaf since childhood. She performs barefoot to feel the vibrations of the orchestra behind her. Mind-blowing! 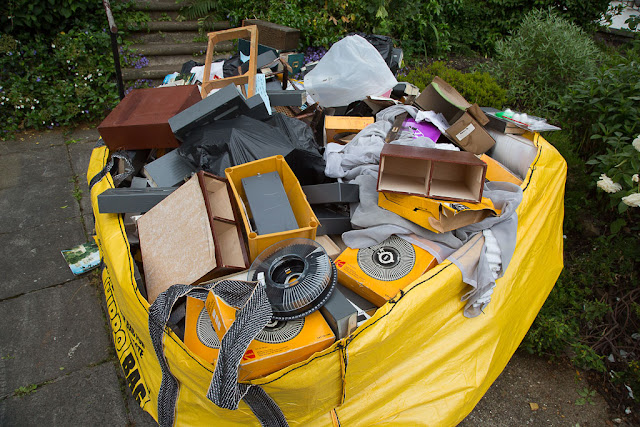 This gigantic bag of trash is sitting in front of a house down the street. Do you see all those photographic slides? There are thousands of them -- not to mention old books and notebooks and other stuff, all being discarded. I confess I looked through some of the slides to see if there were any interesting ones. Many appeared to be images of old Victorian-era cartoons and artworks -- looks like research for someone's dissertation, maybe.

I did pick up a little box of 40 slides that seem to be original photos. I'm having them scanned. As a photographer I just can't stand the idea of original photos being tossed out in the trash. Dave is a bit appalled by this, and I'm aware of the ethical considerations, especially given that I have lamented the likelihood that my own private materials will wind up in the trash one day. But after all, there are books based on found photographs and found journals, and I looked long enough at the slides I grabbed to know that they're not hugely private. I don't think they even show any people.

I'll share some of them with you if they're any good.

In any case, the contents of that immense trash bag were dampened by rain only hours later, and we've had lots more rainfall since. By now, everything else there is beyond rescuing.
Posted by Steve Reed at 7:17 AM