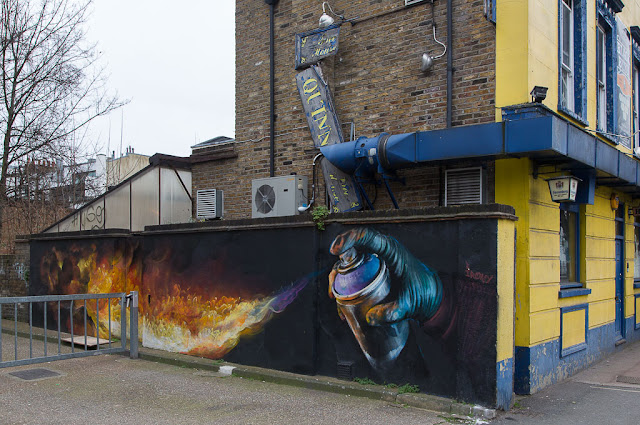 Last Wednesday, when Dave and I took a taxi to get to St. Pancras train station for our trip to Broadstairs, we passed through Camden Town and saw lots of great street art. I realized it had been quite a while since I went walking in that area.

So yesterday I set out on what I intended to be a brief meander. The sky was gray, which is actually ideal for photographing street art -- you don't get distracting shadows on the walls. One of the murals I visited was this flaming spray can piece (above) by Irony. 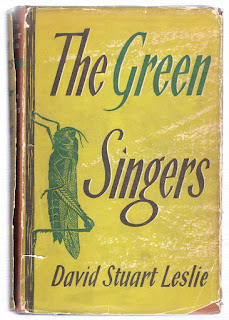 I normally avoid the area around Camden Market because it's tourist hell and the sidewalks are packed. There are always various costumed characters (yesterday I saw The Mad Hatter) wandering around, looking to make a pound or two. But what makes the area so obnoxious to walk through can also make it fun if you're in the mood for that sort of thing.

So I walked for an hour or two through Camden and into Primrose Hill, where I became distracted by a secondary mission. I happened upon a bookshop with a bin of used books outside, and when I browsed through them I came across this volume (left). I love that cover -- those '50s graphics! "The Green Singers," from 1958, is set in Australia, and I had to have it -- and it was only £3! But of course I didn't have any cash on me, and I didn't want to try to make such a minor purchase with a debit card. (I may be wrong, but the shop didn't seem like the kind of place where they'd go for that.) So I schlepped through Primrose Hill and back to Camden Road to find an ATM, and then back to the bookshop.

In the end, success -- and I also got a second old book (right, below, just £2). I've never heard of either of these authors, but I liked the old-fashioned dust jackets so much. Apparently David Leslie wrote numerous books including some with homoerotic elements. (Score!) And Ralph Arnold's "Hands Across the Water," from 1947, is about trying to find a newly incarnated Tibetan lama in England. 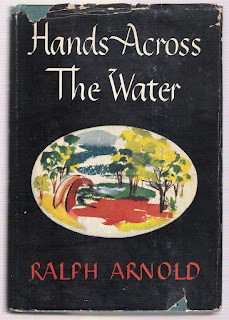 So, who knows -- they might be rubbish. But maybe one of them will be another H. E. Bates -- an author I'd never heard of before I took the plunge on some thrift store books that I turned out to really like! I'll report back.

I walked from Primrose Hill up to Adelaide Road and caught the C11 bus for home. By this time it was past noon -- nothing like a good morning of urban exploration.

Dave and I spent the afternoon in the garden, continuing to prune and prepare for the new growing season. Yesterday I mentioned the crocuses coming up around town, and we found a few in our own flower beds. We also filled three lawn bags with leaves and trimmings. It's amazing how much debris a garden can accumulate.

Last night we went on a "Gogglebox" TV bender. Dave reheated his Sauce Bolognese, but added tomatoes to make it a more traditional red sauce. He was not impressed with his low-tomato-content initial attempt!

And apropos of nothing, here's the word of the day: "broigus." I saw it used in a headline in the Jewish News, which I happened to pick up for free on the high street yesterday morning. (See page 12.) Apparently it's a yiddish word meaning a fight -- in this case, between air passengers mid-flight! It's a great word -- I think I could find room for it in my vocabulary.
Posted by Steve Reed at 6:55 AM