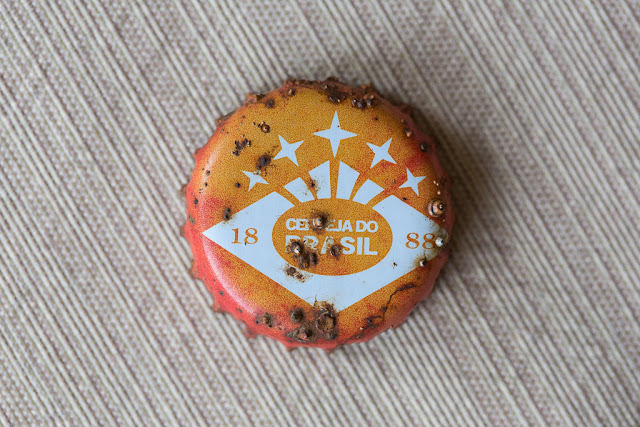 Yesterday morning, I got out the instruction booklet and assembled my new metal detector (quite easily, surprisingly). And then I grabbed a trowel and I went out into the garden and detected for a couple of hours.

You'd be amazed how much stuff is out there. But when I say "stuff," what I really mean is "junk." Unidentifiable bits of rusty iron, broken metal piping, nails. My prize find was this bottle cap, which was about two inches below the sod and apparently isn't that old. (It's for a Brazilian beer called Brahma, just FYI.)

You can tell the detector what you're looking for -- jewelry, coins, or "all metals" (which to me sounds like a nightmare of old screws and aluminum pull tabs). I set it for coins and it went off many times. I narrowed my search to the strongest signals and eventually dug three holes, based on the detector's report that something resembling a coin was 6-8 inches below the soil surface. I did not find any coins.

Don't worry! I'm not giving up! But I did tell Dave that I was going to think twice about digging any more than a few inches down, because you know, that's just too much work. I want my Saxon gold and Roman denarii to be lying right under the grass. Is that too much to ask?

Then I spent the afternoon working on photo archiving and negative scanning -- an apparently endless process. I was looking for several specific shots, and I found all but one of them, plus some others I'd forgotten about. Time for another old photo post!
Posted by Steve Reed at 6:27 AM

So you are now officially a detectorist! I wish you the best of luck in your searching. Go here for further guidance:-
http://www.thedetectorist.co.uk/metal-detecting/

Yorkshire's advice brings you to Step Two of Detectorism: forming a club (or society) for the purpose of meeting up with other detectorists and comparing equipment, and finding others's tools wanting.

I do hope you find something Roman or Tudor. It seems that England is stuffed with bits of wonderful history. My favorite thing in the British Museum is the Sutton Hoo Hoarde. You're off to a great start with that Brazilian bottle cap. It's pretty, and for such a teeny thing,it's full of information as I suspect that the year 1888 means something to a Brazilian.

Do you remember when a man and his son knocked on my door one day and asked if they could search my yard with their metal detecters? They were so excited when I said yes and so disappointed when they found nothing of interest and barely anything at all. I think you have to just enjoy the search with the added possibility of finding something great.
Also, I love that link Mr. Pudding gave you. It's so...British.

the only thing I found of interest in all my years of gardening at the old city house was old marbles. I had quite a nice collection of them in a jar on the window sill above the kitchen sink and then one weekend, while we were at the country house, they disappeared. My grandson had wanted them and while I had bought him several bags of marbles, I told him he couldn't have those. I suspect that he let himself into the house with his mother's keys and took them although he denied it and I have never seen them since.

I don't have that many photos but my collection needs some major work. Well, maybe this winter...

This post reminds me that all the detectorists I have ever seen have been at the beach. I don't think I've ever seen one in a park or yard. It looks like a fun way to discover the history under our feet. Looking forward to your photos!

From what I have read about metal detectors and their operators, they find a lot of junk but rarely anything valuable. But you may have better luck in England with its Roman history.

It sounds like fun to go searching for buried treasure.

It is common here to take fill from some places to dump at building sites to fill in low areas, etc. And sometimes it comes from old dump sites, believe it or not, with a thin layer of topsoil to plant a lawn. So even if people find stuff it's not necessarily original to that site. Our house had fill added and the kids and I found numerous marbles, bits of glass and pottery over the years. I wonder what we would have found with a metal detector!

Good luck and happy hunting! I can just see your lawn full of divots after a morning's digging :)

Have fun with your new machine. Digging small holes may also aerate your garden soil.
I hope you will find some buried treasure.

That sounds like a gadget I would enjoy playing with. However, I don't like to dig, so that's a problem. Hmmm...