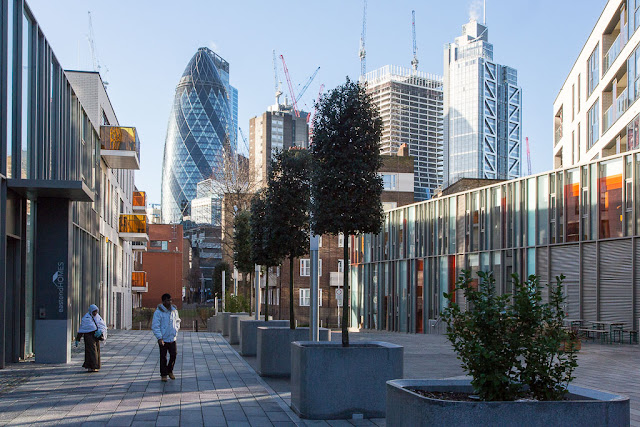 I've been getting the craziest spam e-mails lately, on behalf of right-wing causes. Anti-abortion, anti-gun control, you name it -- they've all been hitting my inbox. They seem to come from an outfit in Colorado. How I wound up on this mailing list is a mystery to me, but I noticed the e-mails began shortly after I visited the "crazy news" WND web site one day. (I look at crazy right-wing web sites now and then just to see what falsehoods and conspiracies are being reported.) I didn't give my e-mail address to WND but I wonder if they could harvest it somehow, using cookies on my computer? Or maybe even that is a conspiracy theory. Maybe a "friend" signed me up to be funny. Anyway, I've been unsubscribing from the e-mails -- talk about barking up the wrong tree!

Speaking of right-wingers, isn't it delicious to see Trump and Bannon sparring with each other? It's like a playground skirmish between two half-wit bullies. This administration will destroy itself -- it's only a matter of time. Whether they take us along is an open question.

Some of you mentioned yesterday, in response to my musings about the origins of Brussels sprouts, that they are descended from the same ancestral plants as broccoli and some other leafy greens. I looked it up to get some clarification and you're absolutely right. In fact, Brussels sprouts, broccoli, cauliflower, cabbages, collards, kale and kohlrabi are all cultivars of a single species, Brassica oleracea, or wild cabbage. In the same way that a single canine species has been cross-bred to become everything from pugs to greyhounds to Staffordshire terriers, Brassica oleracea has been hybridized into all those familiar vegetables.

Which is pretty darn amazing.

See how much you can learn from blogging? 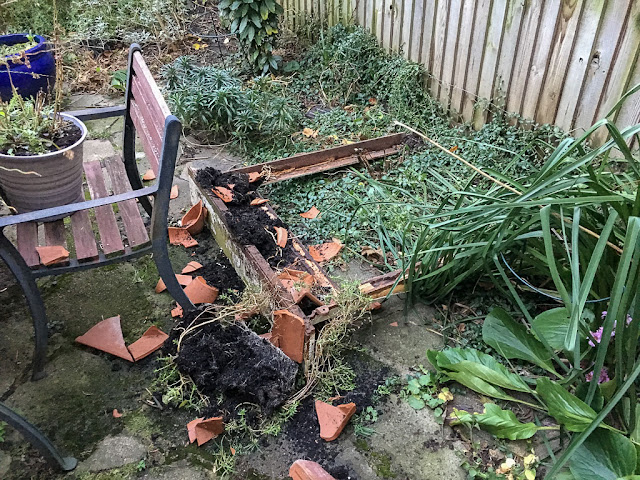 Here's a photo of our damage from Storm Eleanor the other night. That heavy iron mantelpiece had been leaning against the wooden fence for years, but the fence moved so much in Eleanor's high winds that the mantel (and all our plants atop it) crashed to the ground. I lifted it back up -- I bet that thing weighs 125 pounds -- but I haven't cleaned up the rest yet. I'll get another pot on the way home today. Maybe we can save a few of those skylovers. (The nasturtiums were done anyway.)

Now Eleanor has moved on to continental Europe, where she is apparently wreaking havoc. And I know everyone in the eastern United States is having a crazy "weather bomb" experience. But there's no global warming, y'all -- my e-mail tells me so.

(Top photo: Between Brick Lane and the Tower of London, last Sunday morning.)
Posted by Steve Reed at 6:46 AM

I'm catching up here on your posts -- hadn't heard of your storm but feel like I live on another planet even from the east coast!

So glad to hear that the spam e-mails I arranged to be sent in your direction have created so much mirth. I just knew you would find them entertaining.Have a nice day.

I’d never heard of a bomb cyclone before but that what they’re calling our snow event. Doesnt it seem sometimes that the whole world is off tilt?

The best part about "Fire and fury" is knowing that der Drumpf won't be able to resist it. He'll be sounding out the words while he shovels the Big Macs, and ask General Kelly to help him with the big words such as "imbecile" and "treasonous". And his kids (the ones he had with Ivana) will have all that on their permanent record, there for all the future generations to see. Yea, I say unto you, the name Drumpf will forever be tarnished and will glitter like fake gold no more.

A girl can dream.

Commenting here from sunny Florida where it's 27 degrees and there are still tiny patches of snow/ice from Tuesday in the shadiest parts of the yard. And I hear they're about to start massive offshore drilling because Fart Head doesn't give a shit about the oceans and neither do his Republican minions.
Just be glad they're only harvesting your cookies and not your organs.
I'm a little bitter this morning. Sorry.

It was bound to happen sooner or later. Can't wait to see how this fight ends up. Pretty sure it will Bannon this round.

The storms we get now are brutal and we see destruction like never before.

Crazy times in every way from the insanity in the White House to the weather everywhere else. Sometimes I wonder what normal even looks like anymore. Is it gone forever? I have no idea. I just wish things would calm down a bit.

I like being in that part of London on a Sunday. It's so quiet! I've been getting some very strange emails too! They don't seem right-wing they appear to be people trying to unsubscribe from some mail list. The thing that gets me is that I can't see my email address in the mail list at all so I can't figure out why I'm getting them. I just move them to junk and go on.

In addition . . our daily newspaper had a cartoon of Drump and Rocket Man in adjoining cribs arguing about the relative sizes of their buttons.

Some days there are such riches to choose from when writing a post, aren't there? :)

I saw Brussels sprouts on the stalk for the first time about a year ago. I was aghast. All that plant, and THIS is the only part we can eat? I've heard they are very good roasted, but haven't tried them that way. I'm afraid of being disappointed, like I was when we tried corn on the cob on the barbecue after hearing people rave about it. Blech! If I want barbecue flavour I'll buy BBQ chips, thank you! ha ha How do you usually cook them?

The weather bomb reached us yesterday but mostly as wind. That was more than enough for me. I held my breath a few times when the howling got too high-pitched. The east coast of the USA really got nailed, though. It's too bad about your plants and the pots. A good excuse to get new ones?

I’m unsurprised that all of those veggies came from one plant. - the only one on the list that I like is broccoli. Ha!

I’ve been in a stupor every day from starting my new job. It’s SO COLD here in NC - 9 degrees on my first day of work. Insanity.