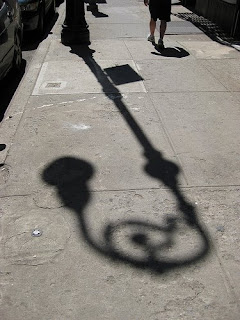 I saw Jane Fonda last night on Broadway in “33 Variations.” She plays a musicologist who travels to Bonn to study Beethoven’s manuscripts, in hopes of unlocking his motivation for writing 33 variations of a lesser composer’s simple waltz.

The play was interesting -- I know little about Beethoven but the basics, so it was mostly new to me. My motivation for attending was Jane.

I suspect that a person’s feelings about Jane Fonda say a lot about their Red State/Blue State proclivities. Having grown up in the ‘70s, in a household headed by a feminist-leaning mother (also named Jane), I always admired her. She was the model strong, savvy woman, and I liked many of her movies: “The China Syndrome,” “On Golden Pond,” “California Suite,” "Nine to Five," “Barefoot in the Park” and of course, “Klute.”

(Funny story: When I was 10, I went with my church youth group to “California Suite.” It’s a Neil Simon movie, but it has some mature themes: Walter Matthau wakes up with an unconscious hooker in his bed, and Maggie Smith is married to a gay but closeted Michael Caine! I can only imagine the blood draining from the faces of the youth group’s leaders as all that unfolded on screen.)

I never understood, particularly as a kid, why some people considered Jane’s activities in Vietnam to be so treacherous. It seems to me that reaching across the gap in a conflict and trying to meet and understand the enemy might be a good first step toward conflict resolution. But then, I don’t come from a military background, and those folks saw her behavior very differently. I believe even she has acknowledged she went too far in antagonizing people back home, but I think we have to view her actions through the lens of the radical politics of that period.

Anyway, it was exciting to see Jane in person last night. She looks great. All those years of the Jane Fonda Workout clearly did her body good. And she sounds just as she always did -- it was wonderful and comforting to hear her distinctive diction and voice. (Almost like “Coming Home”!)

Hey, I had a telephone conversation with her a dozen or so years ago. Top that! :-p

I love Jane Fonda. One of my favorite exercise tapes was a workout by her with some of the greatest classical music in the background.

Ah Jane. Though I admire her, my perspective is a little bit different. She always conformed herself to be the perfect woman for whatever man she was with, which is why she went through so many personal transformations.

She starred in Barbarella was during her marriage to Roger Vadim. Later when she suddenly became a poltical activist, she was involved with Tom Hayden. She became a workout and fitness fanatic and a Nice Lady when she married Ted Turner.

Now that she's no longer married, I hope she can find a personna that isn't about the man she's with, but is all about her.

K: No way! You gotta tell me that story sometime! :)

B: You would indeed have liked this play. It included a real pianist on stage as part of the performance. Pretty great.

Reya: You're right. She has definitely been through several metamorphoses in her life. I guess the "Tom Hayden" Jane is the one I most identify with. Even if it was more a public perception than a truth, I suspect that was closest to her real identity...though I still need to read her book and find out what she says about all that.

I was going to see this a few weeks ago but am waiting until everyone I said I would see it WITH is available. Of course this means that I will never see it.

I've never been able to generate much emotion about Jane's Vietnam activities. I do think she allowed her idealism to be used by the North Vietnamese, to their advantage.

what a great outing....I've long admired jane and she never has shied away from taking risks

I can't believe the ferocity of some folks hatred of her - to this day - I mean let it go, people!!

Klute is a great film