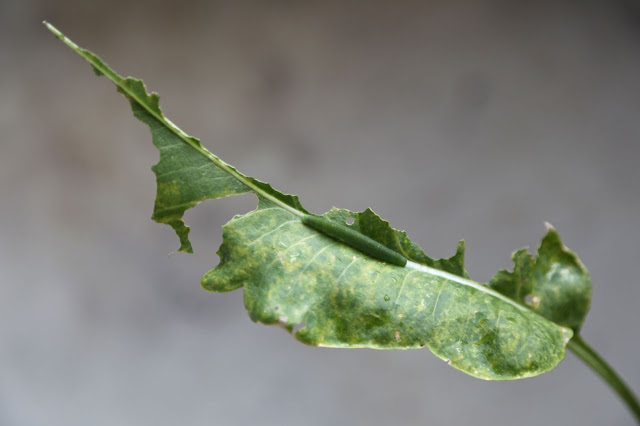 This is one of the creatures that's demolishing our horseradish plant. Could it be an offspring of the Cabbage White butterfly that I saw almost two weeks ago? If so, it grew really fast! It's the only caterpillar I can see on the plant, but as you can tell, it's going to town.

It may be the lone survivor, partly because I decided to intervene and kill off some of the eggs laid by the butterfly. The day after I watched it lay those eggs, I plucked many of them off with tweezers, which wasn't easy because they were incredibly tiny. I left some behind, too, but the poor plant just isn't very big and couldn't have sustained all those caterpillars if they'd all hatched. Call me a caterpillar murderer. I tried to walk the Middle Path.

(Besides, the Cabbage White came back later and laid some more. I left those alone. It was like fighting Niagara.)

We'll see what happens to this guy (and his siblings, if there are any). With the weather getting chilly, I can't imagine he'll have much more time to grow before he needs to crawl into the ground -- or wherever -- and pupate, or hibernate, or a combination of the two.
Posted by Steve Reed at 5:54 AM