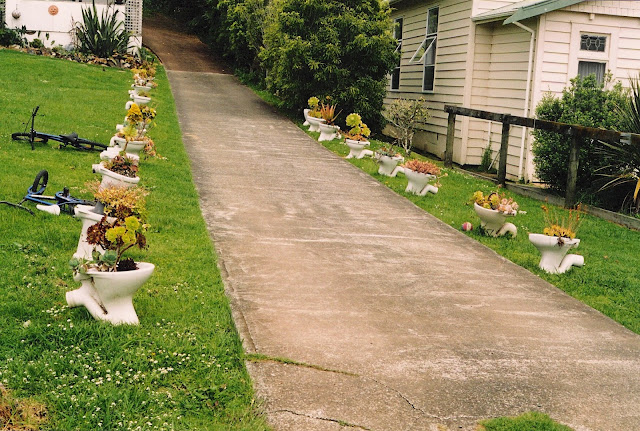 My photo-scanning efforts recently turned to New Zealand, and a trip I took there with my mom in 2004. New Zealand, as you might expect given its remoteness, is an unusual place. Not only is it swarming with wildlife seen nowhere else on the planet, it's also just a little strange. In a good way.

The toilet photo above was taken in a tiny town on the North Island's Atlantic coast. I wrote "Palm Beach" on the back of the photo, but I don't remember visiting Palm Beach -- which is on an offshore island -- so I'm unsure where it was.

These dog and sheep buildings are in Tirau, in the interior of the North Island. I saw them while driving, and pulled over so fast that I bashed the hubcap of our rental car against the curb! Fortunately, the car company didn't dock me for it. Maybe they're used to tourists having those kinds of reactions. 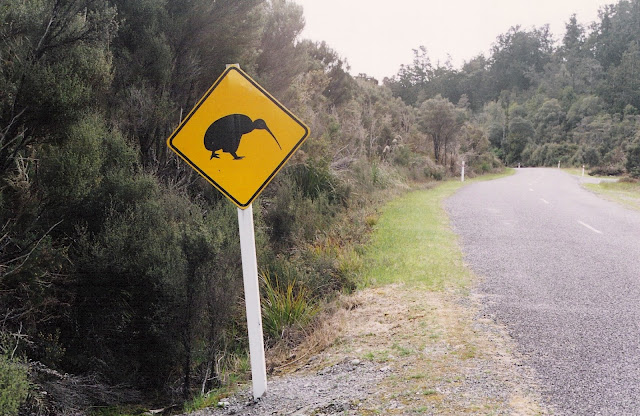 An unusual wildlife crossing, somewhere on the South Island's west coast. We didn't see any actual kiwi birds, at least not in the wild, but New Zealanders take them -- and their preservation -- very seriously.

And finally, in and around Queenstown on the South Island, Mom and I kept finding huge sculptures of New Zealand's flightless birds. They became a kind of running joke. 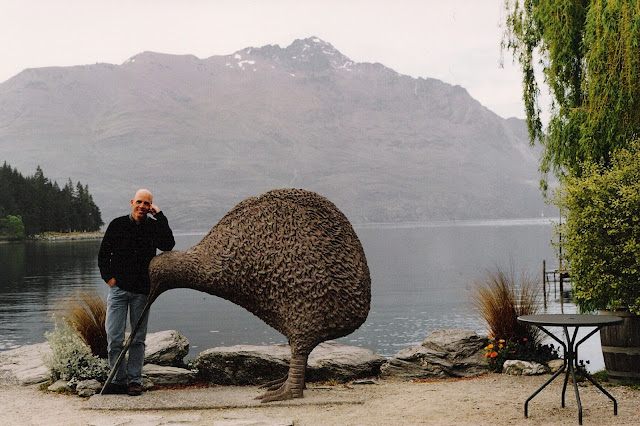 I love the way my mom framed this photo. Apparently she liked that empty patio table as much as me or the kiwi! 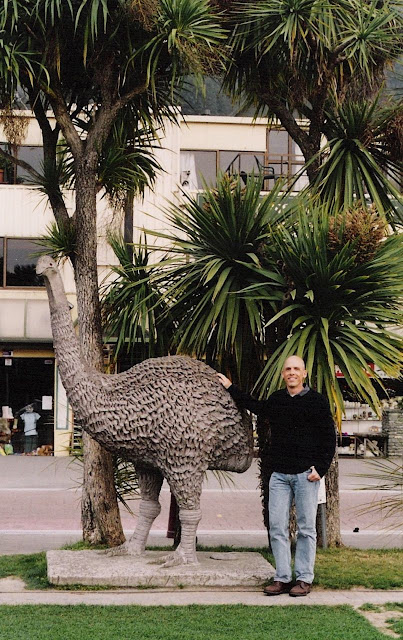 Here's an emu -- I think? And we have one more photo of me with a huge sculpture of a takahe, a kind of flightless pigeon once thought extinct.

I loved New Zealand -- its remoteness, its small-town vibe. I think I could live there, but then again, it might be one of those places that's better to visit. It is a long way from everything.
Posted by Steve Reed at 6:23 AM

Have you ever heard David Sedaris talk about his trip down under with his partner, Hugh? I've never laughed so hard in my life. And that photo of the toilets and your deadpan words made me laugh aloud --

Well, at least they do have plenty of toilets. Obviously.
New Zealand fascinates me. Thanks for the great pictures!

A new girl at work grew up in New Zealand and she fascinates me both with her accent and stories - I really want to visit!

Well you know I love the sheep building - I'll have to be sure to share it with Mike :)

I think your mom was trying to get some of those trees in the picture - heh.

Elizabeth: I've heard a lot of Sedaris but I never heard that bit. I wonder if it's on YouTube?

Ms Moon: I guess that person surely must be a plumber? Who else has a profusion of used toilets?

Wayne: Definitely visit! It's worth every penny and long hour on a plane.

Bug: Who knows. My mom is not known for her photographic eye.

I would love to go to New Zealand. About as far away as I ever get though is Mexico.