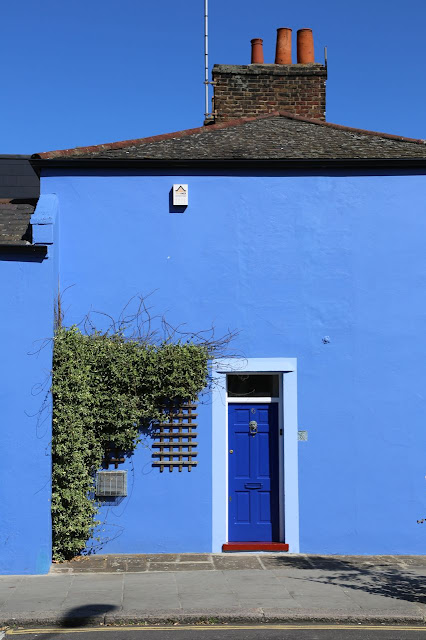 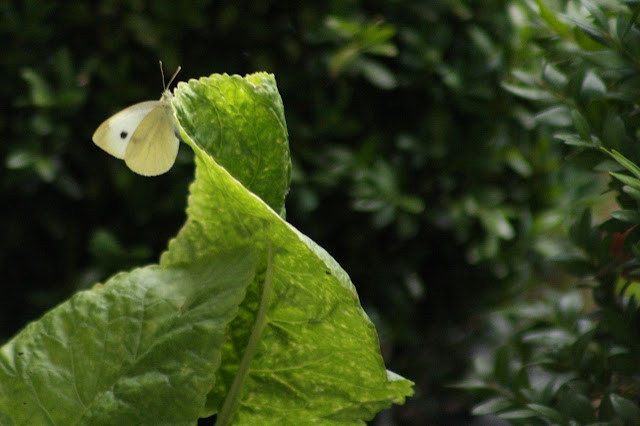 Love it -- maybe a little blasting with water?

BLUE! Love that photo! Was this taken lately? Looks more like a house in Mexico than London with that bright color.

I think I have those pesty little butterflies at my house too! They've been flitting around for the past few days and while at Skylands yesterday I saw a bunch there. Maybe you should just let it go and wait to see if anything comes of all those eggs. You can easily pick the little buggers off if they do become caterpillars, right?

I would just pluck off the offending stems and leaves where the eggs are. But that's just me. Or maybe I'd totally ignore the whole thing. It is very, very hard to get a good shot of a butterfly, isn't it?

That blue picture, like Lynne said, looks so much more Mexican than English. Or Mediterranean. I love it.

That looks like cabbage butterflies we see - thank goodness I HATE cabbage. Ha! And yes, those particular ones are the dickens to get a picture of.

Oh oh oh I LOVE the blue picture! So lovely...

These photos SEND me! Rapture!!! I also had a butterfly land on the sill by my Mom's photo and die there in such a lovely way- I can't help but think magically about it.

Ok, first, that blue house is almost the exact color of the sky on that day. Stunning. What are the odds.

Second, ummm well I would hate to kill the eggs. Caterpillars and butterflies are bird food. I would hate for you to disrupt the ecosystem. LOL j/k but if they hatch and start eating the horseradish just get rid of the caterpillars.

I don't know. It will be interesting to see how it all develops.

it would be pestilential, right? I'd be just as likely to let it be considering I didn't have any cabbages.

I'll tell you all how I handled the butterfly spawn in a blog post in a day or two. I started to write it out here but it just takes too long to explain!

Thanks for the comments re. the blue photo -- it was amazing how the sky and the house were virtually the same shade.

Fine photography with a good read. The format works well on a phone too. First time I've read the Joni quote. Chiaroscuro rocks! Best wishes to you Steve.