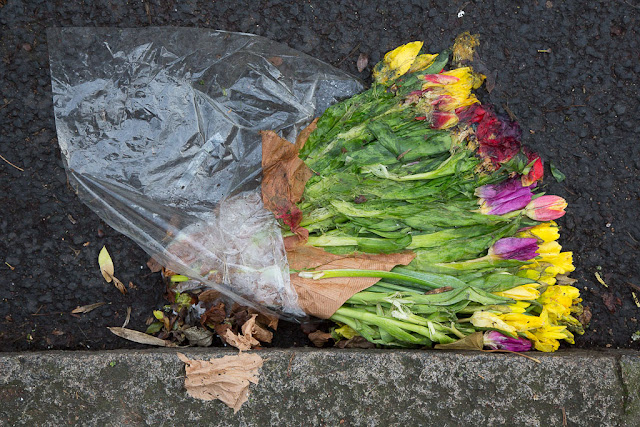 While walking a few days ago, Olga and I came upon this crushed but colorful bouquet of tulips and daffodils lying in the gutter. Of course I didn't have my camera.

So on the way to work, about a half-hour later, I passed by once again, camera in hand -- and realized the minute I tried to turn it on that I'd left the battery at home in the charger. So I had to go back home, get the battery, pass back by the bouquet and snap some photos -- and of course by that time I was late for work.

I just want you to know how much effort went into that picture.

When I looked at it later I realized that some of those flowers, the unopened daffodils lying closest to the curb, appeared salvageable. So the next morning Olga and I walked by again, and I figured if the bouquet was still there I'd take it home. But it wasn't, so maybe someone else had the same idea. 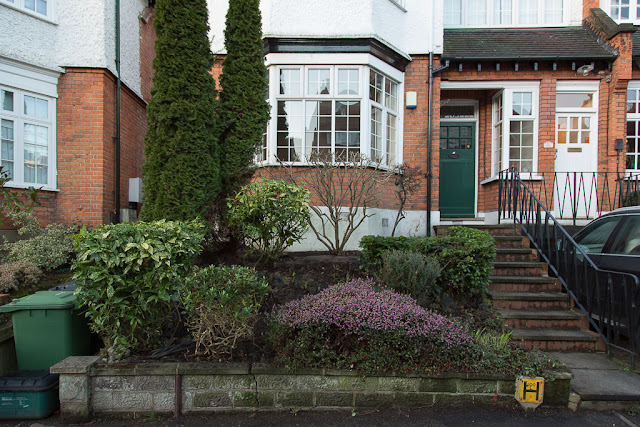 I'm a little late posting today because I wanted to include this photo. Our landlord sent a gardener yesterday morning, who removed our gigantic toppled bush and also pruned the hell out of the rest of the landscaping in the front. (Before photos here.)

I tried to have a chat with the gardener, but he was an older guy (Eastern European, maybe?) who didn't seem to speak much English, so I just let him do his thing. In the end, he cut a little more than I would have -- but things still look better than they did. And it's like a new haircut -- in a few weeks or months it will grow in a bit and look more natural.

I'm so relieved to have that bush out of there.

He did not touch the cypresses. Turns out we're in a conservation area, so those can't be pruned without special permission -- I suppose because they're trees. I told the managing agent I'm fine with leaving them the way they are and that in my opinion, Mrs. Kravitz can mind her own business!
Posted by Steve Reed at 8:35 AM

I wonder what finally happened to those poor flowers?? And, wow, did the front get a pruning...it looks much more tended!

looks like he cut all the green off a couple of shrubs in the back. kind of severe but room to grow.

You could entitle that photo, "Someone Is Pissed!"
I think the front yard looks lovely. And yes, as spring comes along, it will grow out and be even lovelier.

Such a poignant image. Star-crossed lovers? A spurned apology? And then you go and spoil it by trying to salvage the daffs!

Well,that does spruce things up. It pays to stir things up.

Love the shot of the bouquet - well worth you being late to work, in my opinion :)

Those flowers looks so sad. I can't imagine why they would be in the gutter like that unless they fell from a truck or bicycle without being noticed.
The front of your place looks very nice.

Someone really did not appreciate those flowers! Your front garden looks so much nicer and it will soften with growth and time.

The landlord got his money's worth from the pruning :) Actually, I think it looks pretty good, and it will get full quickly in the spring.

Beautiful home! I too think someone was awfully let down...

All that back and forth over a bunch of half-dead flowers.

The gardener did get into the pruning didn't he? However I don't think Mrs Kravitz is going to be happy about the cypress!!