My Own Ode to a Haggis 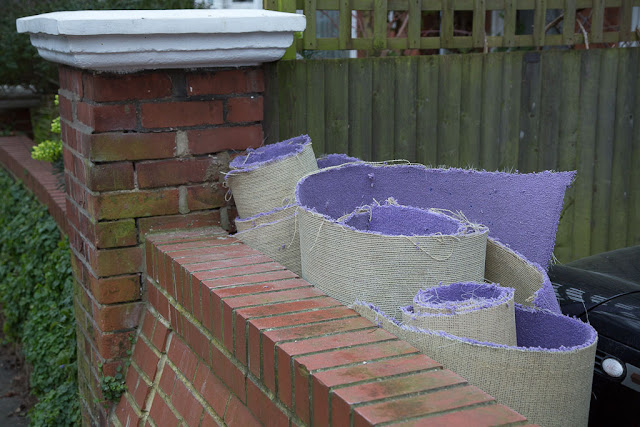 I forgot to mention Burns Night! January 25 was the birthday of Scottish bard Robert Burns, and we did celebrate -- with a haggis! Dave went and bought one from our posh local butcher. It came in a tight plastic wrap, round and plump like a little grouse.

Haggis, according to Wikipedia, is "a savoury pudding containing sheep's pluck (heart, liver and lungs); minced with onion, oatmeal, suet, spices, and salt, mixed with stock, traditionally encased in the animal's stomach."

As you can imagine, with my vegetarian tendencies, haggis has not been high on my list of things to try. But I did -- one bite. It is almost ridiculously rich, and very dark, with the soft texture of organ meat (though the grain gives it a bit of body). I can now officially say that I do not like it.

Dave, however, is a fan, and he's been working through it. Last night he had it for dinner with a fried egg on top. It is a very dense food. A little haggis goes a long way.

To properly mark Burns Night, we should have read Burns' "Address to a Haggis," but we didn't take things that far. (Though I would have enjoyed the poem much more than the haggis itself.) We should also have served whiskey, which perhaps would have made the haggis more palatable.

Speaking of eating animals, did you see the news about the cow that escaped from a slaughterhouse in New York City a few days ago? It wandered through the urban streets of Queens for a while before finally being corralled  by the police. They returned it to the owner, but it was subsequently taken in by an animal rescue organization and will live a life of leisure. I was glad the cow's courage was rewarded.

I also read a fascinating article and study yesterday about common household insects -- specifically which bugs are most common in American homes. A team of entomologists surveyed 50 houses around Raleigh, North Carolina, and catalogued the insects they found. The diversity was wider than you might expect! I can only imagine what we've got living with us here -- definitely spiders, flies and occasionally moths, because I see them. And I'm sure there's all manner of critters we don't see.

Finally, we finished "Making a Murderer" on Netflix last night. I won't give anything away, but I recommend the series. It will definitely make you question the fairness of the American justice system, particularly as it serves the poor and uneducated. We were aghast at the decisions made in the case, by juries, attorneys and judges -- but it does help to do some research on the side to find out more about the trial and evidence presented. I accept the fact that we didn't see or hear everything and thus may not know the full story.

(Photo: Some discarded carpeting on our street. Wouldn't you like to see the room that came from?!)
Posted by Steve Reed at 7:16 AM

I'm about 90 pages in -- I like it so far but wish I had more time for sustained reading!

Don't let that carpet go to waste! You should have gathered it ready to make some homemade kilts for next year's Burns Night. By the way, in most Scottish fish and chip shops you can order a haggis supper - haggis with chips (french fries to you).

Oh, The Making of a Murderer! We binged on that over one weekend. It had me totally hooked. It does make you question things for sure, but I know we don't know the whole story. They are going to do a follow-up on the ID channel this coming weekend with "never seen before footage" and facts that were left out of the Netflix series. Good watching for sure.

I had a friend when I was a child whose entire room was lavender. That rolled up, ripped up carpet made me think of that.
Kathleen used to go to a Burn's night gathering every year and the haggis was supposedly brought in with flaming torches or bagpipes or something. Much whiskey WAS served. They also had a vegetarian haggis option. That was probably brought in with no fanfare at all.

My children love haggis. We never expected them to, but we served it up to them last week and they asked for more. I don't mind it either. My husband, being Scottish, imports it for himself.

You are much braver (is that the right word) than I am. You would never get even one bite of haggis past my lips. Love that carpeting.

I would lose so much weight if I had that carpet in my house, Nauseous all the time!You are very brave to try that really bad pudding...euwww! Haggis eaters must be desperately hungry. That the so called justice system is so broken here is pretty much common knowledge. Having served on jury for a "murder" I know first hand, money and loads of it, matters!

When I think of haggis, I think of the one "date night" per year that my parents used to have. Nova Scotia is a pretty Scottish province and Robbie Burns night is done up properly here. My experience eating haggis was like yours, though - one bite was enough. Or more than enough :)

The carpet is a beautiful shade - for anything but carpet, that is!

In our household we are very ANTI eating sheep parts (as you might imagine - ha!). And I'm increasingly feeling the call of being a non meat eater. Just today I had a (really delicious) frozen meal with fire grilled steak. The box talked about their hormone & antibiotic free beef. With a picture of a cow on the box. Sigh.

When was 13 I would have LOVED that carpet!

I can go my whole life without trying haggis thankyouverymuch. and pffft on NC bugs. they should do that down here on the gulf coast plains.