You may remember that the sidewalks are being re-paved in our neighborhood (resulting in the destruction of the volunteer hellebore). Well, a few days ago I spotted some small poppy seedlings growing in a crack beneath a neighbor's garden wall. They'd obviously spread there naturally, and yesterday morning, while walking Olga, I gently extracted a few of them to save them from the pavers. I brought them home and potted them -- two of the five wilted because I didn't get enough root, but the others seem to be holding their own for now. We'll see whether they survive!

We had purple poppies in our front garden last year that appeared all by themselves. This year, I don't see a trace of them. The shrubbery has filled in and less sun is hitting the ground, and poppies like sun. Since those guys may not come back, I hope these new seedlings make it.

(They were growing in the sidewalk in front of the home of some of our famous neighbors. Dave joked that I was stealing celebrity poppies -- he threatened to commit the act to video -- but I think if they're just random volunteer seedlings growing in the cracks of a public sidewalk they're fair game, don't you? Especially when they're doomed to death by re-paving? I wasn't taking them out of the neighbors' garden.) 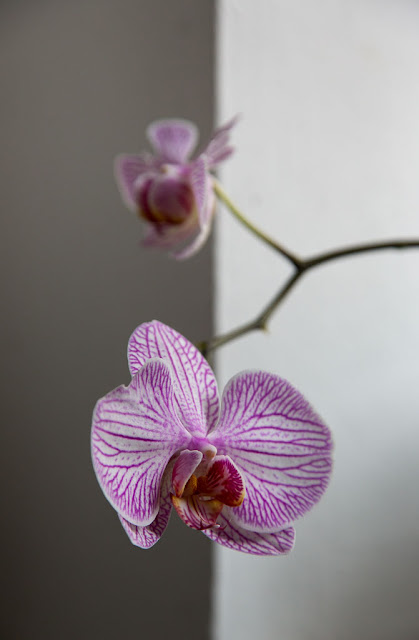 Meanwhile, our rescued orchid -- the one that produced a single malformed flower several weeks ago -- has opened a second bud. This one seems normal.

I know all this must seem incredibly inconsequential (and slightly insane) when the United States is about to go to war with Russia, Syria, North Korea and God knows who else -- but you know, I just have to deal with things on my own level. I can't stop North Korea, but I can save plants.

We spent yesterday here at home, walking Olga up to Fortune Green and around the cemetery. Also, I finally booked my flight to Florida for July, direct to Jacksonville. I'm committed!

(Top photo: A sunny sky, jet trail and building under construction, seen from our street.)
Posted by Steve Reed at 6:45 AM

"It's Tuesday. It's seven thirty so it's time for Plant Rescue with your hosts Steve Reed and Dave Cauliflower..." (cue canned applause)
STEVE (smiling) Hi folks! You ever walk down a pavement (not sidewalk) and see random plants growing wild in the cracks?
DAVE Sure thing Steve. I see it all the time.
STEVE Well today we are gonna show you how to perform a successful pavement plant rescue.
DAVE Yeah. All you need is a crowbar, an old spoon and a plastic bag containing wet cottonwool.
etc.

I'd almost bet that right now gardening as an activity is up, worldwide. I think that a lot of humans, when stressed by the threat of great unrest turn to the dirt and growing things in it.

seems like we are all doing the same things to cope. the powers that be want to wreck everything so we little people do our best to nurture it. too bad you didn't collect the purple poppy seeds from last year.

My question is what DID you use to extract those poppy seedlings? I'd never have on me anything remotely useful for digging up plants! And I doubt you carry either a crowbar or an old spoon per YP's comment :)

There is nothing to be done in the face of uncertainty except live as best we can -- find beauty where we can and be as useful as we can.

You might not be able to save the world but you are wonderful at saving plants. I say go for it. I love the name celebrity poppy.
I'm betting you didn't book that flight on United!

I love love love poppies - so glad you rescued some! And I second Sharon's comment - hope you didn't book United!

Well, you do your own thing planting poppies. As for Trump? He gets scarier everyday. someday he'll accidentally start a fight.

i walked into the kitchen last weekend and said to my husband, who had been watching the news, "So what's going on in the world?" He said, "We are about to start a nuclear war, and I'm not even kidding." And I continued making my sandwich. I swear, I can't take it in.