All About My DNA

Remember how Dave and I took the Ancestry DNA tests? Well the results are in! Mine didn't contain any surprises -- as I suspected, I am about as British as can be -- but I was surprised by the specificity with which the test could analyze my background. And Dave got a little surprise from his.

As you can see, 90 percent of my DNA comes from Great Britain, Ireland, Scandinavia (probably Vikings) and Western Europe (Saxons and Normans, no doubt). The other 10 percent is divided among "low confidence regions" -- which I assume means the amounts of DNA I carry from those areas are so small that the results are suspect. They include single-digit percentages from the Iberian Peninsula and Finland/Russia, and traces of less than one percent from Eastern Europe, Italy/Greece and Africa (dating back to the time of Lucy, I'm guessing, although the test pinpoints West Africa, which seems curious).

I'd thought it possible that I might have some Native American DNA, considering that both my Mom's and Dad's families have been in North America for centuries. But I have zero. And apparently there was no canoodling with servants of other backgrounds -- at least not within several hundred years, and not that resulted in a child leading to me. 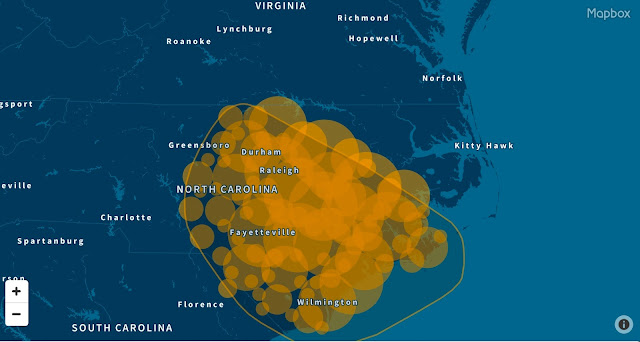 What IS interesting is that the test linked me to "genetic communities" of Ancestry DNA members in Eastern North Carolina. This is completely, utterly accurate -- my maternal grandmother's ancestors are from this very region. (She was born near Fayetteville.) It's not surprising that I would share DNA with people from that area. 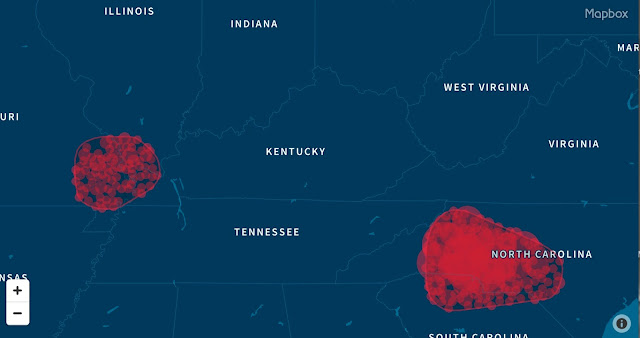 It also linked me to "genetic communities" in western North Carolina and along the Illinois/Missouri border. (Interesting that these separate areas share common DNA!) Again, this makes sense. My father's family moved from the Carolinas/Tennessee to the Arkansas Ozarks many generations ago, and he himself was born in St. Louis, and had family there.

I am fascinated that even though I took the test here in the UK, my DNA is specific enough that it pinpoints my American roots!

Dave's DNA, on the other hand, is much less British. His ancestry is 32 percent Western European (probably German -- he has a German surname), 29 percent Scandinavian, 27 percent Eastern European, 6 percent European Jewish (!) and "low confidence" traces from elsewhere in Europe and West Asia. The Jewish thing is a cool surprise -- his parents are devout Lutherans! His "genetic communities" include Eastern Europeans (his Mom has Czech ancestry) and Germans in the USA's Midwest -- again, completely accurate, given his roots in Michigan.

All in all, pretty fascinating!
Posted by Steve Reed at 6:23 AM

As you say, fascinating.

Yes. Fascinating. When you sent off your DNA did you in any way reveal that you are an American? Amazing that they were able to pinpoint your North Carolina connection.

YP: No, I don't recall indicating that I am American. The test found that all on its own. Same with Dave and his midwestern ties.

Sooo interesting. I think we'd all like to find out about our backgrounds. Judging by my grandfather's profile, which my mother always described as the Indian head on the nickel, I've always suspected we have some native American in us.

Fascinating! Which test did you use as I know there are more than one out there. Rick's mom got one but I think it was just a bunch of printed paperwork. Yours is so much clearer!

Neat that the accuracy of the test is confirmed by the history we know of our family!

my sister sent off for that so since we share the same parents I'm sure my results would be the same. we are about as white as it gets. I don't remember the percentages right off hand but...57% English, Scottish, Irish, Welsh; 32% German and French; 8% Scandinavian (Denmark, Norway, Sweden); 2% European Jewish (Poland, Belarus, Ukraine, Russia, Hungary, Israel); and 1% Finland. Family legends said some Native American but that proved to not be true. The genetic communities thing is interesting. I don't know if my sister's test included that, I'll have to ask.

That is very cool! I would love to have this done on my father...no one knows where his family came from before the 1880. I suspect they emigrated from England or Scotland, but the geneology records just aren't there.

This is so interesting. It's amazing how you can confirm the results from things you know about your family history without revealing that information to the researchers. Now I want to do it.

How cool! I would love to have this done but it's not a priority in the finances :)

It's fascinating stuff but not surprising. the big surprises come when there's an unforeseen issue.

Mine wasn't very surprising either - except that I was CONVINCED that there was some African-American ancestry, based on my grandmother's looks. Nope - mostly European. I need to go back & look at it again - I've forgotten all my percentages.

Funny- I was wondering if you're more Brit than YP is and now it turns out that you're more so than John Gray is.
My brother had his done and yeah, we're like the whitest people in the world which didn't surprise me but upset me nonetheless.

I am new to your blog. I have enjoyed reading back through it. As I was reading about some of your ancestors being from certain genetic communities in the US I was thinking that it sounded just like the records of my Mom's ancestors. After I finished reading this post, I went back up to the top of your blog site and discovered that your last name is my Mom's family name.

Hi Susie! Sorry for my delayed response -- I'm just now getting around to reading some comments on my older posts. We did our tests through Ancestry.com. We checked a box that said they could use them for "research purposes" or something like that -- I don't know if that enabled us to get more detailed results or not. There's also an option to link them to your family tree, if you have one. Good luck!