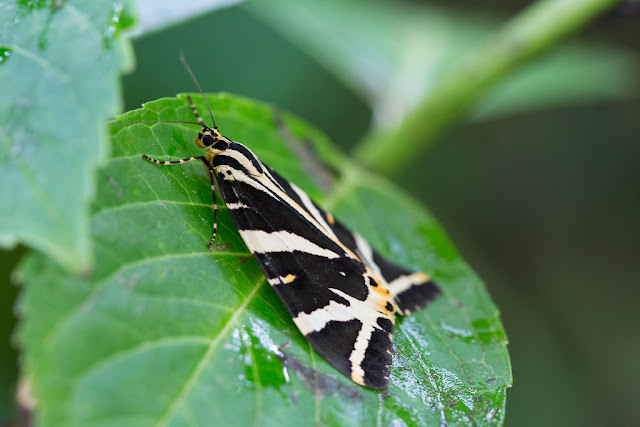 I am not going to talk about Donald Trump or his foul-mouthed, homophobic minions. I've been reading about them all morning and I just can't stand anymore. But I will celebrate the fact that Senate Republicans can't seem to manage to repeal even part of the Affordable Care Act, and I'm going to focus on good news like the rescue of these poor zoo animals from Aleppo.

There are good things going on in the world. I don't know about you, but I have to occasionally remind myself of that. The path of humanity is not being entirely dictated by a man who makes Richard Nixon look dignified. 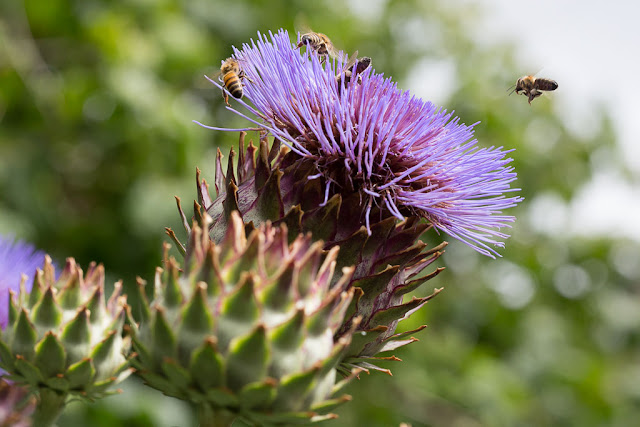 And our cardoon is blooming and attracting bees like nobody's business.

I barely left the house yesterday. I took some stuff to our local charity shop, and I took a bag of used coat-hangers back to the cleaners. I also tried to get the broken strap on Dave's sandals fixed, but the man at the local shoe repair shop said he couldn't do it because he doesn't have a machine to sew leather. So I have to look farther afield to solve that problem.

I've also been on a neighborhood anti-litter campaign. Someone -- and I think I know who -- is dumping bags of bloody meat wrappers on a street corner near our house. I don't believe it's a local business. It's happened over and over, and animals tear the bags open and distribute the contents all over the street. It happened again yesterday morning and I reported it to the council, and it has allegedly been cleaned up, but I am collecting evidence against the perpetrators and I expect to take it to the council at some point. Whether there's any enforcement will be up to them.

I'm also reading a very entertaining book called "The Last Pink Bits," in which author Harry Ritchie travels to a few tiny remote outposts of the British Empire -- places like the Falkland Islands, Gibraltar and St. Helena. He's a funny writer and the book -- even though it's about 20 years old -- is a good antidote to the dreary, frustrating dispatches coming out of the White House these days.
Posted by Steve Reed at 7:14 AM

I like the idea of reading that book - I don't have a problem reading books which are 20 years old. And in spite of the warning in your first sentence, I will just say the wording on the George Washington memorial photo from yesterday seems to hold true all these years later.....

I salute you for addressing that neighbourhood litter problem. Please do everything you can to bring the ignorant perpetrator to justice. I bet his name is Anthony Scaramucci. Wasn't he mentioned in "Bohemian Rhapsody"?

We are in Easrpoint, FL having breakfast at a restaurant which is owned by Mexicans who have made this tiny place their home. The place is thriving and people of all descriptions are here, enjoying the good food. This is America. That's what I think.

I love Ms. Moon's comment and I totally agree! I just read the daily briefing from the NY Times and I see what you mean. It's getting very tiresome!

Trump continues to amaze me. Just when you think he can't do anything dumber he does. Not allowing trans gender people in the armed forces is just one of those incredibly dumb things.

love the picture of the cardoon and the bees. it's depressing what's going on over here. and now Scaramucci and his foul-mouthed tirades. can it get worse? probably. I think we may be seeing the demise of American democracy since the republicans continue to put party over country.

Woke up this morning to the good news that the "trumpcare" skinny bill was voted down. But the ongoing nightmare that is our country at the moment continues. It's pretty mind-blowing, I have to say. It's always good to focus on the awesome earthly beauty around us.

I don't understand a shoe repair place that can't sew leather. What CAN they do to repair shoes? Hmmm...

Im with YP good for you! You will find others will follow

And now Reince Prebus has been fired. The crazy in the White House never stops to rest. I think you have the right idea to turn off the news and take a break from all the turmoil in Washington.

In a way I think the worse the behavior in the White House the better; it will get us to the tipping point where the person in the White House will be removed that much faster. Until then, remember that there are so many good things going on elsewhere that never make the news. I've had to step back at times because the focus in the media is skewed to the bad stuff.

Your pictures and your outlook are two of those good things that are going on elsewhere, by the way.

Glad you are on the case, Can't wait for their photo to show up - doing their worst, bloody meat bags! - Whatever this is that has been going on and on for way too long in DC. needs to STAWP! doubling down looks refreshing now...the insanity !!!