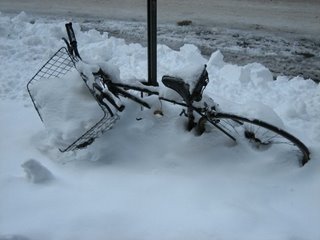 I took this a day or two after our big mid-February blizzard. I was walking home from the subway after being out of town and thought it was kind of amusing that this bike had been buried in the snow.

Problem is, a few weeks later, the bike was still there. It never really moved again, except to dwindle away piece by piece. By June, it looked like this: 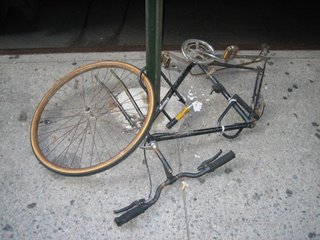 Apparently, I had stumbled onto one of New York's many abandoned bicycles. Rusty and forgotten, they remain locked to signs, bike racks, and other immobile objects for all eternity. Unless someone intervenes.

In mid-July, I decided to do something about this bicycle. I had no idea who to call, so I called 311, the city's all-purpose service line. The helpful but somewhat confused operator eventually decided to report my dead bicycle to the local police precinct as a "quality of life issue." I figured nothing would ever come of it.

But then, on Monday, this is all that was left: 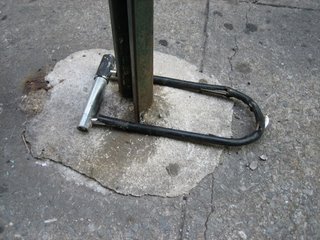 Who says the city isn't responsive? OK, so it might not have been my call that made the difference. But we'll never know, will we?

(For an entire photo gallery of abandoned bicycles, courtesy of Joe Schumacher, click here.)
Posted by Steve Reed at 10:24 AM