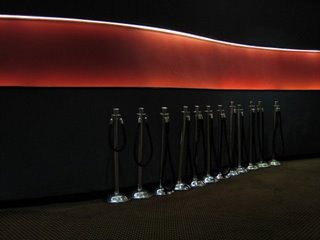 This is an interesting little theater, with original artwork and sculptures on the walls and a distinctly art-house air, despite the mass-market films it now screens. Still, preservationists say it’s a shadow of its former self.

When built in 1962, its then-duplex format was a new style, and it included an original mural, Danish copper light fixtures and a bright blue tiled exterior. Those are gone now, but a few artworks remain.

There have been recurrent reports that the theater is closing, but so far it hasn’t happened. I saw “The Night Listener” there on Saturday. (The theater was more interesting than the movie.)

It seems inevitable that Cinema 1,2&3 will join the Baronet-Coronet, the Sutton and the Beekman, all great old theaters within a radius of a few blocks to be demolished within the last five years.

Click here to see the cinema in its glory days, courtesy of the Friends of the Upper East Side Historic Districts.
Posted by Steve Reed at 10:23 AM