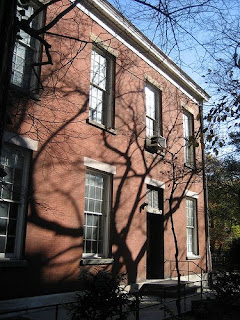 This may seem like a bit of bait-and-switch, given that I promised to return after a week, but I've been giving some serious thought to my blog and I've decided to call it quits. It's been 2 1/2 years, nearly 800 almost-daily entries, and I've met some wonderful people with whom I hope to remain in contact. But I think I've taken this blog about as far as it can go.

I've mentioned before that I've never been entirely comfortable with the blog format. I started the blog to show off my photos, and now that I'm on Flickr, that purpose seems dubious at best. I don't rule out a return to blogging at some point, under a different blog name or identity, but we'll see about that.

Meanwhile, I'll still be in blogland as a reader of the blogs I frequent now, so if you follow that same circle you'll see my comments and you won't be rid of me entirely. (Sadly! :) )

I thank you all for reading Shadows & Light each day. (Or as frequently as you were able!) You can keep up with me on Flickr by clicking the badge to the right. 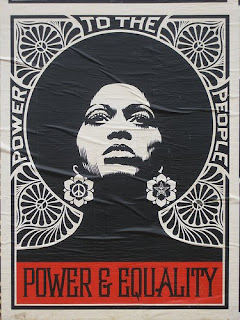 I had a great weekend! I spent Saturday mostly at home, reading and cleaning, and took a little walk over to Chelsea in the evening to price iPods. I've been thinking about getting one, but I didn't take the plunge right away. Part of me thinks it would be fun, and part of me is like, "You've survived 42 years without one -- why do you need one now?"

Sunday I went for a walk in the East Village and went to a coffee house to write in my old paper journal, which I hadn't done for more than a year. It was an interesting experience going back to paper, and being more candid than I am here online. It certainly felt less constrained, and I could think things through a bit more.

In the afternoon I went to MeditateNYC, a gathering of Buddhist teachers from a variety of traditions who talked about different aspects of practice. Very interesting! We had a poetry reading and did a bit of Tai Chi, too.

I'm planning to take a blog break over the next week or so, just to recharge my batteries. See you on the flip side! 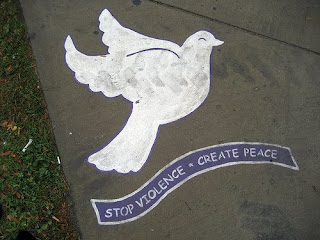 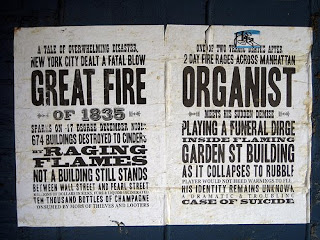 Did any of you see this story yesterday?

Now THAT’s a headline. How could you not read that?

Good headlines are an art form, and they’re surprisingly hard to write. On the Web they’re less restrictive because you don’t have a finite space to fill. But in print they can be tough.

I once won a headline writing competition at a seminar. The story had something to do with a cross-dressing bank robber, and the editors asked everyone in the room to write a headline for the story. We had a specific length to fit, and the key was to provide detail that would make people want to read the article. I was the only one in the room who managed to fit “transvestite” into the headline -- but let’s face it, that’s the key to the story. Otherwise it’s just another bank robbery.

Something must be going on with foxes out there, because I saw another bizarre fox headline yesterday. I think I remember reading that foxes, like raccoons and bats, are one of the animals most likely to be rabid.

And here are two more intriguing headlines I came across in recent months:

Dead son can't be prosecuted for keeping mom in freezer

You gotta read those. Right? 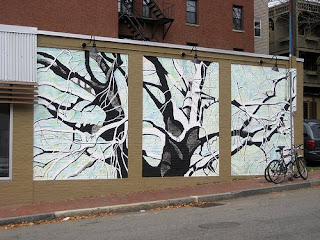 I seem to be getting a cold. I've had a couple of minor respiratory infections this fall -- is this when happens when you get into your 40s? Your immune system goes to hell? Anyway, it's very minor -- just a scratchy throat and fatigue. I skipped the gym and drank up all my orange juice. Unfortunately I have to get to the office, though, because my boss is out and I'm the only person to run the show. Lucky me! 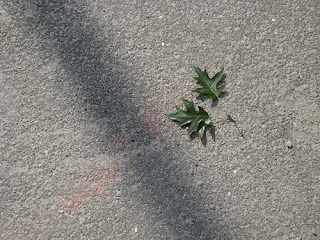 As I write this, at 12:30 a.m., people are literally cheering in the streets. I just watched Obama make his victory speech, and it brought tears to my eyes -- to see his family and Biden's family standing together on that stage, in front of that massive crowd. The country is coming together in historic ways -- ways I wasn't sure I'd ever see -- and the dark cloud of the Bush years is finally lifting. And it's happening ALL AT ONCE!

Earlier tonight, I was so nervous about the election I didn’t want to watch the results. My plan was to go to the movies -- and in fact, I did go see “Nick & Norah’s Infinite Playlist.” (Which, by the way, is a terrific, charming movie. Movies have gone up to $12.50 at my local theater. Holy cow!)

Afterwards, at about 10 p.m., I walked home past bars on Third Avenue where enthusiastic patrons were watching the returns. When I got in, I checked the results on nytimes.com. At that point, Obama had won Pennsylvania and Ohio, so things were looking good. Then, about an hour later, I heard a massive neighborhood cheer and knew something big had happened. I checked cnn.com and saw that they’d declared Obama the winner.

I took another walk down Third, just to be part of the energy and see what everyone was up to. Cabbies were honking, people were yelling Obama’s name and letting out whoops of joy. I popped into a pub and watched McCain’s concession speech from just inside the door. Then I came home and watched Obama live via streaming video on nytimes.com.

I can’t believe this has happened, frankly. As much as everyone predicted it, I thought surely something would derail Obama’s victory. I love this country, and I’m so glad we’re moving forward again. We’ll be able to show our faces in the United Nations and on the world stage, and hopefully we’ll be able to participate in the global community, rather than making unilateral decisions that leave the rest of the world resenting us. The next few years will be no picnic, but now I feel well equipped to see them through.

Good grief. I want to go to bed, but I’m too excited to sleep! 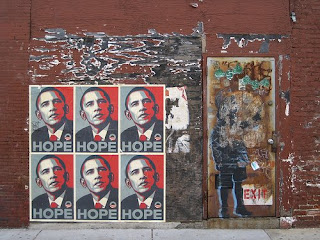 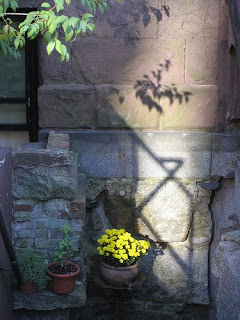 Yesterday was my birthday -- the big 42. It was a nice, low-key day. I went to the Zendo in the morning (an hour early because I forgot to reset my clock!) and then relaxed at home all afternoon. I got some calls from friends and cleaned my floors. Then my friend David, his friend Jimmy and I went to dinner at Montparnasse, one of my favorite restaurants. I came home and watched “The Science of Sleep,” a very bizarre movie starring the very adorable Gael Garcia Bernal.

I like being in my 40s. I feel much more stable, settled and peaceful than I did when I was younger.

I essentially turned off all campaign news over the weekend. 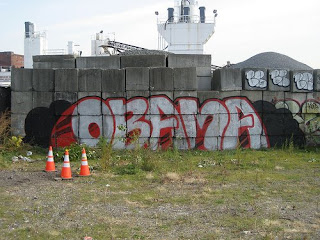 I went walking in Brooklyn yesterday, and when I took the train out there I saw this amazing piece of graffiti from the elevated tracks. When I got off the train, I went looking for the graffiti, and eventually found it, though I had to crawl through a fence to get a good photo.

This is what's different about this presidential election. When in the past have we seen such motivation that people would paint a huge graffiti piece on a candidate's behalf? I'm not seeing John Kerry's name on this wall. (Or John McCain's.)
Posted by Steve Reed at 11:39 AM 7 comments: 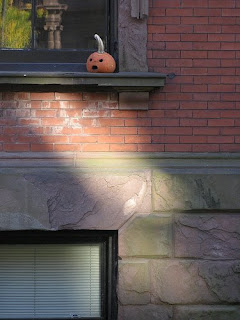 I hope everyone had a happy Halloween! I should have posted this yesterday, but I just had to get that election stuff off my chest.

I didn't do much for Halloween this year. I have a shirt with tiny insects all over it that I wore to work -- vaguely Halloweenish -- and I watched "Shaun of the Dead" last night. There's a huge parade down in Greenwich Village every year, but you can bet I stayed away from that. It sounded like some of my neighbors were having crazy parties.

I didn't get any trick-or-treaters. People don't really do that in New York. For one thing, they couldn't easily get into any of the buildings, including mine!

Halloween has become so strange in the last few decades. It seems to be much more about gore and grossness -- at least in terms of decorating -- and less about ghosts and the supernatural. I think the slasher movies of the late '70s and the '80s transformed our cultural sense of horror, making it less about abstraction and imagination and more about concrete realism.