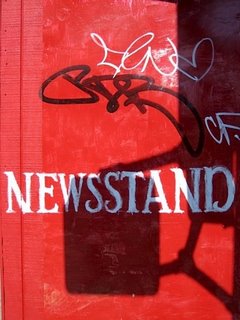 A newsstand on Canal Street, with a nice shadow from a nearby "Don't Walk" sign.

So, let me tell you about my celebrity-heavy weekend! First, on Friday, I went to the Out 100 Awards, which are presented each year by Out Magazine to trendsetters and notable figures of signifigance to the gay community. This year, speakers and recipients included Isaac Mizrahi, Iman, Claire Danes, Anne Hathaway and Michael Kors. The ceremony was held in a huge old bank building on the Bowery with Klieg lights playing across its facade. I felt very Hollywood.

Then, last night, I went to a fascinating talk by author Antonia Fraser, who is touting her new history of the wives and mistresses of Louis XIV. When my friends and I walked in, we passed an attractive woman in black standing near the auditorium door. One of my friends bravely approached her and said, "Excuse me, but has anyone ever told you you look like Judy Collins?" She replied, "Well, that's because I AM Judy Collins." I'm a huge Judy Collins fan, so it was pretty exciting for me - and who would expect that she's a fan of Antonia Fraser? We also saw author Salman Rushdie and playwright Tom Stoppard. (I didn't recognize Stoppard, but Rushdie was unmistakable.)

Pretty fun, huh? And quite a step up from Geraldo Rivera's car.
Posted by Steve Reed at 11:22 AM