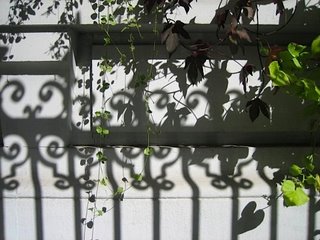 I took this photo just a few weeks ago, yet it already seems like a relic of summer. Those delicate vines surely won't survive much longer, if they're not already gone. We've had a cold snap in the last few days, and yesterday as I walked around town in my denim jacket I was chilly. Maybe it's time to break out the winter coat once again!

I went to see "The Clean House" at Lincoln Center, featuring one of my favorite actresses, Blair Brown. I've liked her ever since her underrated TV series from the late 1980s, "The Days and Nights of Molly Dodd," which was set in New York. I used to watch it as a college student in Florida, longing to live in the big city. She also appeared with Ed Harris in one of my favorite movies, "A Flash of Green," about environmentalism and development in Florida. Anyway, she was reliably great in "The Clean House," a sort of surreal play about cultural clashes and the intersection of comedy and tragedy.

I was at Lincoln Center on Saturday too, with my friend David, seeing The National Chorale perform "Carmina Burana." Excuse me for being lowbrow, but wasn't that music used in "The Omen," or some similar movie about Satan?
Posted by Steve Reed at 10:31 AM