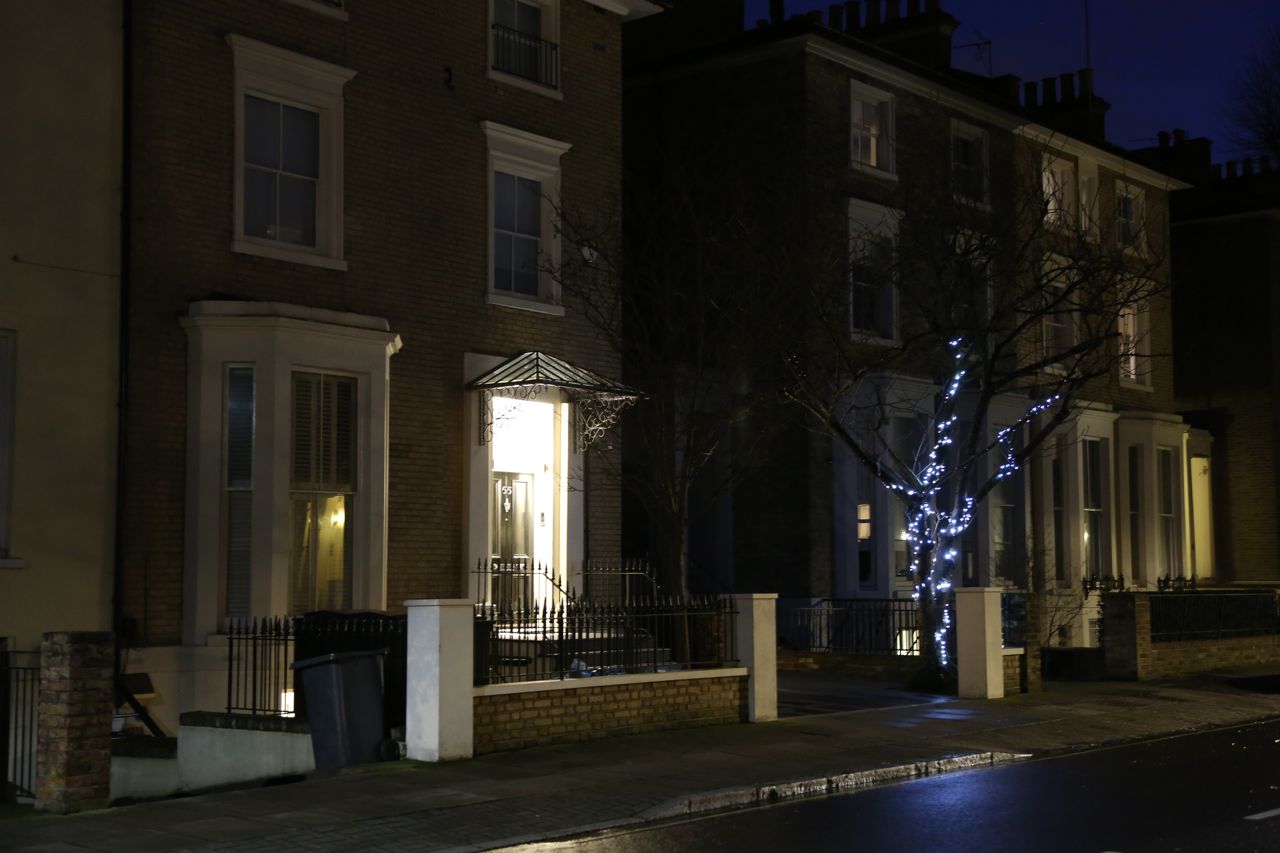 Remember how our upstairs neighbors moved out several months ago? Well, some new residents have moved in -- a man and at least one child, maybe two. I'm not sure the child(ren) live(s) there full-time. What I have noticed, however, is that we get more interesting noises in our flat -- furniture moving around and banging into things, heavy footfalls up and down the stairs, slamming doors. The last two nights, Dave and I were watching TV when suddenly a sound like a helicopter filled the room. I went to the front window to see if some large piece of machinery was rumbling down the street. Then we realized it's the neighbor's washing machine, on spin cycle!

Ah, well. Such are the joys of urban living in close quarters. 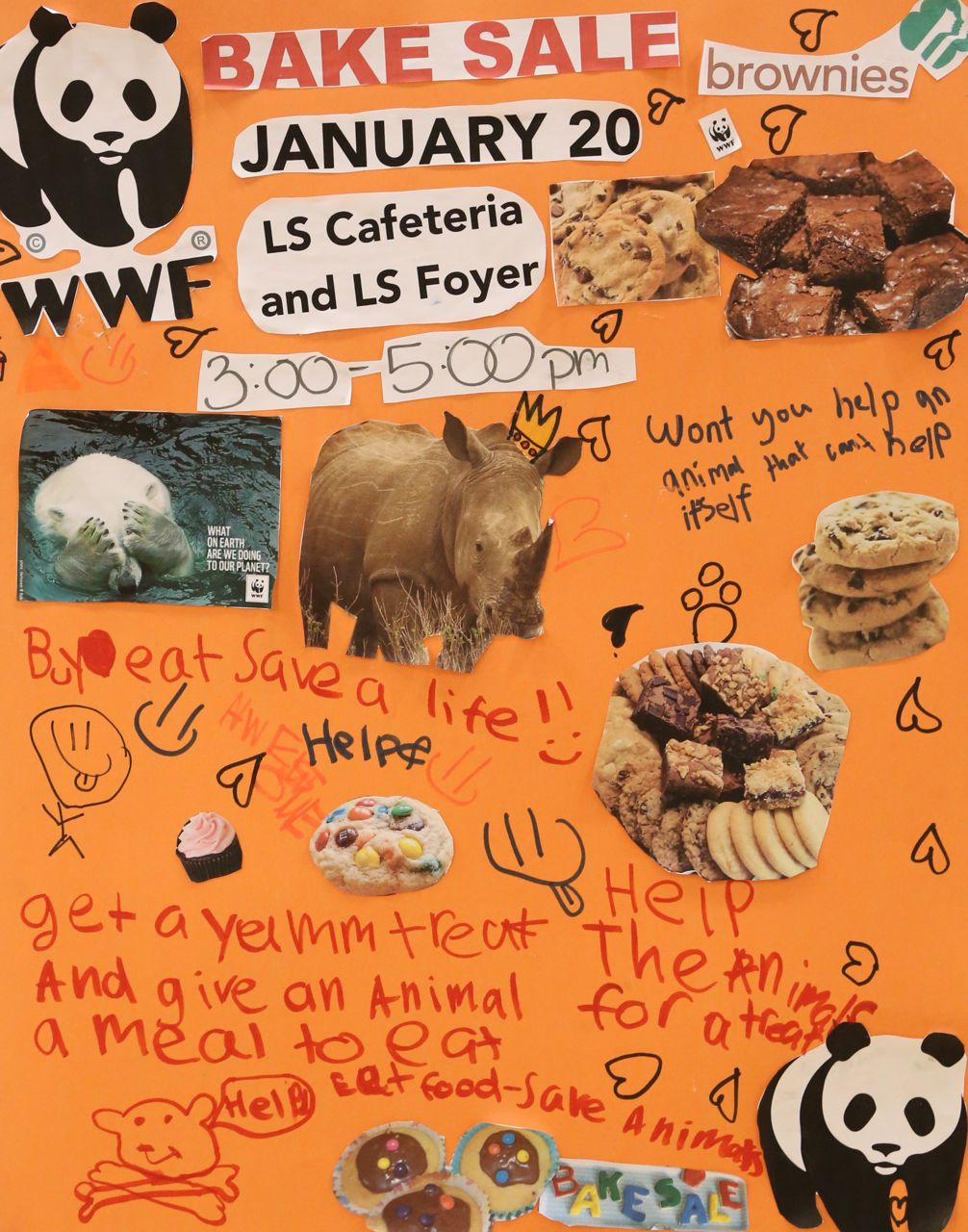 Yesterday I went down to Oxford Street on my lunch hour to pick up some socks and undershirts. I also wanted to just browse the clothes a bit and maybe get a scarf for Dave. I went to Debenham's, which was an ocean of colorless plaid. The only socks I could find were either for boots or were far too dressy. So I went down the street to John Lewis, where I found what I needed but wound up spending more than £100 on eight undershirts and four pairs of socks, which seems a little crazy.

I never did get a scarf for Dave, and I didn't see any other clothes that tempted me.

Clothes shopping does get harder as you get older, doesn't it? I feel like what's in the stores really isn't for me. It's for 25-year-olds who apparently want to recreate the grunge years of Nirvana (the band, not the state of enlightenment). This is why Dave orders everything online. I can kind of appreciate that.

(Photos: Top, night in St. John's Wood. Bottom, a cute poster at school for an upcoming bake sale.)
Posted by Steve Reed at 6:42 AM

I'm with you on the shopping -- it's the same for the ladies. And Los Angeles is an utter hipster nightmare.

I was in Target with Jessie yesterday and I swear to you- the clothes looked like crap. Crap, crap, tacky cheap polyester crap. Like, Walmart wouldn't carry such crap.
Jessie said, "It's the style."
Ugh.
Not that Target is exactly haute couture but still.

It is interesting that the people generally who can afford to shop and pay for things either day of sale or at least that month are the people that are seemingly not made to feel "welcome" in many retail stores. I went to a Puma store for a pair of shoes and the employees there were actually giggling that an older guy like me might want Pumas. I just got them online. Screw the store.

right? it's all faded and slashed and ragged and all aimed at kids. or else it's totally frumpy. I can't order on line because if it doesn't fit then I have to pay to send it back as well as receive it. the sizing for women's clothes at least is totally crazy. depends on what department you are in because the exact same actual size of the clothing can be tagged three different sizes.

Yup...unfortunately, everyone's right about this. The moral of this story...Unless you absolutely need something and must try on, go online.

That POSTER! I am not sure but I do not think it would be a good idea to feed Pandas brownies. As for the basics, buying underwear and tshirts here in the PNW is easy. Costco sells bales of athletic socks for about ten bucks, My husband wears them , they wear really well, but of course he has a rather casual tshirt, ball cap style...Pretty lax in this area, fashion is not a thing!

That does see like quite a lot of money for undershirts and socks. But, when I think about how much one pair of socks costs I guess that's about right.
I'm lucky that I live on the top floor and only have a neighbor with an adjoining wall on one side. I rarely hear any noise from them at all. Sometimes I think I heard more noise from neighbors when I was living in the house.

I love the phrase "a colorless sea of plaid."

Hosting dinner parties can be great or it can be a pain in the ass. I bet you weren't as outwardly cranky as you imagine.

As for mid-life crisis, my working theory is that during the 40s, people need to build character so they'll have the guts to grow old. It's a challenging decade, also rewarding, but oy! Sorry you're having to slog through it.

Like you, I dream of spring. Battles of Sommes? Ha!

An ocean of colorless plaid.

I sympathise! I don't often buy clothes now apart from the odd charity shop purchase and other necessary things. I feel I should learn to make clothes but I never had the patience for it in the past. I have noticed that suddenly all the young people are wearing massive tartan scarves-more blankets really. It is as if they all went out overnight and got them. Maybe they are in Primark or somewhere.
I have not looked at the dragonfly this week but the bees a bit further up are still there. They are on the other side of the road as you walk up past the market stalls. There is a set of traffic lights on that junction. Not sure if I put them on the blog. Have fun!

Oh man I hate shopping - especially for clothing. A friend gave me a gift card for an upscale running store & I wandered around in there aimlessly for a while. And yet I still left with $200 worth of stuff (the card was for $100).

Elizabeth: I remember my mom complaining about this phenomenon when she was my age. So I suppose it's nothing new.

Ms Moon: I guess it IS the style. Why do people want to look so unwashed?

Utah: I really try to support retail stores, but I often find they don't have what I want. I think retailers have actually narrowed the availability in their stores, reasoning that if people want something unusual (size 10.5 EEE shoes, for example) they'll get them online.

Ellen: Exactly! It looks like Kurt Cobain's laundry from 30 years ago!

E: I guess so. I hate to abandon the "shop local" thing, but sometimes shopping locally just doesn't work.

Linda Sue: Isn't that a great poster?? It made me smile. I wish we had a Costco here!

Sharon: I probably should have waited until I went back to the states in February. I bet I could have gotten a better deal at Target. Or I should have tried Marks & Spencer, which I believe you suggested at some point.

Reya: My 40s don't seem like a slog, exactly, but I definitely don't have the energy and optimism if my 30s!

Sarah: I've seen those scarves! In fact, I think we have some in the library lost-and-found at the moment. :) Thanks for the graff update.

Bug: Well, at least you had a productive outing! Shopping is not my thing either. In addition to style issues -- too many decisions. Too complicated.