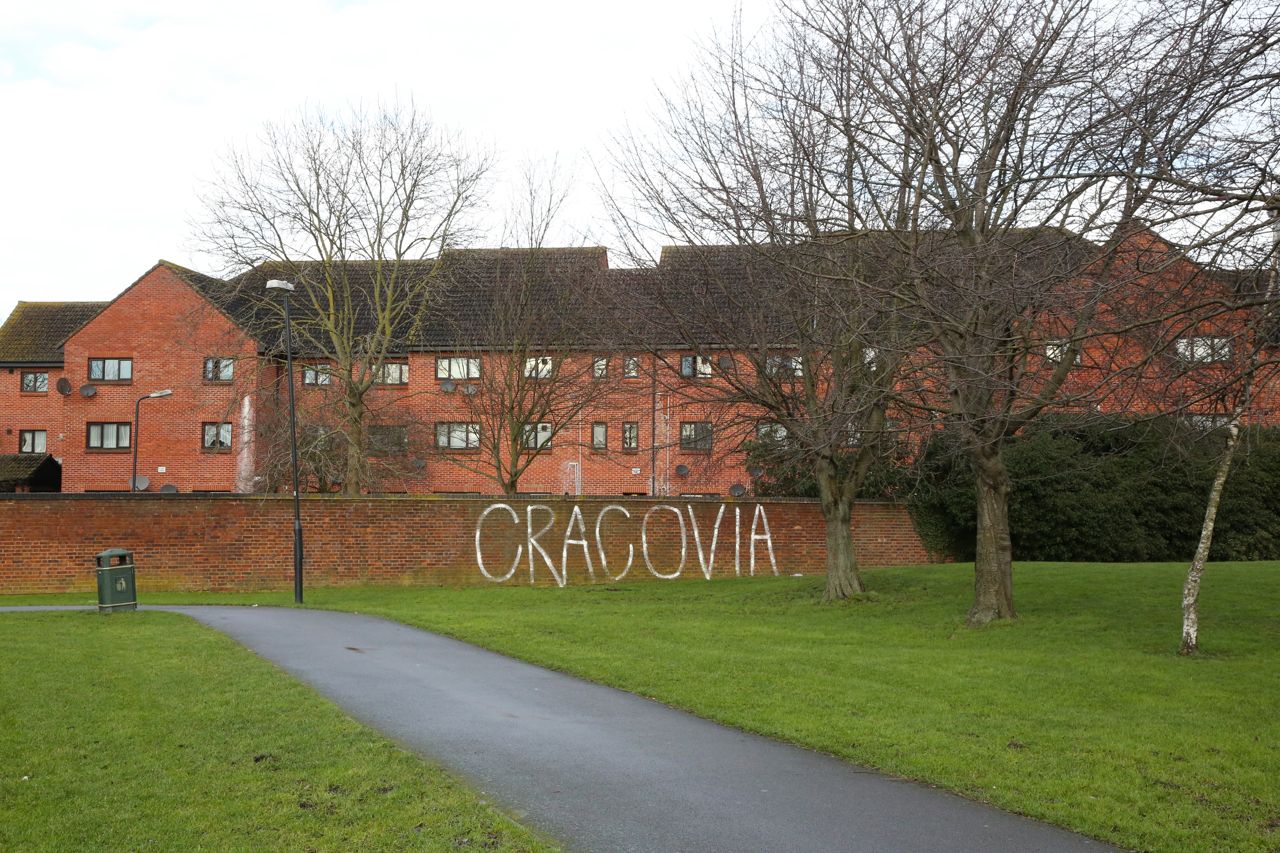 Friday, at last! My God, this has been a long week.

When I found this wall (above) during my walk near Neasden last weekend, I had no idea what it meant. I thought it was someone's joke about the neighborhood -- an allusion to crack cocaine, maybe? But it turns out that Cracovia is the oldest existing Polish football club. So just the work of a sports fan, not a social commenter. 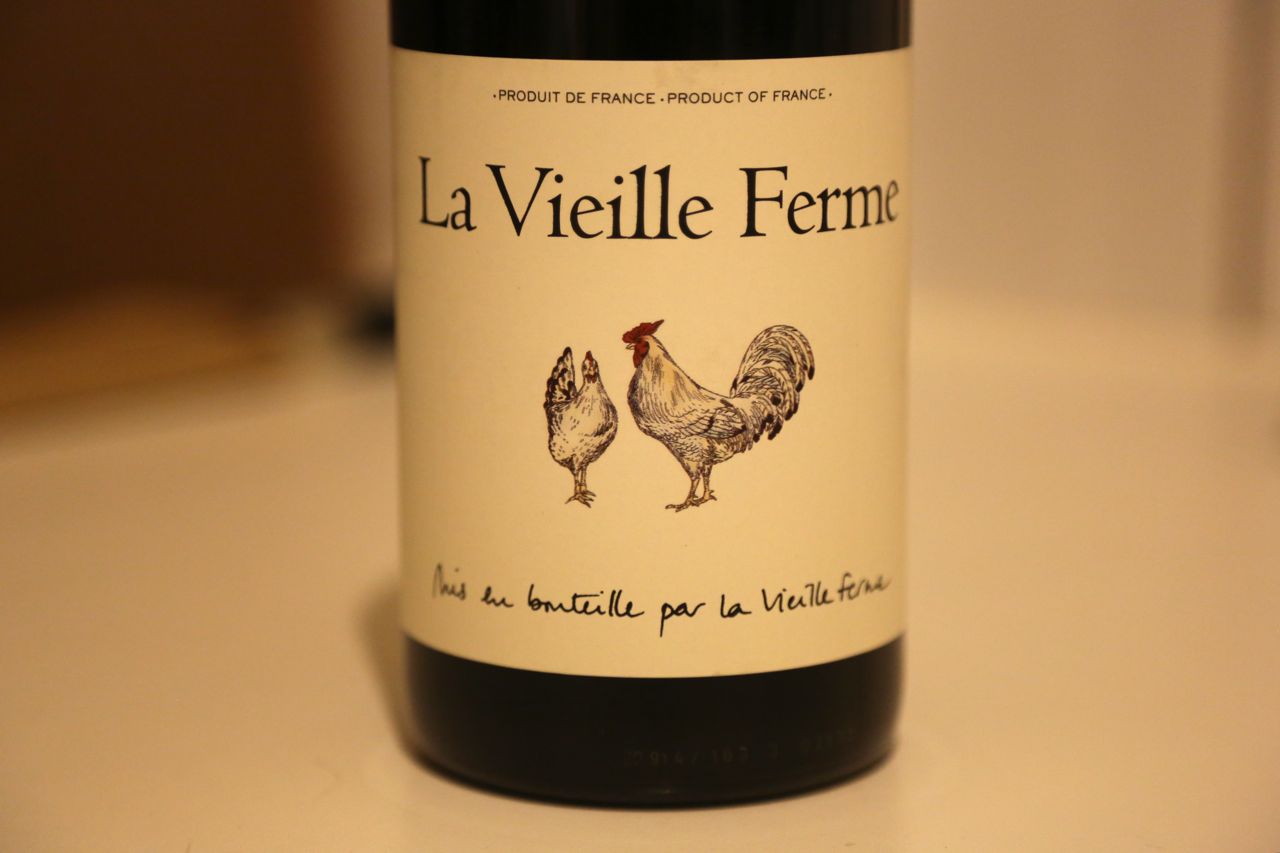 Here's the wine we bought yesterday for dinner tonight. I thought Ms. Moon would appreciate it! The name translates to "The Old Farmhouse," which sounds like it should be earthy, charming and cheap. It was definitely the latter -- we'll see about the former.

I'm sure you all heard about the ridiculous assertions from Fox News in the wake of the Charlie Hebdo massacre that parts of Europe, including the entire city of Birmingham, are essentially off-limits to non-Muslims. I was impressed that Fox was shamed into apologizing for this absurd untruth, but when I began looking around on the Internet for the source of that information, I was alarmed at how many right-wingers perpetuate similar notions. Let me state on the record: I went to Birmingham not long ago! Me, a non-Muslim, and a gay one at that! Not only was I not subjected to Sharia law, I wasn't even noticed.

The Fox alarmists and their ilk seize on the actions of a few fringe outliers to be representative of the entire Muslim community. Yes, there are sometimes culture clashes. If Dave and I walked through predominantly Muslim neighborhoods in Walthamstow or Whitechapel holding hands, we probably would be challenged. But we'd also be challenged in a lot of white, middle-class neighborhoods in the United States. (Again, for the record, I've walked through a lot of Muslim neighborhoods in London and I've never had a problem.)

By the way, that beautiful library that we toured in Birmingham (see the link) has been suffering at the hands of municipal budget cutters. I read recently that it was drastically reducing its hours and cutting more than half its staff. Sad. (I am now even more confident that I'm doing the right thing by not investing in a library science degree, something I had considered. I'm not sure there would ultimately be a return on that investment.)
Posted by Steve Reed at 6:12 AM

In Egypt, which is a Muslim country I often saw men walking along holding hands. Apparently it only means the men are friends having a conversation as they walk, no sexual overtones thought of.

Actually, you're totally right -- I saw the same thing in Morocco. It's very common in the Muslim world for men to hold hands in a friendly way.

I guess I should have said if Dave and I gave any indication of a romantic relationship we would be challenged.

Of course I love that wine label! It looks to picture Elvis and one of the hens!
Fox "News" is going to really go off the edge one of these days.
I love that you thought that "Cracovia" might be a statement concerning crack cocaine. I can totally see that.

And defunding libraries is even a surer sign of the decimation of civilization than the presence of Fox "News."

we buy Rex Goliath wine which has a big rooster on it's label. It's a cheap but good wine. Anyway I read somewhere that only a very small percentage of the population can tell the difference between an expensive wine and a cheap wine. so cheap wine it is!

Fox is totally unscrupulous. they lie, they know they lie and they do it anyway and they don't care what effect their lies have on other people, especially the people they are lying about.

I never watch Fox News. I like my news to be a bit more accurate than what they espouse.
I really can't imagine how miserable a person has to be to live their lives hating everyone who is different than them.
Love that wine label. Let us know if it was good.

Good point (Fox News part) and interesting about the football club name. I would have taken a photo of that too! It reminds me of a photo I took a few years ago during the bad snow when someone had written SNOW in giant capitals on the wall of Greenwich park, using snow as their medium.

Love that wine label! Wine makers are so clever...

I've been told about some British libraries being closed and I was horrified.

Nothing I like better than seeing Fox News taken down a peg.
And how funny - I've bought that same wine here in the US from time to time.