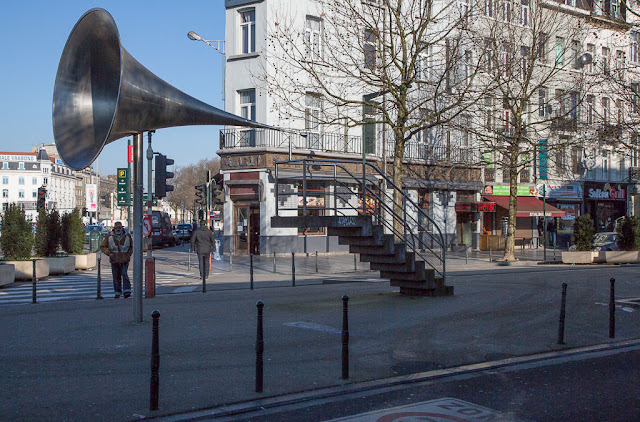 Yesterday I mentioned that almost immediately upon my arrival in Brussels on Wednesday, I found myself in a conflict with a local.

At about 10:30 a.m., I was walking on the Avenue de Stalingrad from the train station to the center of the city.  I was noticing the interesting shopfronts, many with Arabic writing and Middle Eastern or North African names and themes. The avenue has a wide median with trees and benches, and I was standing in the median taking pictures of a tree shadow across a closed shop.

Suddenly a young, bearded, brown-eyed man came out of a doorway and, yelling at the top of his lungs, ran straight at me.

I scarcely had time to react before he grabbed me by the jacket and shook me, yelling in my face something about mon maison -- probably "Why are you taking pictures of my house?" (As mentioned, I was photographing an apparently vacant shop, not the windows he pointed to above the shop, in what was not a house but clearly a multi-story apartment building. But I understand the confusion.)

I tried to explain but the guy didn't want to hear it. He pushed me and hit my camera several times and bellowed "DELETE! DELETE! DELETE!" inches from my face.

People were emerging from shops up and down the street to watch this very loud spectacle.

I've always wondered what I would do if asked (!) to delete a photo. In some cases, I might try to state my case in a friendly way -- but that was clearly not the path to take here. This guy was flat-out enraged. I have been challenged by people before while taking pictures, but never with this much volume, venom and violence.

So I deleted the pictures, allowing him to watch as I did so. (They weren't that great anyway.)

When I finished, he grabbed my jacket again and pushed me backwards, so that I very nearly fell. I turned right around and walked away, wanting only to get out of there. I passed an old man on a bench, who looked at me sympathetically and wobbled his hand beside his head -- the international "crazy" gesture. I nodded in agreement.

Now, I know that street photography is not everybody's thing. But photographing the exterior of an urban building, on a street that visitors must frequent often, hardly seems transgressive. Google Streetview? Real estate agents? His reaction was clearly off the charts -- unless he was genuinely mentally ill, or traumatized, or hiding something, or all three. And who knows. Maybe he was.

I considered going to the police. But in the end, I wasn't hurt, my camera wasn't damaged, and while being pushed around and manhandled could perhaps be considered some kind of assault, I didn't want to spend my one day in Brussels in a police station. I felt like it was best to let the whole thing lie.

(Photo: A sculpture known as La Pasionara, on Avenue de Stalingrad, just a short distance from where my altercation occurred. Ironically, it represents freedom of personal expression.)
Posted by Steve Reed at 7:22 AM

Yikes. That is really scary. I so admire you for keeping your cool. Stay safe, Steve!

I have had a similar experience recently Steve. Some dumb people think they have a God-given right to deny photographers the liberty to press our camera buttons. Like you, I walked away. I looked into the fellow's eyes and saw the pinched, meanness of his life, his frustrated dreams, his rural isolation and though he may not have realised it I was feeling sorry for him - that was my main reaction. I could have easily responded - perhaps got into a fight or something but I was keenly aware that I didn't want to wind up the situation. Instead I wanted to defuse it.

I am sorry that your meeting with that angry, bullying prick cast a bit of a shadow over your nice little trip to Brussels. Well done for walking away!

That's a scary thing to happen! I don't understand people who go straight in with violence. He must be a very paranoid man. I'm glad you got out without being hurt physically.

I'm sure there were extenuating circumstances that led up to his reaction. That said I still would have shot him.

I would have been shaking all day long. I think you did the right thing though...simply to get out of the situation and move on with your day.
No need or even any way to know what was going on in that man's mind.

wow. he got physical. you would think if he was hiding something or doing something illegal he wouldn't draw attention to himself that way. maybe he just had a fight with someone and you were convenient to vent his wrath. I don't know if I would have accommodated him like that. I might have been inclined to push back and start yelling at him to take his hands off me. definitely, I would have just walked away without deleting the pictures.

Oh my goodness, I would have been terrified I think and I'm afraid it would have put a damper on my whole day. Good for you for pressing on.

I wonder how he would have handled a woman photog? And, as usual, where's cop when you need one? You were smart in handling this the way you did...bravo!

Scary! My stomach tied in knots reading this! Stella and I have been yelled at while taking photos of the outside of a shop in Venice, we just smile and act like we do not understand. but never been man handled ,which would result in police action to be sure. Crazy! Paranoia!

Very frightening - I think you did the safest thing and then got the heck out of there. Like a couple other commenters, it would have left me wracked with nerves and unable to enjoy the rest of the day. So kudos for moving on, wringing the best out of the trip, and getting OTHER lovely shots! I'm glad you got out of that situation safely.

Ugh - I would have been SO UPSET. And probably cried. VERY annoying.

LOL at your brother. Are you sure you're related? :)

That's very scary and i'm sure it left you shook up. The guy is very lucky that you didn't take a round out of him.

Wow...I'm sorry you found yourself in such a scary situation...You were right to let it go...

Not what you are expecting or wanting but what you sometimes get, under some circumstances.

How awful for you, Steve! I think we now live in a thoroughly paranoid world, and for those frequently profiled, even when hiding nothing, anything can seem like jeopardy. that's my read of the situation, but good lord, he handled it so poorly. I'm so sorry you had to endure that.