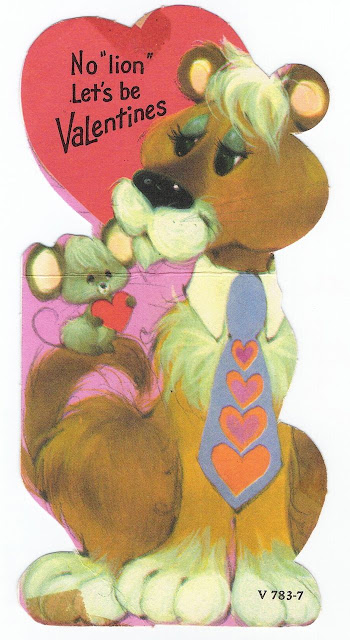 So, as I've mentioned, I've been cleaning things out lately. In the middle of a cache of old letters I came across this little stack of old valentines from the mid-'70s. I have no idea why I saved these and not others -- they aren't even from particularly close friends, just classmates. 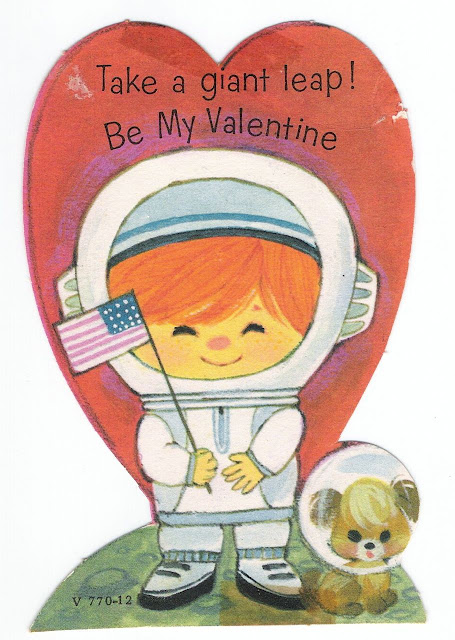 This one is very space-age, isn't it? Just a few years after the moon landing! 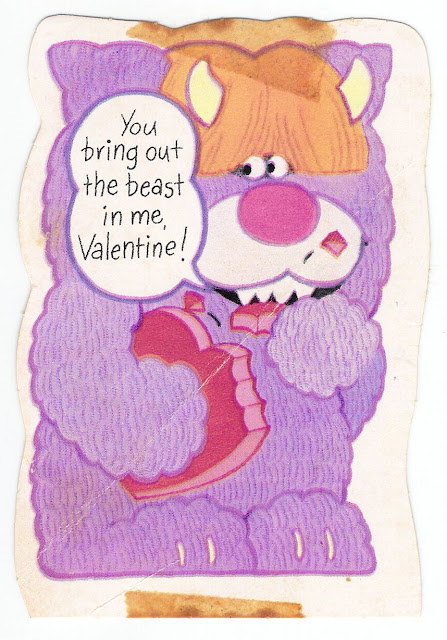 Do they still make little paper valentines like this, to be handed out in classrooms and such? Are they still free from product and movie tie-ins or are they all based on Disney characters now? 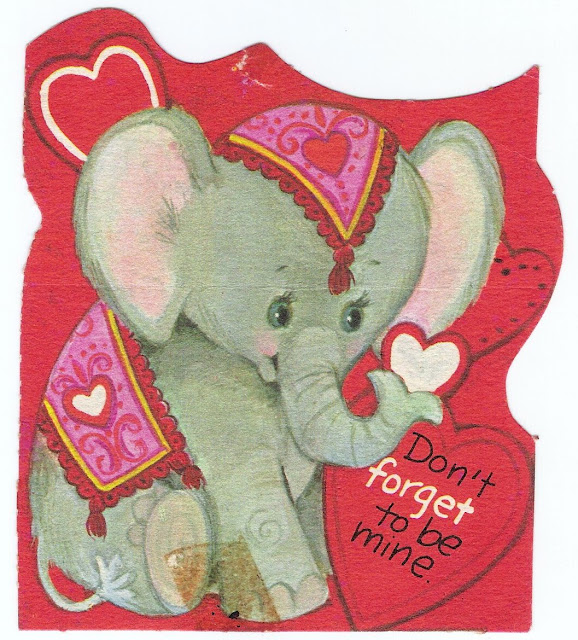 I suppose this one could be Dumbo. 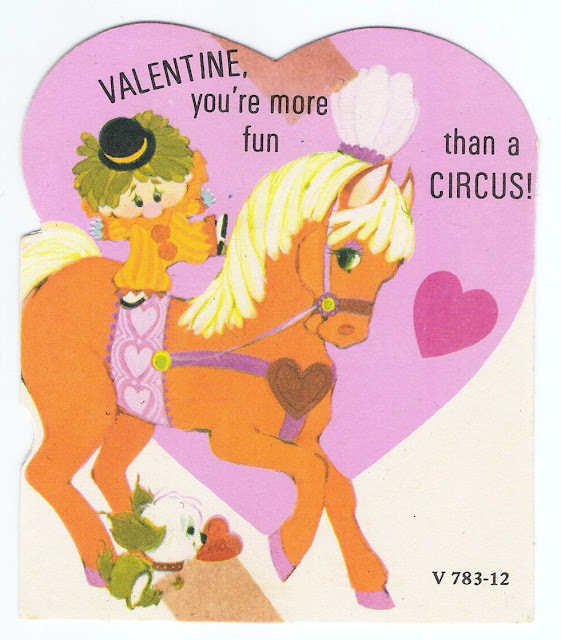 Definitely a circus theme, here. I think I saved all these because they feature animals. 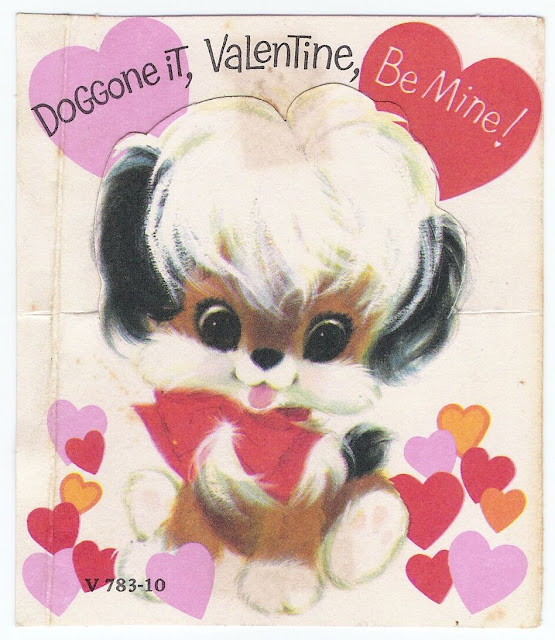 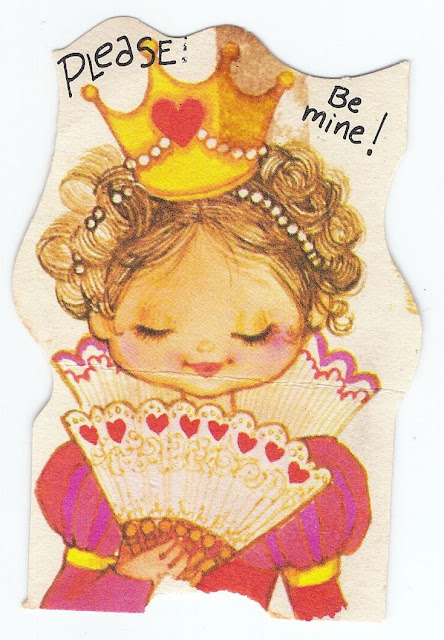 But then there's this one. I have no idea why it merited saving. 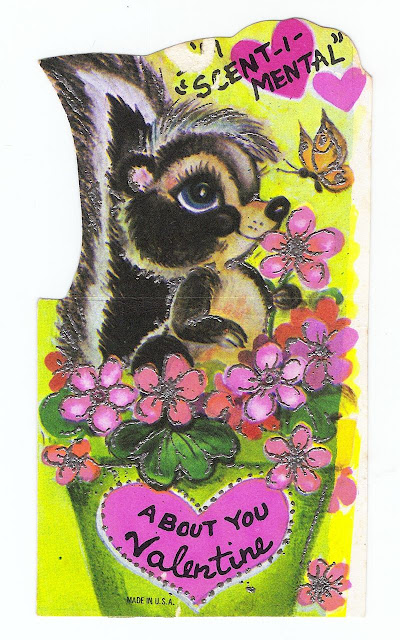 They're very pink, aren't they?

Anyway, I hope all of you have a happy Valentine's Day, for what it's worth. Dave and I are pretty much ignoring it. We might go to dinner later this week, but we're treating today like any other.

I'm just waking up to the news about Justice Scalia. Not one of my favorite people, needless to say. So in addition to a presidential election cycle we now get to witness the drama surrounding a Supreme Court nomination. When it rains, it pours!
Posted by Steve Reed at 5:54 AM

I believe those Valentine cards are what we might call "kitsch". Who knows, you might be the only person in the world who saved such examples that point to what everyday life was like as recently as the nineteen seventies. Keep them Steve!

Dear Steve,
Will you be my Valentine?
Love...Ms. Moon
So. Did you throw those out or are you keeping them?

I wonder if they do still sell those types of Valentines. I don't think I've seen any but, I haven't been looking.
Yes, the Scalia death will cause all kinds of ripples especially in the election campaigning.

ding dong the witch is dead. Valentine's day is my least favorite besides the forth of July, I will just be in my studio listening to music and poetry. If you get a chance to see Michael Moore's new film do so! It is really good, and funny. AND I am even more determined to leave this broken country. It is so harsh! Just trying to figure out finances and where to land.

I sort of love Valentine's Day and have such happy memories of childhood -- making the little shoebox covered in paper to hold the Valentines that looked exactly like the ones that you have. We must be about the same age --

And Justice Scalia. No loss there. I'm not afraid to say it, actually. He did live a long life, after all, and he sure did enough damage for liberal people.

York: They ARE quite kitsch, it's true! Anything this pink is kitsch by definition.

Ms Moon: I tossed them. If they were from people I knew well I might have saved them, but they weren't!

Sharon: I wonder. Maybe schools don't encourage handing them out because some kids might not get any?! I honestly don't know.

Jenny-O: Doubtful! I went for the latter option. :)

Linda Sue: I'm not a Valentine fan either, I must say. I'll definitely check out Michael Moore's newest. I AM a fan of his!

Elizabeth: Yeah, we're about the same age, I think! I didn't do the shoebox thing -- at least, I don't remember it -- but I definitely exchanged quantities of these little paper cards. As for Scalia, I'm with you!

I'm lucky that Valentine's day is not as much of a thing here. No meaningless cards to classmates. People would send anonymous things to someone they have a crush on, but that's the nicer side of the holiday I reckon.

seems I missed this post. we don't treat it as a special day either. when my kids were in school, I refused to buy valentines. if they wanted to give them out, they had to make them. I would supply all the necessary supplies. they were the only kids in school that gave out homemade valentines.