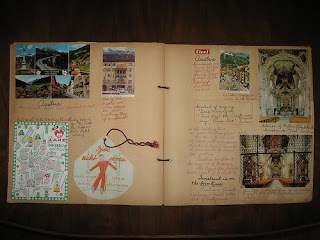 About five years ago, after my Uncle Rudolph died, we got a call from the realtor selling his family home in Avon Park, Fla. Seems several boxes of stuff had been left in the house, including some family photos and documents. Did we want them?

Uncle Rudolph was my great uncle, my grandmother's brother. The house being sold was the one where both of them grew up. Certainly we wanted this stuff. At the next opportunity, my mother and I drove down to Avon Park and retrieved it.

Included in the boxes was this scrapbook, which my Aunt Laurita -- who died in the mid-1990s -- compiled of a trip she and Uncle Rudolph took to Europe in 1968. That was back when flying was stylish and traveling was more exotic than it is today. They did the grand tour: London, Paris, Amsterdam, West Germany, Austria, Rome, Madrid and Lisbon. 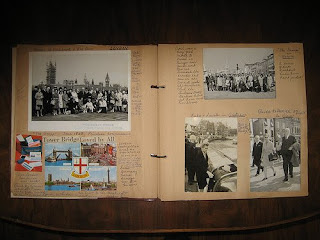 Aunt Laurita was something of a journalist -- she wrote a newspaper column in college and vivid letters all her life. The scrapbook reflects that. It's not just a collage of mementos, but also a collection of handwritten notes about what they saw, from people in their hotels to landmarks and facts about each country.

I love this scrapbook. I love all the '60s-style writing on hotel stationery and napkins, and the photos of my great aunt and uncle. I love the notes she took about getting lost in London -- and lost again in Paris. She was funny, my Aunt Laurita.

I put a few pages of the scrapook on Flickr. To see each photo, click on the thumbnail, and scroll your mouse over the page for notes. To see an even bigger version, click the "all sizes" tab above each picture. I wish I'd been able to photograph every page, but there's just too much!
Posted by Steve Reed at 10:31 AM