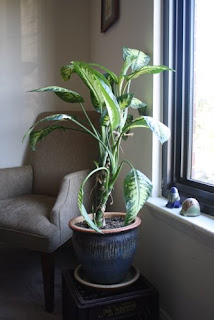 Several months ago -- May or June, I'd say -- I took out the garbage and found some plants in the dumpster. Or, more precisely, pieces of plants. I rescued the ones I thought I could save.

This one, a dieffenbachia, has proven to be the most robust of the lot. When I found it, it had been whacked off at ground level, so it was just a thick stem with some wilted leaves attached. I brought it upstairs and put it in a bucket of water on the balcony, and pretty much left it there all summer.

That was enough time for the plant to grow some roots. Last month, I bought a pot and put the plant in some soil. It has thrived since then, to an almost scary degree. It's doubled the number of leaves it once had and grown a new branch.

We call it "Audrey II." We half expect it to eat us in the middle of the night. Hopefully it will go for the dogs first.
Posted by Steve Reed at 2:43 PM